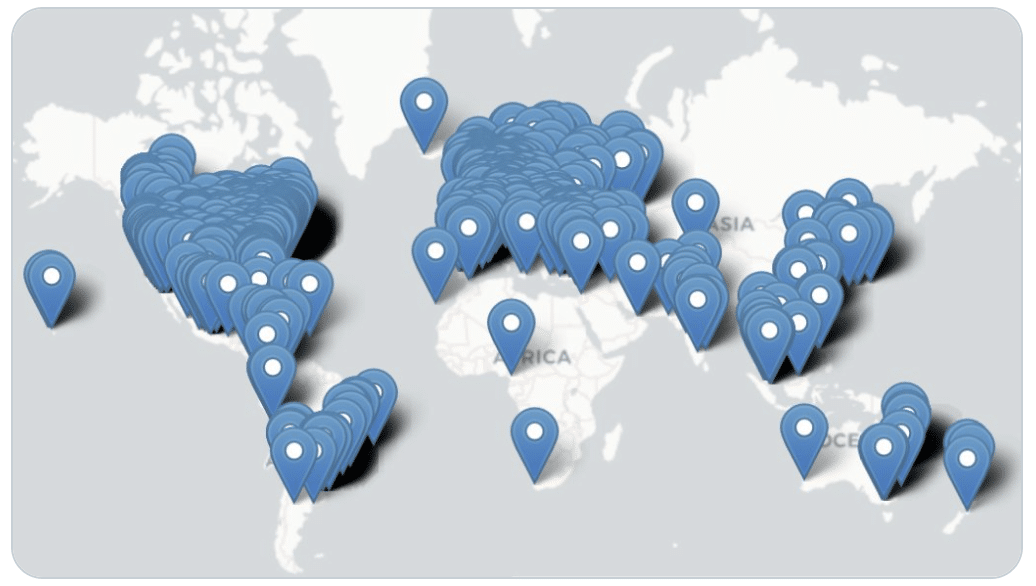 A snapshot of the streaming locations of 3700 attendees for the virtual opening ceremony of Decentral Games’ Atari branded casino.

Dillon Francis played his live stream set on the virtual event that took place in Decentral Games’ newest casino – Atari branded Casino. A record-breaking number of 3700 attendees joined the event, including celebrities. Prior to the launch, three NFTs inspired by Dillon Francis’ pinata Gerald, created in collaboration with Francis and visual artist Merda, were auctioned off on Opensea and other platforms for 6.42 ETH, equivalent to $17000. Gerald the Pinata is famed among fans for being the sidekick of Dillon Francis, and has made multiple appearances alongside Dillon Francis over the years.

Up for grabs on the event were limited edition NFT wearables designed by Francis, which can be used across the metaverse and traded on any major NFT marketplace. Additionally, the launch party’s prize pool was doubled from $10,000 to $20,000 to commemorate the launch with overwhelming attendance.

At the opening ceremony, Decentral Games announced the upcoming launch of virtual club – Dillon Francis Mega Club. Community members of the metaverse can expect exciting electronic dance music events hosted by Dillon and other major names in the music industry being brought in to host live stream sets. There will also be more exciting prizes in the form of celebrity-designed NFTs, meet and greet opportunities, and real life experiences such as trips.

Decentral Games continues to make waves as the leading metaverse experience across Ethereum-based platforms, with their recent announcement of partnering up with leading nightclub Amnesia Ibiza, which is slated in the upcoming months. Metaverse members can also expect a scaled platform to accommodate more attendees concurrently in future events. These partnerships are consistent with Decentral Games’ efforts to revolutionize the music and entertainment industry through creating virtual immersive experiences and leveraging on blockchain technology for partygoers worldwide.

Decentral Games ($DG) is the first community-owned metaverse crypto casino, where you can be the house. Decentral Games is the first DAO (Decentralized Autonomous Organization) to own, govern, and monetize virtual land. It owns an NFT store, an NFT auction house, three casinos including the most recently added Atari Casino. The games are built on Ethereum and Polygon blockchains and are provably fair and non-custodial, with Virtual Reality in the pipeline. The company is backed by key investor Digital Currency Group (DCG), whose main subsidiary Grayscale is the world’s biggest bitcoin and cryptocurrency fund manager and manages $45 billion in assets. Decentral Games was ranked no.1 in Top NFT Projects in 2021 by GenXAnalytics. Decentral Games is a leading metaverse project and has become the first metaverse employer who provides employment opportunities in the metaverse.

Platinum-selling artist, DJ and producer Dillon Francis initially made history in 2012 as “the first moombahton artist to achieve the number-one spot on Beatport” with the Something, Something Awesome EP. Francis has since achieved a string of smashes, including the #1 Dance Radio Airplay hit “Anywhere” [feat. Will Heard], “Candy” [feat. Snappy Jit], #1 Billboard Dance Club Songs chart-topper “Coming Over” with Kygo [feat. James Hersey], and the RIAA platinum-certified “Get Low” with DJ Snake – which surpassed 500 million worldwide streams. He has recently unveiled a brand-new single entitled “Be Somebody” feat. Evie Irie, which EDM Tunes dubbed the “song of the year.”