Unfortunately, the crypto industry is still widely associated with illegal activities, scams and frauds. Though the measures are taken, such projects as CryptoUnit still exist.

The scandal erupted around the OneCoin project reached its peak in the fall of 2019. According to the top management of the project, OneCoin was a cryptography-based digital currency, an analog of bitcoin. However, a targeted review revealed that a fraudulent scheme underlined OneCoin. First of all, despite the numerous statements of the project creators, OneCoin was a fully centralized currency. Tokens were distributed as part of “packages,” the cost of which ranged from € 110 to € 27,500. Users could manage their tokens only via their personal, and it was not possible to track transactions through open sources.

The disclosure of the truth about OneCoin and measures taken concerning the project creators gave hope that due to the emerging trend of exposing scam projects, the sphere related to cryptocurrency will become a comfort zone for the development of the companies that follow regulatory standards and striving for security and transparency.

However, the positive forecasts about transparency increasing have not yet come true. Unfortunately, crypto-sphere filtering is progressing very slowly. While transparent, promising projects adjust to the changing rules and try to gain their place in the market, large-scale scam projects continue to get fraud money.

CryptoUnit is one of such fraud projects, no less ambitious than OneCoin was. The development of this project is carried out by the NEEW group of companies. For a long time, NEEW had another name, SWIG. The group of companies includes SWIG International LTD., GENIUS OF WEALTH LTD., ARTEAM CONSULTANCY LIMITED, ACADEMY OF PRIVATE INVESTMENTS LTD, UK SWTU LTD, BAZALTINVEST LTD, Crowd West Capital, and other companies. Almost all of them are registered in the UK, at 6 Gainsborough Road, London, E11 1HT.

What Is Known About CRU?

The creators of the CryptoUnit project welcome participants to become “co-owners, stakeholders or shareholders” of the global investment portfolio, which includes assets of various segments.

The rules that CryptoUnit relies on exactly follow the OneCoin experience. “Having formed” from an impressive number of subsidiaries, creating dozens of portals in different languages, CryptoUnit is an MLM network. A potential investor can join the global investment portfolio only at the invitation of one of the current network members and by purchasing packages with project tokens. All payments come from funds raised from recently joined members.

If we consider the legal nature of the tokens issued by CryptoUnit, we will find out that they are sold without any legal binding provided for securities. Following the rules established by the legislation on the securities market, issued tokens must be registered and approved by a specific commission.

Also, the project entering STO should have a mechanism for the funds return in case of the project default.

Of course, STO of the CryptoUnit is a myth. However, the information about their STO has been published on numerous project websites for nearly a year.

As mentioned above, portals dedicated to CryptoUnit have identical information. Information on the STO entering and agitation to buy tokens themselves or certificates for tokens are published in different languages. Here are the examples: the official website in English (as well as dubbing portals: www.cryptounitpro.com, cru.today, www.cryptounit.be, and others), in Russian, in Spanish, Italian, and Chinese. We should also mention the personal website of the project’s creator, Andrei Khovratov. Also, users are attracted and supported by numerous groups on social networks, that are managed in different languages, including Hindi.

CRU Selling to the CIS Countries

Most portals like futurecru.com provide detailed instructions on how to contribute to a global investment portfolio, from registration to checkout. It is written here, that CRUs are security tokens issued on the blockchain via Security Token Offering (STO).

Recently, the organizers of this MLM network adopted a clausure. Currently, several sites dedicated to the project include the note that CryptoUnit is only going to enter STO soon. According to the information presented on this recently updated portal, the full completion of the STO is scheduled for November 1, 2020.

It is worth noting that the majority of the cloned websites have not yet been updated. They present the information about STO as an already accomplished fact and invite investors to buy CRU tokens. The certificate or Training Packages are not mentioned.

On the official portal of the NEEW group of companies, in the whitepaper, the same information is provided as in Russian-language sources: namely, users are invited to become co-owners and shareholders. The document also indicates the planned STO roadmap.

However, even though the CryptoUnit creators plan STO and the tokens issue for the future, they offer CRU as the only currency to pay for their courses on investing. 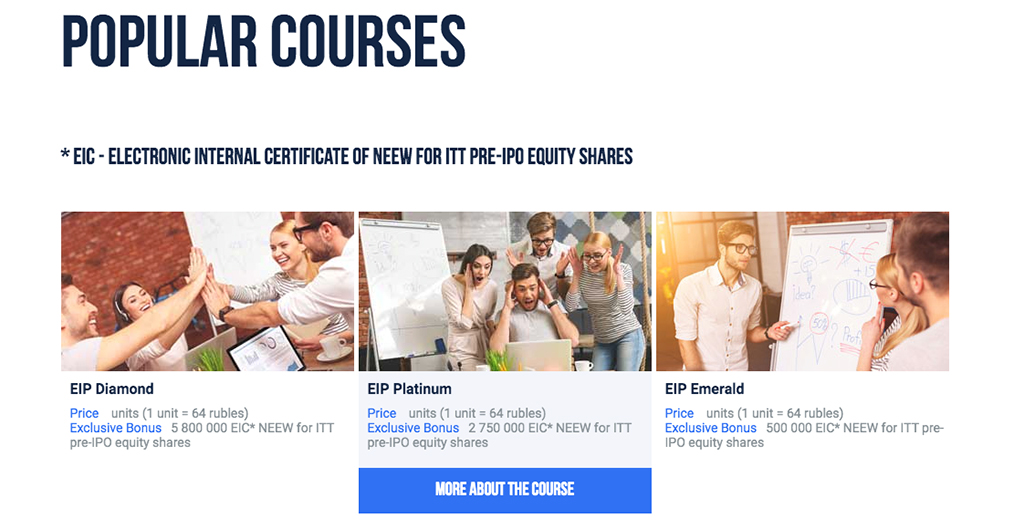 When you try to register for the course, you will be redirected to the registration page. But to register, you have to indicate the login of the person who has invited you to join. One of the personal account owners stated that access to the courses is only possible for CRU tokens.

It would seem that another scam project is not worth attention. However, the project’s gigantic scale is scary. Vast amounts of money are spent on “recruiting” new participants in the so-called global investment project.

There is an obvious inconsistent project policy and evidence of the intentional misrepresentation of users. For example, the user can be invited to receive a welcome bonus – 150 CRU – just for registering a personal account until a fixed date. It is especially noted that verification during registration is not required.

Of course, such actions attract people who are new to the investments, who do not understand the legal nuances. From a psychological point of view, welcome bonuses attract users, give them the illusion that passive income takes place in the context of this project.

How else does CryptoUnit lure into its network?

On event aggregation sites from different countries, you can easily find invitations to past and upcoming NEEW training events, including webinars and offline meetings. Here is the announcement of an event held in Alicante in August 2019. On this portal, potential investors were invited to attend a training event in Mallorca. The schedule of events for 2020 can be easily found on this site.

It is not possible to accurately calculate the size of the CryptoUnit community. If you focus on groups on social networks, schedules, photos, and video reports of events, you will possibly conclude that we are talking about thousands of people from all over the world.

For example, the official YouTube channel has 28 thousand subscribers. The photos from NEEW (formerly SWIG) events can be easily found. They amaze with brightness and scope: huge stadiums, colorful multinational outfits, invited dancers, and circus artists – unthinkable money is spent on these props. And these events are fully paid from the wallets of investors.

You can appreciate the scope by looking at the photos taken at the event in honor of the fifth anniversary of the company, EVENTI2019, held in New Delhi. By the way, numerous video reviews and footage from the event can be found here.

Rebranding in an Attempt to Erase Traces

According to one of the owners of CRU tokens, in November 2019, a change of company name from SWIG to NEEW was announced in the investor’s so-called personal accounts. This abbreviation stands for “New Economic Evolution of the World,” and it has been widely used in the materials of the company’s group before, but not as a group’s name.

According to one of the personal accounts owners, the announcement of rebranding was accompanied by instructions. The instructions strictly prohibited the former names of the group of companies usage. The guidelines also contained a threat that the usage of the previous titles of the companies included in the group will be regarded as sabotage. Accounts of violators will be blocked without the right to restore.

In other words, if a participant inadvertently uses one of the previous titles, he will automatically lose all tokens in which he invested his funds. No respect at all, isn’t it?

Who The Creators Are

The founder of the group of companies, Andrei Khovratov, considers himself to be one of the prominent leaders of Russia and sometimes publishes photos confirming this fact on his own and corporate social networks. However, you will not find photos of Khovratov on any resource that is not involved in the NEEW group of companies.

According to one of the network participants, at a recent webinar, Andrey Khovratov announced that over 124 million dollars had been raised over the past year. How are funds distributed in a group of companies? It is not difficult to guess: Khovratov single-handedly disposes of assets, all expenses occur only at his discretion.

Almost all of the companies included in the group (SWIG International LTD., GENIUS OF WEALTH LTD., ARTEAM CONSULTANCY LIMITED, ACADEMY OF PRIVATE INVESTMENTS LTD, UK SWTU LTD, BAZALTINVEST LTD, Crowd West Capital, and others) are registered with some Margarita Sevastyanova 1976 year of birth and Armands Murnieks.

The CryptoUnit fraudulent scheme was brought to the attention of the authorities of New Zealand. The journalist of the New Zealand version of stuff in an article dated September 8, 2019, noted that the Financial Markets Authority (FMA) was urged to exercise caution, suspecting that NEEW was acting under fraudulent schemes. Other media also reposted the warning. The author of the article dated September 9, 2019, on newshub.co.nz, it is noted that the adviser to South Auckland (New Zealand) called the system by which NEEW operates “disgusting.” The article indicates that hundreds of people attended training events hosted by NEEW, and many of them lost their money.

Today, London is taking strenuous measures against the NEEW group of companies and the CryptoUnit project, initiating litigation and blocking accounts. Decisions to block accounts were made by the Westminster court, started by a member of the London police Joseph Ford (AFI Joseph Ford).

Unfortunately, such measures haven’t lead to success yet. The NEEW top managers open new accounts to replace the frozen ones and continue to actively attract gullible investors, selling them tokens that exist only in website account and are unlikely ever to come close to being traded on exchanges.

Information about the OneCoin scam project has spread all over the world, and team members received up to 90 years in prison and multi-million fines. Surely now, there are no people who would believe in OneCoin and decide to invest in it.

Unfortunately, despite the emerging trend, the process of filtering and cleaning the crypto sphere is prolonged: while some scammers get what they deserve, other scam projects continue to openly operate basing on fraudulent schemes, not paying attention to the prohibitions.

We can only hope that the creators of the NEEW group of companies and other scam projects will soon receive prison sentences – because, it seems, only such measures can stop them.

A 28 year old Japanese that loves Blockchain, Cryptocurrency and Tokenomics.

Epic Cash is a product that is planning to improve globalization through blockchain technology.

The use of the digital yuan at the Winter Olympics signals the culmination of a development that started in 2020 for China.

While the overall cryptocurrency market lost $300 billion dropping below the $2 trillion valuation, Bitcoin and the altcoin market each contributed a fall of $150 billion.

A Digital Rewards Platform for Creators and their Supporters

The future of automotive DeFi

Join the biggest ICO of 2021 with the most profitable affiliate program!

A foundational layer for cross‑chain compatibility