Zhongshan International Games&Amusement Fair (G&A) is currently one of the most professional industry exhibition in China. It aims to create an international, authoritative and efficient industrial platform and promote cooperation between overseas and domestic amusement industry.

In 2008, the first G&A Show was successfully held with a trade turnover of 1.23 billion RMB, making it the industry’s most forward-looking and attractive high-end business event. In 2009, the Expo attracted 166 companies to exhibit, gathering more than 15,000 professional buyers, and the trade turnover reached 2.08 billion RMB, which has become an important brand for China’s diversified and international exhibitions.

From 2010 to 2017, the scale of G&A increased from 44,000 square meters to 100,000 square meters, and the number of exhibitors increased from 243 to 450, and the trade turnover of trade intentions has continued to increase, reaching 3.51 billion RMB, which has established an important position in the grand blueprint for the construction of the provincial cultural industry. 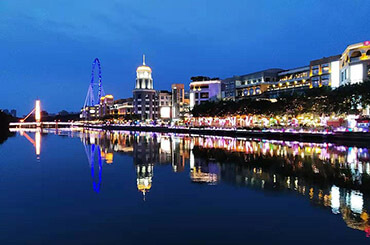 Zhongshan is a prefecture-level city in the south of the Pearl River Delta in Guangdong province, China, with a population of over 3 million.