More than 245,000 people have now been confirmed with the coronavirus globally, of which at least 85,000 have recovered from COVID-19, while more than 10,000 have died. Bank of America has already stated that the recession is here.

The number of people infected with the novel coronavirus surpassed 200,000 yesterday and it’s still rapidly growing. At 8:18 am CET so, around 12 hours after those numbers were announced, this number grew to already 245,997. Bank of America announced the beginning of the recession.

According to the World Health Organization (WHO), most of these cases are now spreading outside the China even though it is exactly China, province of Wuhan where everything has started. Also, the coronavirus death toll surpassed 10,000 people yesterday and now stands at 10,048. A dash of light maybe can be seen in the fact that, according to the latest information from John Hopkins University, the number of totally recovered is 88,465.

Bank of America has already warned the society:

“We are officially declaring that the economy has fallen into a recession … joining the rest of the world, and it is a deep plunge. Jobs will be lost, wealth will be destroyed and confidence depressed.”

Especially, the bank said that the second quarter of the year will be the most challenging for the economy. GDP for the full year will also be affected. While the stock market is under bear trends, the labor market can also seriously suffer.

The unemployment rate may double. According to Bank of America, amid the recession around 3.5 million people will lose their jobs.

Even though almost half of all cases in the world are in China, Europe became center of this virus. Yesterday, 427 new deaths from coronavirus have been reported in Italy, bringing the country’s overall death toll up to surpass China’s. The Italian authorities said that, in total, 3,405 people have died from COVID-19, the Italian authorities revealed, compared to 3,248 in China.

The number of new cases confirmed surged by 5,322, a new world record, to reach 41,035, which includes 4,440 of those who successfully recovered. Total cases now amount to more than half of that of China, with by far the largest number per every million people, at 679.

According to projections from Italian professor of theoretical physics at the University of Rome, Federico Ricci-Tersenghi, up to 10,000 more people could die in Italy due to coronavirus in the next three weeks.

The professor created a graph and posted it on his Facebook page, showing a possibility of an exponential increase in the death toll in Italy over the next 3 weeks. He based his model on the trends observed in China, but underlined that scenarios depend on human behavior. 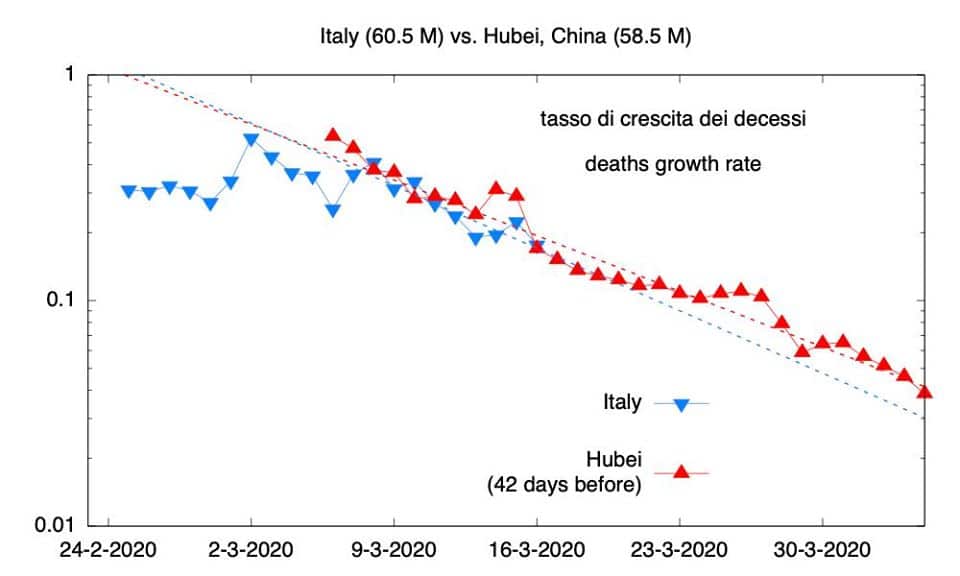 On January 20, four countries, China, Thailand, Japan and South Korea had reported a total of 282 cases, most of which were in China, according to the WHO. South Korean health authorities said on Friday that the number of newly registered COVID-19 cases in the country climbed by 87 from the previous update, bringing the total number of infections to 8,652.

The spread of the virus in South Korea is showing signs of slowing down as South Korea reported under 100 new daily cases for five out of last six days.

The WHO, however, criticized slow reactions by some countries as well as their lack of communication with their citizens, not taking proactive containment measures and not committing politically to combat the virus.

However, he added that the first trials of a possible vaccine against coronavirus have already begun “just 60 days after the genetic sequence of the coronavirus was shared. This is an incredible achievement.”

To ease the virus spread, governments across the world are closing schools, restricting travel and ordering people to remain in their homes. European leaders agreed Tuesday to close the European Union’s external borders for 30 days. Last week, U.S. President Donald Trump declared a similar travel ban on most European countries and this week he closed the border with Canada.

Markets make a strong rebound with some analysts believing that the bottom could be already in. Banking giants make strong gains on Tuesday.