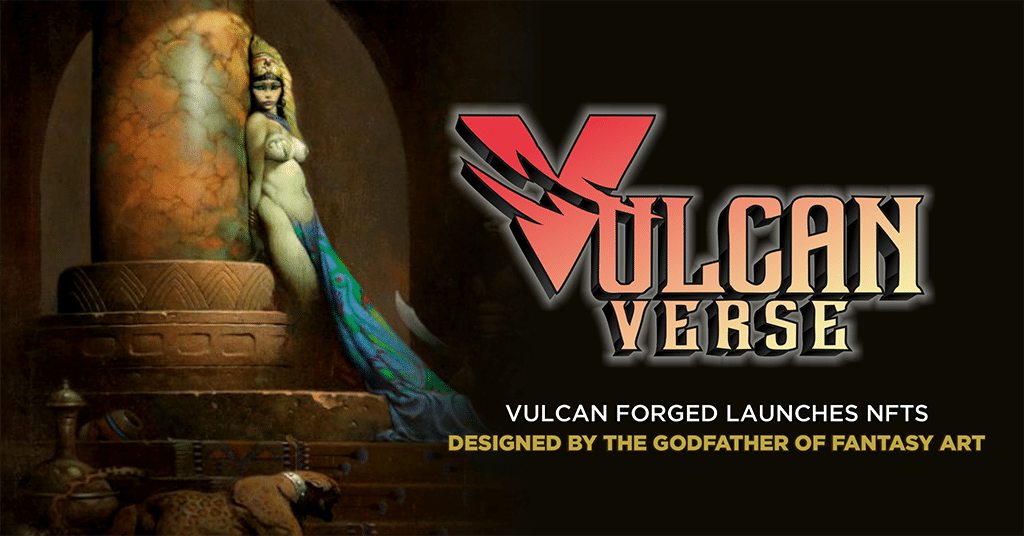 Blockchain gaming platform Vulcan Forged has secured the intellectual property (IP) rights for works included in the Frank Frazetta Art collection. The team plans to use these rights to create and distribute fantasy-themed non-fungible tokens (NFTs), brandishing the famous works, in Vulcan’s in-game world the VulcanVerse.

Amongst the famous artworks, Frank Frazetta’s “Egyptian Queen” – a painting that recently sold for $5.4 million – will be tokenized for the first time as an NFT-themed ‘Vulcanite’ – a champion in the in-game world. Some of the original licensed artworks have already sold for millions of dollars globally. Most notably, the Vulcan team has secured the rights to designs by the so-called “Godfather of Fantasy Art”, Frank Frazetta. Frazetta is a world-renowned fantasy and science fiction artist most famous for his Conan The Barbarian illustrations. He has gone on to become an icon and inspiration for the current generation of fantasy artists.

How will Vulcan Forged Use the IPs?

The Vulcan team has confirmed that many of the NFTs set to be launched in the VulcanVerse will be minted for the first time on the platform’s native blockchain as Vulcanites. Besides the digital ownership of the actual artwork, Vulcan Forged users will be able to use the tokens as champions inside VulcanVerse, the flagship MMORPG, and other games in the ecosystem.

The current IP licenses will also allow VulcanVerse to use the characters in the five upcoming gamebooks, contributing substantially to the profound lore that permeates the whole ecosystem.

Vulcan’s gaming ecosystem has been making headlines as a result of its fast pace of development and its ever-growing gamer community. Incarnate – a 3D Board game with 8,000 champions – is one of the many upcoming games to join the Vulcan Forged ecosystem. It will also offer marketing, technical support, and $40,000 in development grants for blockchain games and dapps on the vulcan platform.

Moreover, most recently, a fantasy trading card game called Berserk launched in the VulcanVerse. Players can simulate battles based on the ‘creatures’ associated with each Berserk playing card, as well as exchange playing cards in the vulcan ecosystem. The launch is set to include a tournament with $100,000 in rewards for the victors.

Vulcan users will soon be able to claim a portion of the previously announced $20 million reward pool by playing games in the ecosystem or staking the platform’s native token, PYR. Indeed, PYR was recently listed on centralized cryptocurrency exchange KuCoin, its first appearance in the open market. The listing is an effort to support PYR and the wider Vulcan Forged ecosystem, whose marketplace now has over $60 million in trading volume to date.

Finally, the team has introduced a fiat-crypto ramp to expand the payment options for new and existing users, and plan to launch 100 additional games in the VulcanVerse by the end of 2021. More recently, the Vulcan Forged team announced the platform will support NFTs created on the Polygon network as a result of their latest partnership with Network Arkane.

VulcanVerse is a virtual world set in the Greco-Roman era. It is a stand-alone game that uses blockchain technology to enable users to truly own their land and assets. Its detailed lore is written by the authors of Fighting Fantasy, a series of successful single-player role-playing gamebooks created by Steve Jackson and Ian Livingstone. Additionally, the virtual world boasts complex gaming tools and multiplayer game-playing functionalities.

VulcanVerse is blockchain-based, with key items in the virtual world existing as NFTs on a purpose-built blockchain. Vulcan’s Berserk can be accessed via a downloadable application that recently became available on Google’s Play Store.

Disclaimer: VULCANFORGED is the source of this content. This Press Release is for informational purposes only. The information does not constitute investment advice or an offer to invest.