The cross staking technology removes the issue of what to do with Proof-of-Work platforms that have no wish or opportunity to restructure their blockchains for the Proof-of-Stake consensus mechanism.

Many still consider it a dream that the staking can be as profitable and fast as mining while maintaining its convenience for any user and “green” protocol. But such dreams have already become for those who gave it a try and received their rewards the reality – the name of it is cross staking or, to be more precise, the cross staking. It is a unique layer-two framework that was developed by Matrix Network that removes any boundaries between blockchains, opening the opportunities to stake any existing cryptocurrency. So, with its help the impossible was made, giving the user in return better results than from the ordinary staking and safer conditions of work than mining can ever offer. Two providers are already working with this technology: Oreol Staking and Prime Stake.

How Exactly the Technology of Cross Staking Works

As it was already mentioned, the mechanics of cross-chain staking are based on creating the additional layer of blocks over the existing blockchain, the structure or consensus mechanism does not matter much. Then the assets of the main chain get frozen, launching the process in the sidechain created instead, where the funds start to stake as in a classical Proof-of-Stake network. Such a mechanism of work gives the solution to several important issues that staking has yet to resolve.

What Problems Can Be Solved through Appliance of Cross Staking

First of all, the cross staking technology removes the issue of what to do with Proof-of-Work platforms that have no wish or opportunity to restructure their blockchains for the Proof-of-Stake consensus mechanism. As the example of the Ethereum network illustrates, it takes no less than five years to transform the blocks into another type – not everyone can spend that much time, effort, or resources. Secondly, with cross staking the security of assets will not become a problem, because the second layer also means an additional step of fund protection.

Any fraudulent that wished to get to the staking tokens would meet the necessity to hack both the main and side chains in order to get what they need. And, of course, the question of data processing will be resolved – as there is no additional encoding applied, the information flow is not decelerated, therefore increasing the speed of staking. As the result, many owners have immediately seen the results of their investments through the daily reports with multiplied rewards without the expenses of mining or delays from classical staking. 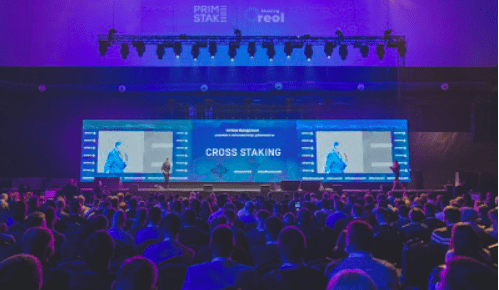 How the Situation Changes with the Cross Staking Emergence

With the general staking principle, “the more, the merrier” the cross staking participants who invest their funds can get a tripled amount of assets than expected from staking. There were even the cases with the certain cryptocurrency types when the reward has exceeded the ten times the basic notions. When more users join the network, the staking benefits will only grow bigger. The attraction of new users can also help the active referral programs offered by providers. So, what are you waiting for? Such services are already supported by the staking providers, the lists of which are frequently replenished on the official website https://cross-staking.network.

If you are ready to try the technology and stake your crypto with huge profits right now, then go to the website of one of the 2 verified cross staking providers Prime Stake or Oreol Staking.

Investment and philanthropy platform WAHED has donated 5 million of its utility token WAHED Coin to Fondazione Europea Alessandro Cenci (FEAC) at a private event in Rome.

The world of blockchain technology is ever-changing, and with the introduction of Snowfall Protocol’s (SNW) $3 Million phase 2 presale, it is changing yet again.