Daniel M. Harrison explains how the Blockchain became the value configuration for a decentralised economy where cooperation is the core advantage.

Everyone understands that the Blockchain is a technology that can do things other ledger-based technologies can’t. But what’s less clear is how it also serves as a value configuration for a decentralised economy called the Internet of Things, where cooperation – rather than outright competition – is the name of the game. What does that mean?

Understanding what is meant by this statement is fundamentally important for the purpose of understanding the revolutionary permanence of the role of the Blockchain in economics in the context of the digital world. So here I will try and explain.

Most of us are familiar with value chains. They are the first businesses we usually (at least, used to) attempt ourselves – the very simplest form of commerce. We buy ingredients for $20, we buy cups for $5, and we sell lemonade for 25 cents each; as long as we have sold over 100 cups of lemonade by the end of the day, we have made a profit. That’s a value chain – in other words, a factory, a retailer, or any sort of product assembly and/or sales outfit. 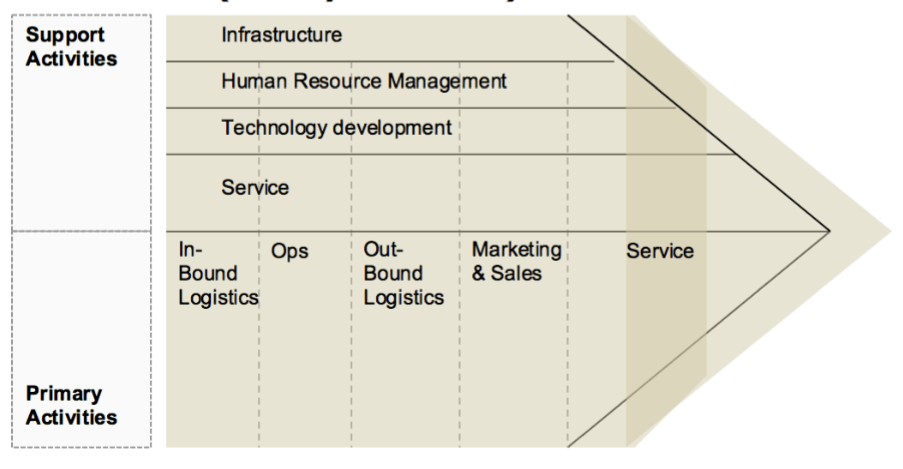 This is how Michael Porter chose to illustrate the value chain in the 1985 bestseller Competitive Advantage.  In the book, Porter summed up his position with respect to competition thus: “Competitive advantage grows fundamentally out of value a firm is able to create for its buyers that exceeds the firm’s cost of creating it.” Here we see then the classic law of capitalism in action: buy low, sell high. That’s the most important thing to bear in mind about value chain economics: only by buying lower than you sell for (factoring in your cost of manufacturing and logistics as he has determined within the model above) will you be successful. The things that enable a company to do that are what Porter terms its “competitive advantage” (today a very common term, but back in the 80’s, an entirely new one).

About a decade and a half later, two academics in Norway, Charles Stabell and Oeystein Fjelstad hypothesised that Porter’s value chain economics was, while broadly correct, incomplete. Not every firm creates a superior competitive value proposition to its rivals by buying low and selling high, after all; consulting firms or law firms sell knowledge, and they may have to pay extremely high for that knowledge in the form of personnel, after all. This sort of knowledge-side sales organisation both the academics termed a “value shop”. It looks like this: 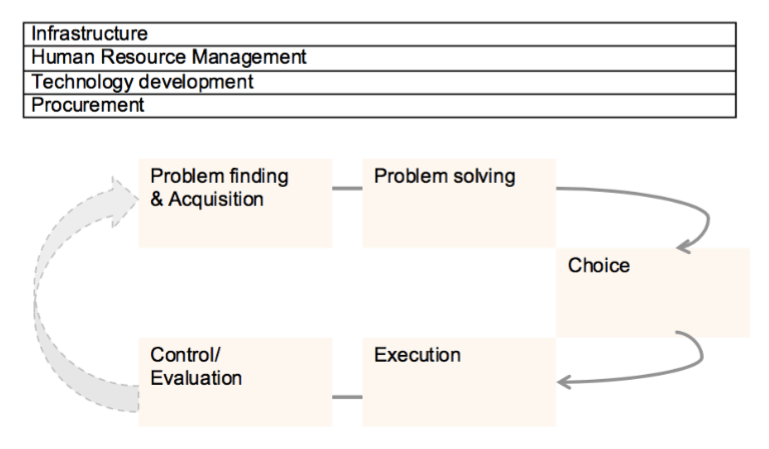 What the academics did in creating this model was to keep the broad organisational underlying aspect of Porter’s value configuration in tact (i.e. Infrastructure, HR, Tech Development), and then commingle this stack with an acquisition-based component vs. a supply-side component (Procurement vs. Service). This led to the constant pursuit of the acquisition of knowledge at the top layer, which replaces the requirement for constant bargain-hunting a la the supply chain. Finally, instead of the value chain’s process-driven  approach to value realisation, the academics plotted a more event-driven approach underneath the core tasks, one which started by finding a problem, graduated to working out a number of possibilities that could solve the problem and ended up with solving the problem (at which point it cycles back to finding another problem again).

There was one other type of value configuration the academics identified at the time, and this was very new for the late 1990s – this is a Value Network. A Value Network is an organisation whose value contributions stem not from its own internal process of hiring, manufacturing, realising etc. value components, but rather from the combination of the platform it offers to a bunch of external users and specifically, the contribution those external users make to the platform and vice-versa. In other words, its a firm like Facebook or Skype (or if you like, the Internet as a whole): 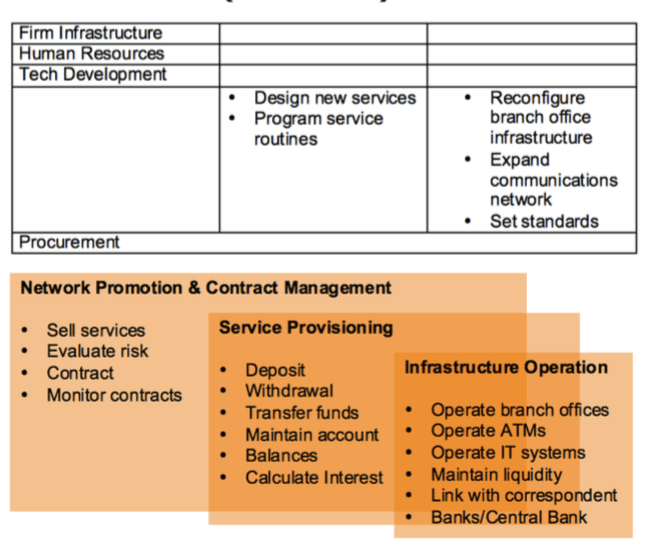 Naturally, there not being many internet companies around with huge scale operations at the time, the academics were forced to pick a more traditional model business to display their Value Network concept, and so they chose a retail bank, which is what you see above.

The important thing to grasp about a value network is that the value components are structured into 3 separate panels, all of which slightly overlap on top of one another as they are performed. The first of these panels is the infrastructural build-out – what we might term development in tech circles; the second of these panels has to do with Beta testing of the product and basic maintenance of the network itself; the third is all about ways in which the network is promoted to a core supply of adopters and how contracts are faithfully upheld once those adopters sign up as customers.

The Blockchain Is A New Value Configuration

My discovery some years ago was to notice that these value configurations were all very well for a centralised process of creating value, but they didn’t work so perfectly when applied to a decentralised value production process. When I thought a little more deeply about it, I realised that value decentralisation is not the same thing as value fragmentation but rather the opposite; by decentralising value you consolidate its core components into a very tightly-knit new form of value configuration. That’s what we call the Blockchain (specifically, Bitcoin’s Blockchain): 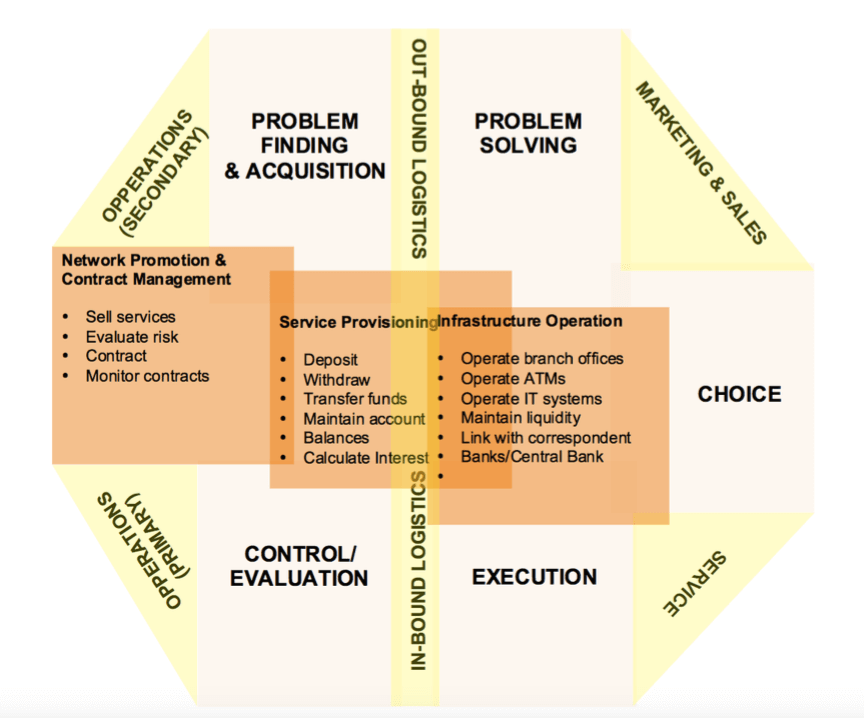 The Blockchain, in other words, brought together under one consolidated roof the various process of value creation that up until that point had existed apart from one another. This makes intuitive sense, for before the Blockchain was invented, we lived in a world that essentially had three separate sets of value creators all trying to in some way encompass one another’s  value configurative process into their own models so that there was an aspect of cooperation between competitive positioning. With the Blockchain, none of that was necessary.

In the example of the coin-shaped value configuration above, note specifically the following: the value shop processes of problem finding, problem solving etc. are the processes that are automatically performed by the Blockchain itself when it creates a Bitcoin. To create a unit of virtual currency, a Blockchain resolves a complex mathematical problem – this is typical consulting-style economics. The miner is obviously the most value chain-style actor in this economic paradigm, and his role is broken up and fragmented around the value model here in the yellow glue that keeps the network bound together with the Blockchain technology itself.

What About Ethereum’s Blockchain

From a value standpoint, the innovation of the Blockchain was an extraordinary revolution then: for the first time in history, value creation was automated under one single model.

It wasn’t long before someone called Vitalik Buterin however decided to reapply this concept to a more practical, multivaried user experience. As he told me back in 2014, “Bitcoin’s Blockchain can be used to store data or send data … going forward there’s a couple more things that a Blockchain could be enabled to do.”

Specifically, a Blockchain could itself become a “smart” configuration agent of value, Buterin noticed, employing escrow-style services for the users on its platform, allowing much more flexibility in terms of operability and marketing outreach, which would in turn fortify the value network running at its core: 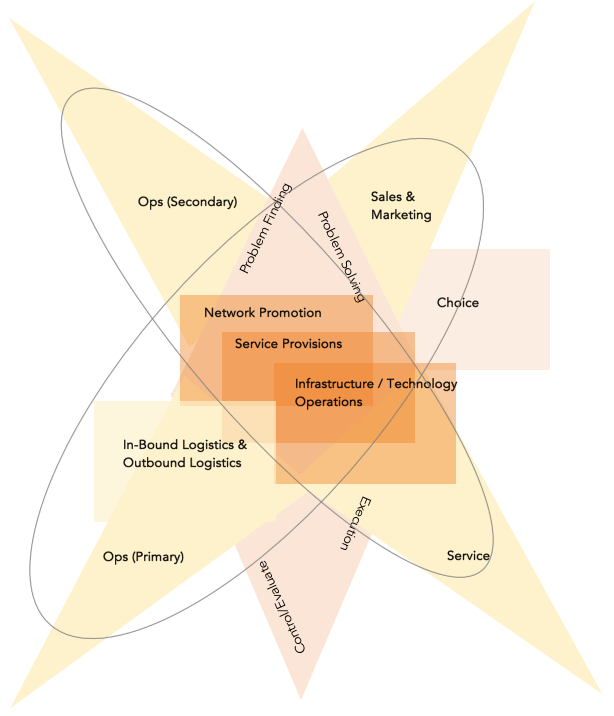 And so ultimately, here you have it: the most advanced Blockchain around today. What is striking from a value creation context is how specifically Ethereum’s Blockchain “unpackages” the value chain aspect of the configuration model (thereby unleashing the technology on markets wherein there are huge competitive  drivers for performance), specifically by repositioning the Blockchain on a vertical / diagonal axis vs. the horizontal axis it sits on in the case of Bitcoin’s Blockchain, while at the same time, maintaining the core network in tact at the centre.

A lot of what people mean when they refer to “complexity” with respect to Ethereum‘s Blockchain has to do with this one factor: how do you keep a network so tightly-knit and fully-functioning while simultaneously allowing the other value configurative aspects of the Blockchain to shoot out in all directions from that network?

If you look at all the other value configurations again, you’ll notice that value is always compact/centrally-reoccurring; it is never driven outwards in this way while functionally-speaking remaining circular at the centre. And that is the reason Ethereum’s value is  so high; simply, there is nothing else in the world that can produce value on an equivalent basis right now.

From Competition to Cooperation

Let’s stand back and look at the evolution of these stages in value configuration:

By looking at the paradigm in this particular way, it’s possible to easily identify the core trajectory, which is to say one where markets are competitively-driven to one where markets are today becoming more cooperatively-driven.  The radical nature of this change is not to be underestimated – it promises to change everything, from the way we price goods to the way we practice trading and even, the way we think about living, too.

Binance US may have established itself as an industry leader when it comes to low fees in crypto.