Anthony Pompliano estimates that BTC will reach $100,000 by the end of 2021, highlighting the unpredictability of Bitcoin.

Anthony Pompliano, a Bitcoin bull enthusiast, says that the hysteria surrounding the price of the BTC will probably increase more and more until there is “real blood on the streets”.

In a new note to investors, Pompliano points out that Bitcoin has always forced weak hands to surrender, through extremely volatile cycles of new and arbitrary highs and lows.

When Bitcoin reaches extended periods in an accumulation phase, it has always been caused by violent epidemics that have left investors panting longer for them to accumulate.

Pompliano, the co-founder of cryptocurrency investment firm Morgan Creek Digital, estimates that BTC will reach $100,000 by the end of 2021, highlighting the unpredictability of the Bitcoin brand and the extreme risk inherent in trading cryptographic assets.

In the long run, Pompliano says the most important factor in Bitcoin’s ability to continue to produce new blocks and move value 24 hours a day, 7 days a week, 365 days a year, without fail, whatever the current level of fear and repugnance in the price of the BTC.

Regardless of your risk appetite or strategy of your portfolio, be sure to stay alert.

The ability to ignore human emotions is a skill sought by all investors. But this does not apply only to euphoric states. This also applies to fear and fatigue. Bitcoin never sleeps. And you should not either. 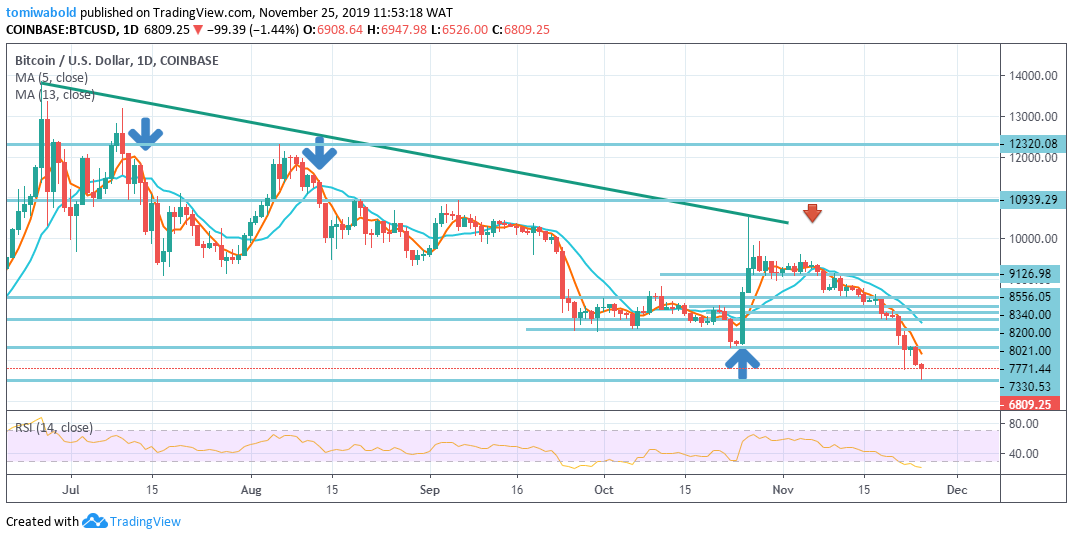 The bears were in control of the situation today, bringing down the market earlier in the session. Despite breaking below Sundays’ low on the 6865.00 level, BTC confirmed its breakthrough today at its lowest level of the prior session, after reaching a level of 6526.00 under its intraday.

The Bitcoin price on the Coinbase exchange is trading down at the time of composition at 6745.02. The lowest of the day reached $6526.00. The maximum reached is at the price level of $6947.98 currently.

Technically, looking at the daily chart, the digital currency has been trying to get closer to its horizontal support zone in today’s trading but has stagnated at this level at 6530.00. Since the price began to fall below the $8021 level, and then beneath the level lower than $7771, selling accelerated and stopped only after reaching its lowest level of the session (currently at $6526.00).

The outlook remains bearish, with an intact downtrend in the short, medium and long term.