If you’ve been tricked by fake celebrity-endorsed websites, then you are not alone. Daniel Craig is constantly being used by scammers to lure people into various get-rich-schemes, and this time its for a scheme named “Bitcoin Era”! Bitcoin is an emerging cryptocurrency that was founded in 2009 and has attracted a lot of investors due to it decentralized nature. However, it is unregulated by many financial institutions and that allows scammers to take advantage of unsuspecting investors. Bitcoin scammers use social media platforms to propel their ads by using fake celebrity endorsement which have proven to be extremely effective at swindling innocent victims. 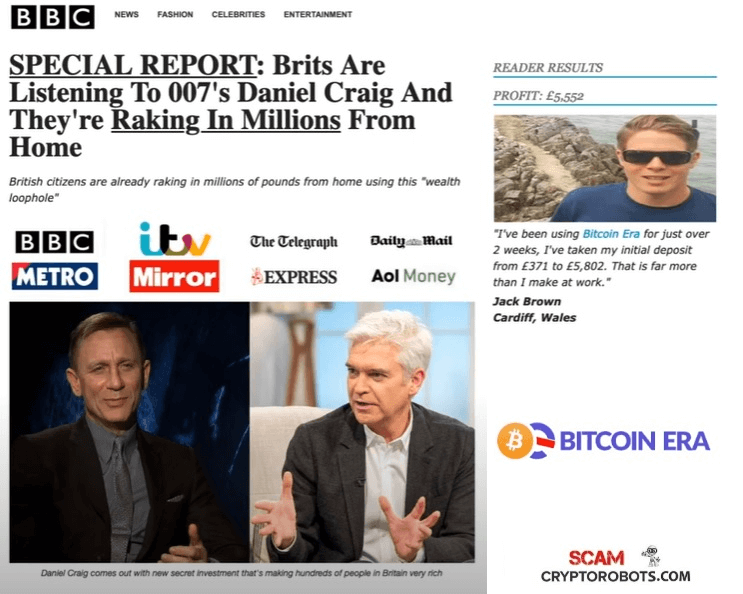 Why Do Scammers Keep Using Celebrities Like Daniel Craig?

Daniel Craig (Mr. 007 in the flesh) is very well known widely recognized by millions of people across the UK after starring in a variety of roles. The movies he appeared in and his profession have earned him recognition among millions of UK viewers and listeners. Bitcoin scammers used that recognition he gained and spent fortunes on fakes ad promotions. Unsuspecting people were not hesitant to invest in this latest get rich quick scheme because they trusted Craig and the crime-busting image he resonates with viewers. Craig’s privacy and reputation are equally important to him, that is why when by Bitcoin scammers to steal money from using his name it makes him furious.

Other Celebrities Are Also Used For The Same Purposes!

Celebrities and high-profile public figures such as members of the Dragon’s Den, Piers Morgan, James McAvoy, Elon Musk, Richard Branson, and Martin Lewis are used excessively by Bitcoin scammers for promotional purposes for the same reasons stated above.

Other Types of Bitcoin Scams

The following represents a selection of various types of Bitcoin schemes which are used to scam victims out of their hard-earned money (partial list):

How to Avoid a Bitcoin Scam

Scams like Bitcoin Era are running rampant and seem to be particularly effective during troubling economic times (i.e the coronavirus pandemic). According to reports from National Crime Agency, the UK financial fraud figure stands at about £190 billion in losses every year. What this means is that financial fraud is constantly on the rise, and it does not look like it will stop anytime soon. If you want to avoid being a victim of a scam you should consider the following: