The grant aims to support research that will hopefully make the applications of Dusk Network more mainstream.

Dusk Network held the maiden edition of its official conference dubbed DuskCon on April 9, 2021. The conference was aimed at celebrating the End-2-End release candidate which had been in the world for 3 years. It was also about connecting with its existing audience, bringing users up to speed with its current technology use, and setting the pathway for future endeavors. The conference also hosted notable speakers like Emanuel Francoini of Dusk Network, who spoke about DeFi and E2E Release Candidate, Luke Pearson of Dusk Network, Marco Robustelli of Ankr, and Sahil Dewan from Harmony.

There was also the notable announcement of Dusk Network’s new grant program to benefit the greater blockchain community by attracting world-class talent and expertise. 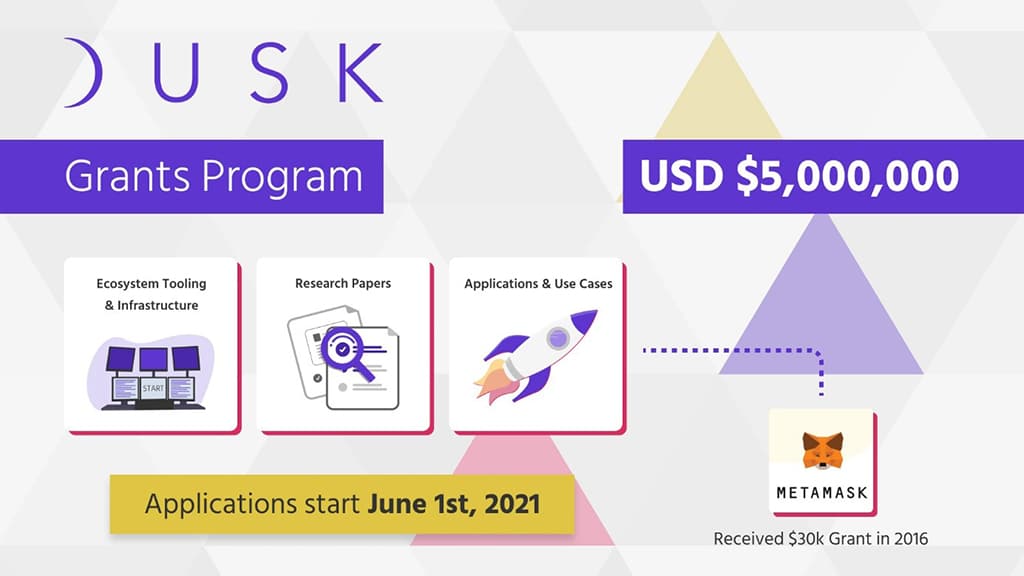 More details have been made public regarding the new grant. For starters, the grant is to the tune of $5,000,000. Dusk Network’s major focus is on privacy technology and this grant will be given to promising projects within that space to not only benefit researchers but to strengthen Dusk Network’s position in the space.

This grant is also a history-making one as Dusk Network has become the first blockchain firm in the Netherlands to issue a grant of this size. This decision was partly inspired by other success stories in the industry that were made possible as a result of grants. One example is Metamask, which began with a $30,000 grant but now brings in millions in revenue.

Dusk Network already has great plans for the grant and for what it can do for its community. According to the official announcement, it will fund up to 35,000 hours of labor for Dusk Network 100 smaller initiatives, or up to 20 larger projects. It will also be used to encourage developers to create initiatives that benefit the financial landscape.

More details regarding the grant, including the application process, are expected to be made public in due time. According to Pascal Putman, the Commercial Director of Dusk Network, current grants for blockchain initiatives tend to shut out smaller but promising projects and the grant aims to combat this.

“Over the past years, we discovered that it can be quite challenging to apply for a grant as an individual. National and European funds are looking for large-scale consortiums, whilst there is much more talent needed for technology companies to grow themselves. With our grants program we are contributing towards an innovative future in FinTech and COVID recovery,” he said.

This inaugural conference celebrates 3 years of Dusk Network’s existence and also sets the stage for future growth, with more conferences hopefully to come.

“Conferences like DuskCon keep you engaged with all parties interested, especially our loyal community, in what you are creating. It is a team effort, a great opportunity for acquaintances and you have to connect all the dots in such a way, everybody sees where you are coming from and where you are going. The first DuskCon already requires a follow up, though we hope to make it a live event next time with some of the same intimate feel,” said Emanuele Francioni of Dusk Network.

Press Release Should You Be Adding Uniglo (GLO), Bitcoin Cash (BCH) and Harmony (ONE) to Your Portfolio?
By Kseniia Klichova August 15th, 2022

Are you looking to make some changes to your portfolio? Now could be the right time to do it.

In the proposal posted via the protocol’s community page, Harmony developers revealed that over 14 different asset classes worth close to $100 million were stolen from 65,000 wallets.