As LiquidApps has revealed, the DAPP Network has just experienced a new upgrade which is said to bring a wide range of new features and fixes.

The DAPP Network, born out of frustration at the rising cost of vRAM for EOS’ virtual hard drive, has just had a major upgrade. Developer LiquidApps has announced the release of DSP 2.0, bringing with it a wide range of new features and fixes. Combined, these improvements make the emergent EOS scaling solution a force to be reckoned with, and pave the way for a flurry of new decentralized applications that can operate at scale.

The DAPP Network is not a sidechain for EOS – LiquidApps call it a trustless service layer. In layman’s terms, though, it works in a similar manner to a sidechain such as Tron’s Sun Network, easing the strain on the mainchain. While EOS can support a high volume of transactions and daily active users, its dApp developers cannot. Like any blockchain, there is a market for resources, which are at a premium, and when demand rises – such as when a dApp becomes wildly popular – so does the cost of provisioning virtual storage (vRAM) to all those users. In the DAPP Network, LiquidApps has hit upon a simple yet effective solution to that problem: outsource the responsibility for storage to a series of Dapp Service Providers, who can provision vRAM multiples cheaper than its on-chain equivalent, without materially compromising on decentralization. 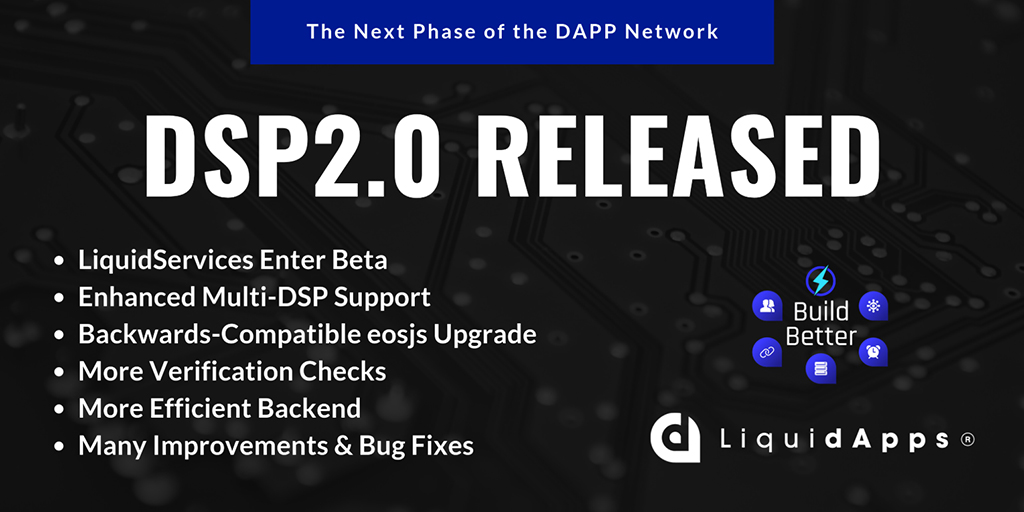 DSP 2.0 Piles on the Powerful Features

There’s a lot that comes boxed with DSP 2.0, much of which is still in beta, such as LiquidAccounts, an account creation and key management tool that will make it much easier for developers to onboard new users. LiquidOracles, a decentralized solution to the eternal oracle problem, is also sure to be warmly received by EOS developers. Suddenly the DAPP Network is starting to look less like a source of cheap RAM and more like an all-in-one smart contracting blockchain in its own right. That’s not to say that LiquidApps are looking to usurp EOS in any shape or form – they’re a complement rather than a competitor. Nevertheless, for those immersed in the smart contracting trenches, it’s been fascinating to watch the rapid evolution of the DAPP Network, which was birthed with little fanfare and is now on the verge of achieving great things.

There are a few hurdles to cross and checklists to be filled out before DSP 2.0 can be given a clean bill of health, it should be noted: LiquidApps recommends that all DSPs (node operators and resource providers on the DAPP Network) use the Kylin testnet for a week before upgrading to the mainnet.

Other Goodies to Pick Through

There’s a lot to sift through with the release of DSP 2.0, and it will likely be several weeks before the DAPP Network’s biggest upgrade yet can be fully assessed. The introduction of a client library is sure to be appreciated by dev teams, while third party staking of DAPP tokens is also worth a mention. Now token-holders can stake DAPP while allocating services to their favorite development teams, providing added utility to the network’s native token, and further piquing community interest in the ongoing DAPP auction, which is mimicking the year-long sale format of its parent network EOS.

As LiquidApps conclude in their DSP 2.0 announcement, “this latest release puts more power in the hands of DSPs, allowing them to expand their offerings with bigger and better services. The DAPP Network is becoming more flexible and more powerful, and developers can build custom services and Zeus SDK extensions to add additional capabilities.” LiquidApps have done their bit. Now it’s over to the third party devs to see what they can come up with, unencumbered by the threat of rising resource costs. If they can dream it, the new and improved DAPP Network can scale it.

Some skeptics argue that until more countries are on board, crypto development remains choked by global regulators.

Sun revealed that while he had won the bid half a year ago, he hadn’t been able to attend the launch of the mission.

TRON founder Justin Sun says he is going into retirement from the blockchain/crypto platform he founded, to take on a new project.