The Hats Token, which is the protocol’s governance token, will be sold across different decentralized exchanges and can also be staked in staking pools.

Investors consider the emergence of decentralized finance as an end to the legacy system. However, as they journey through space, they are faced with a monstrous challenge- security, which the legacy system seems to have a prominent control on, given that it is monitored by central bodies. DeFi is largely unregulated, as such investors have to decide on which is best guided by the pros and cons of both sectors. With the decentralized space maturing, several platforms are thriving towards bringing in secure solutions to fuel the adoption metrics.

Hats Protocol is willing to make decentralized finance a complete package for investors, strengthening the trust they repose in DeFi protocols. Using a cybersecurity network with off-chain and on-chain capabilities, vulnerabilities leading to exploits can certainly be a thing of the past.

Hats is a decentralized cybersecurity network that features a community of hackers, project core developers and token holders who also act as stakeholders and ensure the paramount security of the Hats.finance protocol. This will be done through governance and an incentive initiative that is directed at rewarding community members who discover and disclose vulnerabilities and possible exploits.

Hats’ incentive program consists of a bug bounty program by which members of the Hats community are rewarded for their vigilance. There are vaults containing different sums which are determined by the projects handling the vaults. The first vault contains a sum of $100,000 in stablecoin, USDC. This amount will be rewarded to any hacker or hackers in the community that are able to detect any vulnerability on the protocol. 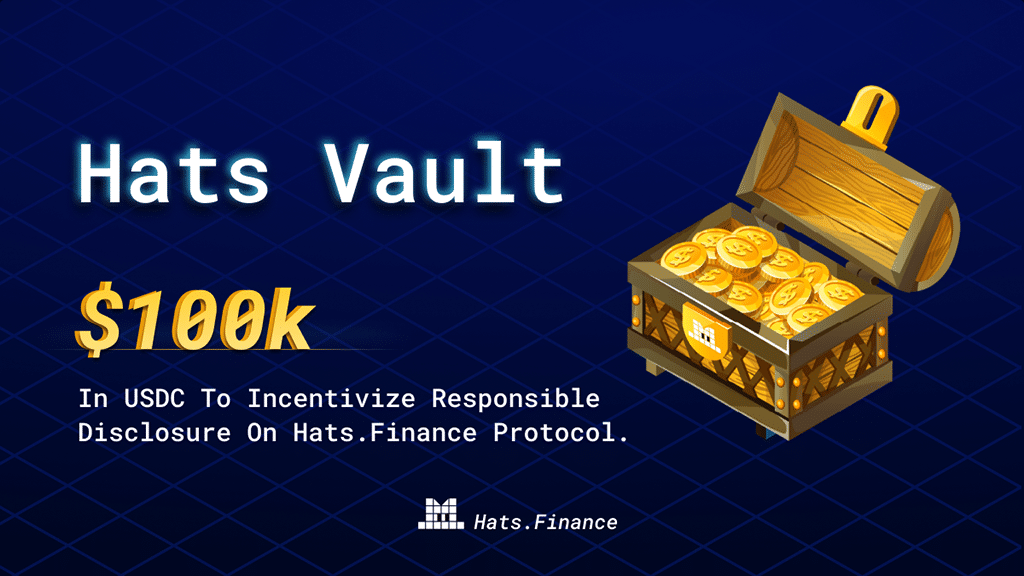 To gain access to the locked-in amount, an on-chain proof of the vulnerability discovered will be presented to the project’s committee who will either approve or deny the vulnerability. If approved, the funds are released to the hacker. This becomes a highlighting factor for both parties- the project’s security is preserved to ensure that hackers outside Hats community do not capitalize on bugs to wreak inestimable havoc; while the hacker gets a reward for being diligent and circumspect.

In the last two years, a number of defi protocols have been victims of well-coordinated attacks which were followed by the loss of millions of dollars. The last attack on the defi protocol, Poly Network saw a black hat hacker almost walk away with $600 million in different cryptocurrencies such as ETH, USDT and many others. But for the combined efforts of industry experts, the hacker would have walked away with the stolen funds.

Poly Network also took extra efforts to make the anonymous hacker return the remaining funds by offering him a $500k bounty and a job as a Chief Security Advisor of the protocol.

Hats is adopting a similar but proactive measure that will detect exploits even before bad actors in the DeFi space discover them.

Each disclosure will be carried out through unique means comprising on-chain timestamp commitment and off-chain encrypted communication. As such, both the disclosure proof and the hacker’s identity are protected.

Hats protocol will turn black hat hackers to white hats with its bug bounty program. To push this narrative, Greenfield One and Lemniscal with participation of Spartan Capital, Accomplice, Collider Ventures, IOSG Ventures and others. Collider Labs provided initial capital and development support.

‘A core reason the founders created Hats was to lure black hat hackers to use their skills to secure crypto projects. In their words, “By incentivizing an open hacking market that scales with the growth of the project’s market cap and rewards hackers – we will turn black and gray hat hackers into white hat hackers”

Hats has also decided to partner with popular NFT artists – driving the demand for non-fungible tokens across the ecosystem- by rewarding vigilant hackers for their hard work and efforts with unique and high-profile digital collectibles.

The Hats Token, which is the protocol’s governance token, will be sold across different decentralized exchanges and can also be staked in staking pools.

Raghav Sawhney is the Founder of BlockchainPRBuzz, a crypto-consulting agency and BTCWires, Blockchain and Crypto News Aggregator. Raghav holds a Master’s degree in Marketing. Three years ago, he shifted her focus from the traditional marketing industry to blockchain to help to develop startups.

Greetings Credefians! We are excited to share with you that our Testnet platform is live and doing great. We are thankful for your participation and impatiently looking forward to receiving feedback on your platform experience. Remember, our Mainnet Launch at the end of January is approaching!  As you already know, Credefi opens the doors for […]

The Ravendex team is excited to announce ‘a 10,000 Unique Pixelated NFT collection with proof of ownership stored on the Cardano Blockchain.’