Pundits like Mark Cuban claim that Bitcoin is in a bubble. But Daniel M. Harrison shows how fundamentally markets are altered by the Blockchain and Ethereum.

As Ethereum and Bitcoin hit new all-time highs this week, the pundits are out in force with proclamations of “digital currencies are in a bubble”: 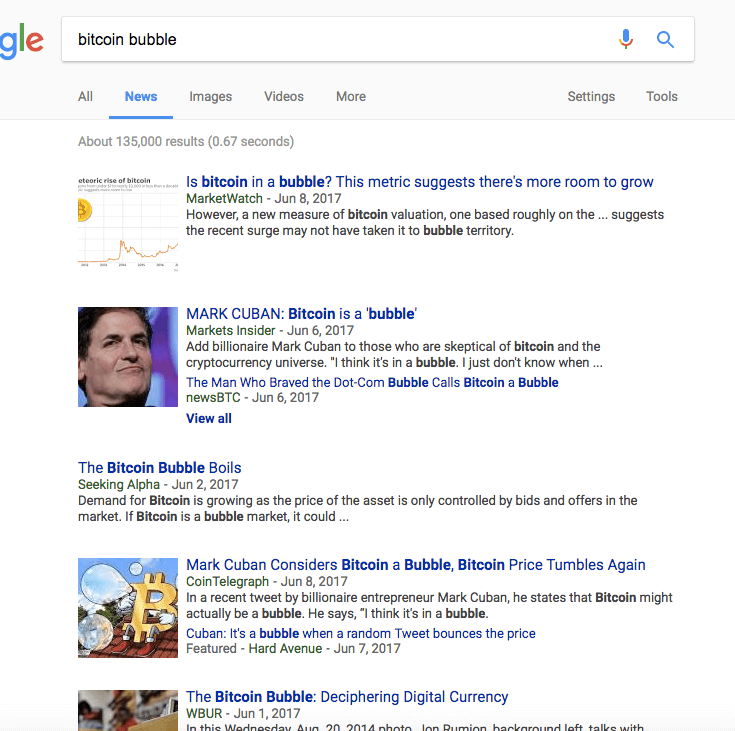 Mark Cuban, whose most notable quality is being smart enough to make a pile of cash for himself, but not quite bright enough to ever make anyone else any money, was the most recent notable talking head to mention the b-word:

“I think it’s in a bubble. I just don’t know when or how much it corrects. When everyone is bragging about how easy they are making $=bubble

The problem for Cuban and all the rest of the Wall Street guys is – well, they are wrong. Bitcoin, Ethereum and other digital assets are not in a bubble. Nor will they ever be in a bubble.

Yes, you heard that correctly. I am saying a bubble in digital asset valuations is completely practically impossible from any reasonable conceptual and logical – and especially, financial – standpoint. The reason? Market Bipolarity.

Market Bipolarity is something no one understands, but if you hold digital assets right now (and even if you don’t) you may as well get the hang of it, because its core tenants are vital to understanding how valuations in these assets are formed.

The concept of Bipolar, Cyclothymic and Cluster B Markets is in fact an especially essential one to understanding digital assets such as Ethereum, where smart contracts etc. are in use. It’s complicated but I’ll try to distil it easily here as I believe it is the essence of interpreting value in this market.

First of all, I want to make it very clear. Bipolar Markets is my own observation and theory based on:

1) the Theory of Reflexivity which belongs to George Soros;

2) my own observations of how different thinking participants act in capital market cycles;

Furthermore, I have personally used this theory to amass a colossal amount of wealth in a very, very short space of time over the past few years. I guarantee that before now you will never have heard the following before. I can only suggest that it may be worth trying to understand at least the jist of what follows (I am sympathetic to the fact it’s not easy stuff, however. You can just drop me an e-mail if you have further questions. I will try and answer within reasonable time,)

Some time ago George Soros noted that market conditions are not really “equilibrium” (i.e. they don’t usually “revert to the mean”) but rather they are “reflexive” (i.e. they reflect the views of their participants). This is because of two thinking functions being in synch: the cognitive function and the manipulative function.

The cognitive function is supposed to be a neutral thinking function, assessing facts for what they are; the manipulative one however seeks to turn the fact into an advantage. If the cognitive thinking function of the mind is influenced by the manipulative function of the mind then the mind assesses neutrally what is in fact manipulated fact. Thus markets often reflect the views of the participants, not of the reality of the underlying economics.

Now, onto my own observations. We can express the thinking of George Soros’s Theory of Reflexivity thus:

Some of you are probably wondering why we start with the manipulative thinking function in the equation. After all, are we not cognitive thinkers first?

There are two reasons I have presented the equation this way round. First, as Soros points out, most of the time markets reflect the opinions of the players, not the fundamentals. Second, if we started with the cognitive thinking  process then how would we establish the reflexive market condition? By adding in the manipulative function to the already cognitive function? Maybe – but the cognitive process is influenced by the manipulative process, remember. Further, it would make no sense to subtract out a meta-state of thinking that wasn’t already present in the equation; so if cognitive thinking was the only thinking present, we could not accurately represent it using the line (Cognitive – Manipulative) = Equilibrium; rather we would have to use the caption (Cognitive) = Equilibrium. But that is not at all what Equilibrium Value is. Equilibrium Value is a negative feedback loop; a feedback loop implies there are multiple variables.

Clearly, Soros is logically correct here in his assumption that despite the cognitive thinking function being the “neutral/natural” one, in reality our perceptions are mostly vastly distorted all the time by our state of mind and ambitions. (That’s especially true when it comes to making money, too.)

Specifically, what I realised some time ago is that in Ethereum or Blockchain markets in general, what is unusual is there is an artificial thinker involved as well as a natural thinker (human being).

In other words, the Blockchain is a basic form of AI since via performing its own calculation of equations (to make units such as Bitcoins for example) or enacting smart contracts, technology is suddenly thinking in an economic way (indeed this is the whole revolutionary aspect of the Blockchain).

So what happens when we annex markets wherein natural thinkers and artificial thinkers co-exist? Simply, we always get reflexivity (what Soros also terms “positive feedback loops” since the manipulative function is influencing the cognitive process of analysis in a positive way). We can express this thinking thus:

Double Positive Feedback Loop = Bipolar I which is defined by manic episodes that last at least 7 days, or by manic symptoms that are so severe that the person needs immediate hospital care.

False Positive Feedback Loop = Bipolar II which is defined by a pattern of depressive episodes and hypomanic episodes, but not the full-blown manic episodes described above

Cyclothymic and Cluster B Markets

There are two other types of bipolar related mind-states, and they are worth considering here for a second.

This can be represented thus:

and there is a fourth variation, what I term the Cluster B (narcissistic, histrionic, borderline etc.) market:

Recall that these seemingly impossible states of market activity are merely based upon the logical observations arrived at above; although the results look quite shocking, the fundamental process of arriving at these conclusions is not. In the case of Cyclothymic and Cluster B market conditions then, what is in effect taking place is that the natural cognitive process of establishing a negative feedback loop in assessing underlying value is always being bypassed as traditional assumptions of “intrinsic value” are not just undermined but declared logically (and therefore mathematically) false.

Thus, just as for Bipolar Markets, there can be no intrinsic value at all present: the concept is a logical fallacy. Notice what we are saying here: because of the ever-present artificial thinker (the Blockchain) whether via addition of the manipulative thinking function or the implied subtraction of the cognitive function the feedback loop is either always double positive or what we may call “false positive” (in the sense that the natural thinker’s cognitive–negative balance is subtracted by the addition of the Blockchain’s manipulative thinking status). In other words, in bipolar markets the natural state of thinking at rest is not cognitive but rather it is always inherently manipulative! The concept of Bipolarity and the conclusion that there is always reflexivity present is ground-breaking. Here Is What All This Means:

It seems in the case of digital assets that in place of equilibrium there may be some sort of “optimised cost”, which is best understood as the value at which each user on a network represents given the growth exponent of the network, but this is an entirely different thing to saying there is equilibrium present.

I am not of course suggesting that digital asset prices will never drop. Rather, what I am saying is that the innovation in and of itself has fundamentally radically altered the laws of economics, at least in its own sui-generic sense. Just as for a bipolar patient, we really don’t know what the consequences of introducing this concept to society and economy is, but they are certain to require a different mind-set and approach to normal markets.

The upshot is here that this is where guys like Cuban, while maybe savvy enough get in front of millions of people to talk their own book 90% of the time and make some quick cash in the process, are simply nowhere near intellectually capable enough of understanding, let alone assessing, price differentials and economic detail in markets radicalised by emerging technologies.

Daniel M. Harrison is Editor-in-chief of Coinspeaker and Chairman & CEO of global investment company DMH&CO.  He is also the author of The Millennial Reincarnations, a novel published in 2015.

Subscribe to our telegram channel. Join
Related Articles
Press Release More Than 2500 Ethereum (ETH) Worth $3M Has Been Burned, Gnox Token (GNOX) Burns Its Supply to Maximize Its Value Upon Launch
By Olena Sergeyeva June 23rd, 2022

Burning tokens is a key part of the crypto world, as an attempt to limit supply and solidify demand.

Sepolia was launched in October 2021 and was confirmed by Core Ethereum developer Tim Beiko that Ropsten would more likely phase out.