Justin Sun, the founder of TRON and CEO of BitTorrent, recently announced that the JUST NFT fund has officially launched the NFT for “The First Collections” including Picasso’s works. The ownership of the collections has been mapped to the TRON chain through the TRC-721 standard. It is permanently stored on the TRON public chain and BTFS (decentralized storage system), which marks the “first show” in history of Picasso’s works on the blockchain. 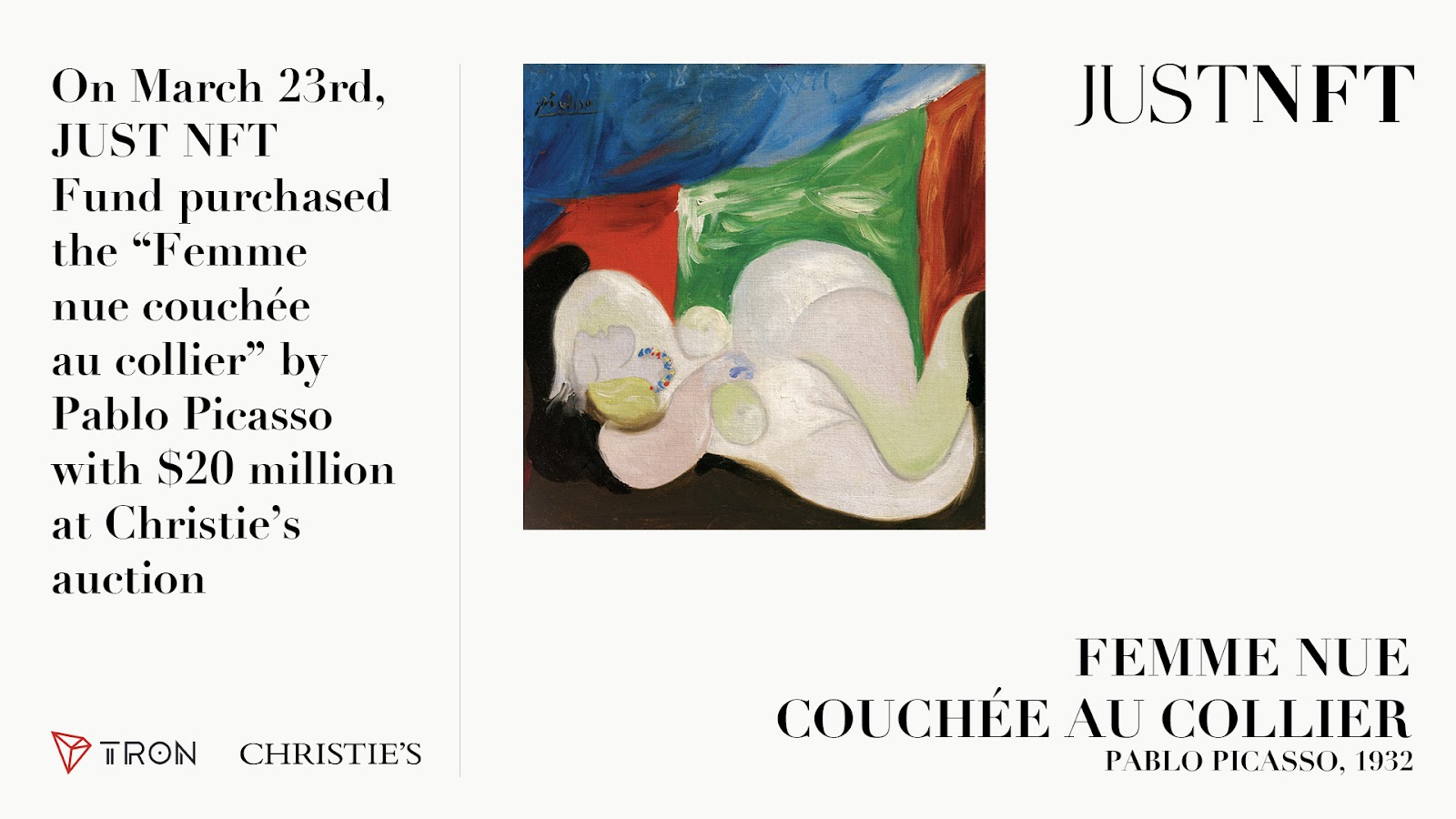 NFTs are a major innovation of blockchain technology in the field of art. By giving each work a unique digital signature, it can effectively ensure the uniqueness and circulation of the work. Through NFT technology, the digital format of any physical artwork can be uploaded to the BTFS system, and the corresponding NFT artwork’s BTFS address is generated. The information is then written into the smart contract according to the TRC-721 standard, and the uniqueness of the work is confirmed by the contract address. Take the NFT process of Picasso’s “Femme Nue Couchee Au Collier” as an example, the final contract address it generates is here, which validates its creation.

The NFTization of such important works of art is more likely to break through the technology circle and attract full attention in the fields of art, collection, investment, and finance, and then to business in these industries. At the inception of the JUST NFT Fund, Justin Sun told the media in a recent interview that “the mission of the JUST NFT Fund is the NFTization and blockchainization of the world’s top artworks, and to build a bridge between the  world’s top artists and blockchain.” Since its establishment, the fund has been adhering to Justin Sun’s consistent high-profile and quick-acting style, actively purchasing top artworks by leading artists in the global art market, and creating the first collections list within a few weeks. 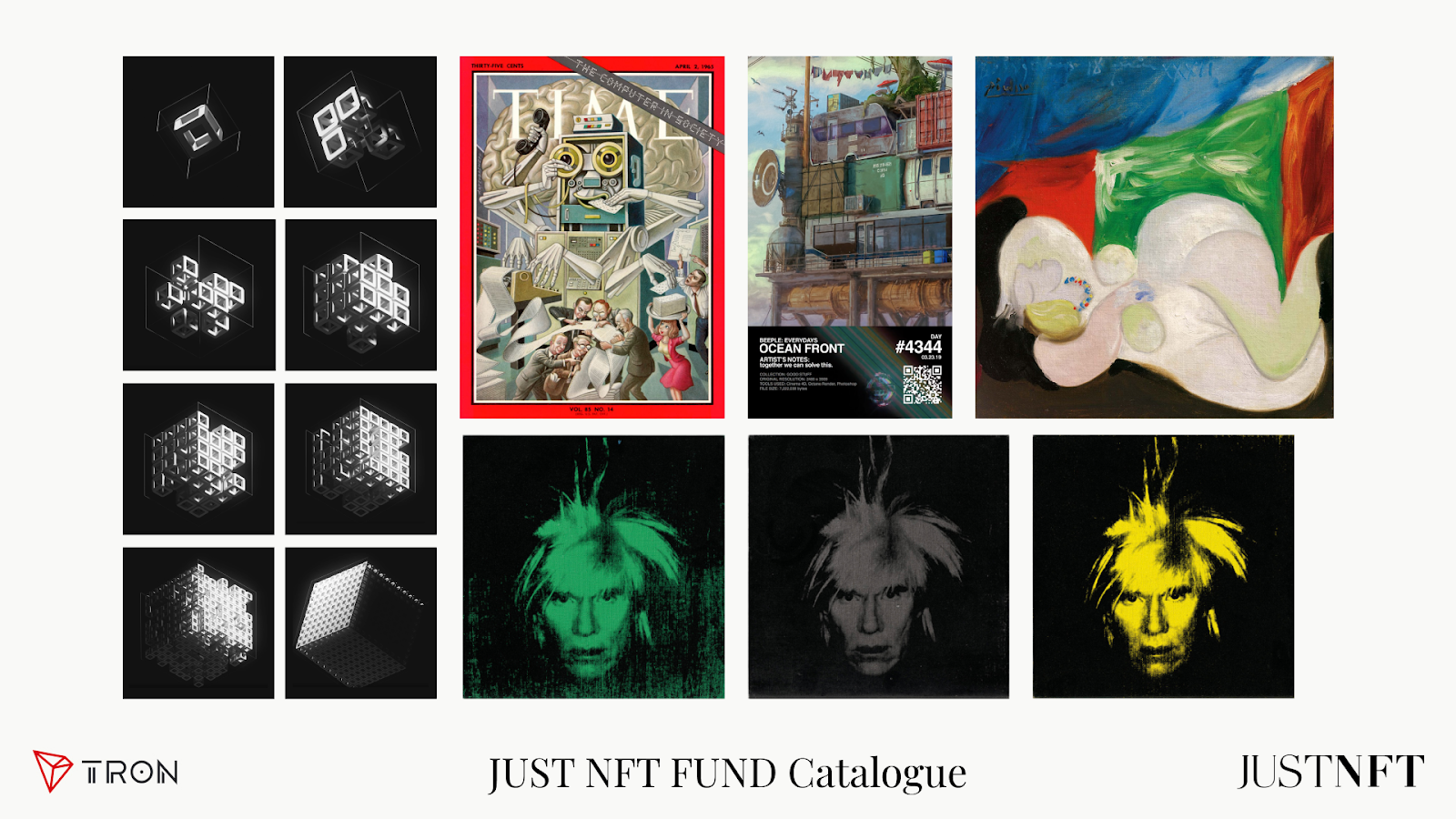 Justin Sun issued an open letter on the establishment of the JUST NFT Fund, saying:

“I firmly believe that in the next ten years, 50% of the world’s top 100 artists and artworks will be NFTized. The JUST NFT Fund will embrace and strengthen this trend.”

In the past few weeks, JUST NFT Fund has been advancing with leaps and bounds, which not only reflects Justin Sun’s unique strategic prowess, but also a powerful footnote to the overall positive market we are in. According to public data, the current total sales of the NFT market has reached $563 million, the transaction volume exceeds $5.5 million, and the total sales in February increased by nearly 8 times compared with January. As of April 25, a total of 196,000 pieces of encrypted art have been sold, and the total market value of NFTx art exceeds $549 million. 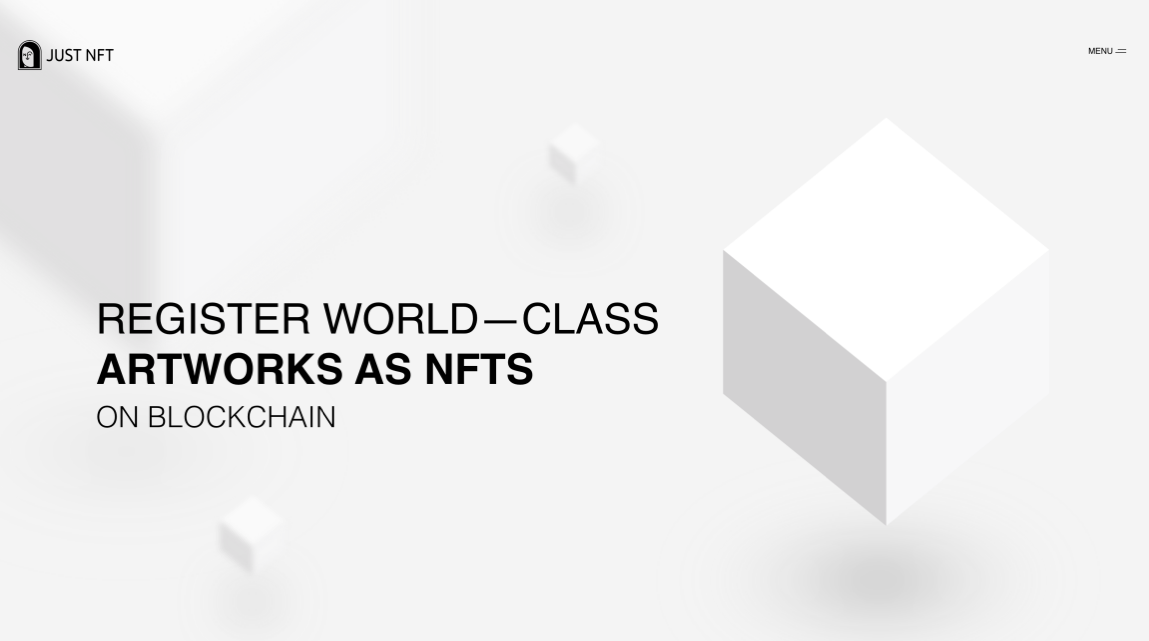 At present, other members of the JUST NFT fund team come from traditional art fields such as Christie’s and Sotheby’s, and are also active in the NFT industry. The fund is also inviting few of the world’s leading artists to join as art consultants. Justin Sun said: “JUST NFT Fund is committed to the NFTization and blockchainization of the world’s top artworks. Our vision is to become the ARK Ark Star Fund in the NFT field.”

It is reported that TRON will serve as the underlying support platform of the JUST NFT Fund, providing a complete solution for the NFTization of traditional artworks. As one of the world’s three major public chains, TRON currently has a total number of users exceeding 30 million, with more than 1.8 billion transactions, the world’s largest stablecoin circulation, and a rich and thriving blockchain business ecosystem.

TRON is dedicated to accelerating and the decentralization of the internet through blockchain technology and decentralized applications. Founded in September 2017 by Justin Sun, the company has delivered a series of achievements, including MainNet launch in May 2018, network independence in June 2018, and TRON’s Virtual Machine launch in August 2018. July 2018 also marked the acquisition of BitTorrent, a pioneer in decentralized services boasting approximately 100M monthly active users.