Rob Prior will create two art pieces live on camera and unveil his upcoming NFT drops. The first is a Marvel-inspired Deadpool rendition and the second is a Star Wars painting of Luke Skywalker.

The blockchain-based film financing platform Mogul Productions will host an NFT Livestream with Marvel and DC Comics artist Rob Prior on May 27 from 5 PM – 8 PM EST.

During the stream, celebrated leaders in the blockchain and film industries will discuss the sudden proliferation in the demand for NFTs. Some of the confirmed panelists include:

After the discussion, Prior will burn one of his original paintings inspired by The Wolf of Wall Street and unveil its digital version as an ERC1155 standard non-fungible token. Mogul Productions will then auction the NFT on its platform.

Lisa Sun, Founder and President of Mogul Productions, said that the NFT Livestream showcases the upward trajectory of NFTs as they disrupt the entertainment industry. She further added that she was excited about the fact that the Livestream will mark the first time ever that a globally recognized comic book and film artist – Rob Prior – will burn his artwork live on camera to create its NFT.

Prior will also create two more art pieces live on camera and unveil his upcoming NFT drops. The first is a Marvel-inspired Deadpool rendition and the second is a Star Wars painting of Luke Skywalker.

While the NFT Livestream: Proof of Origin event is free for all, viewers must first sign up through Eventbrite. 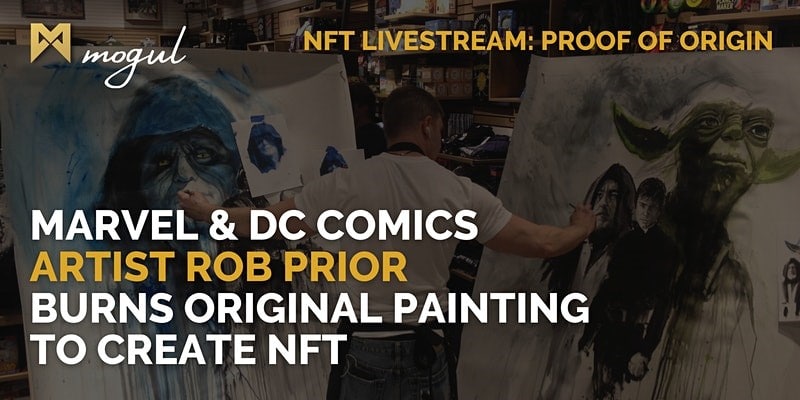 Users who minted #Players in early stages will receive more governance tokens during the games and will have more time to practice.

There are no clear details regarding when YouTube might add NFT features. However, the platform sees Web3 as “a source of inspiration” and considers DAOs as a great opportunity to grow the connection between creators and their fans.