Quantum Entanglement: Mysterious Blockchain Project From Darknet, Which Is About To Change The World Pattern

On January 3, 2009, Bitcoin was born out of nowhere, which did not receive widespread attention. On May 22, 2010, a programmer named Laszlo Hanyecz bought two pizzas for 10000 BTCs. It can be seen that the value of Bitcoin was not recognized until it met the darknet. The mysterious dark web, like the iceberg hidden in the sea, is defined as the web that general search engines can’t search on the technical level; on the social level, it has many unimaginable horror, terror and crime.

But it’s undeniable that today’s haloed Bitcoin, the initial application scenario starts from this not so beautiful place. In this hidden world, Bitcoin, which uses encryption technology, meets the demand of anonymity in the dark network, which coincides with each other. When Bitcoin plummeted, it was the darknet that propped up the crumbling price. After Bitcoin, darknet made cryptocurrencies such as Monroe coin and Litecoin. Recently, can quantum entanglement, the world-class mystery project first revealed on the darknet, become the next miracle?

It is understood that the blockchain project adopts the Libra trading rule and the triangle economic collision model (the money stability rule proposed by the famous American economists), which is researched and developed by the world’s second largest hacker organization, Carbanak, and disclosed publicly on the dark network for the first time. Carbanak is a hacking organization for financial institutions. In 2017, it began to become a white hat hack and set foot in the field of blockchain. Among the Carbanak organizations, there are computer talents, early researchers of BTC, university professors, financiers, US Army veterans, American stock market operators, musicians and members of international NGOs who have been involved in the NATO military organization. They have been active in the global darknet for a long time, focusing on the global trend, the trend of financial environment and the changes of science, technology, and finance caused by the conflicts in some international regions In the form of self-organization, they secretly participate in many major global events. One of their common beliefs is that human beings are free. He respected the Austrian School of economics and regarded Friedrich Hayek as the leader of his organization. 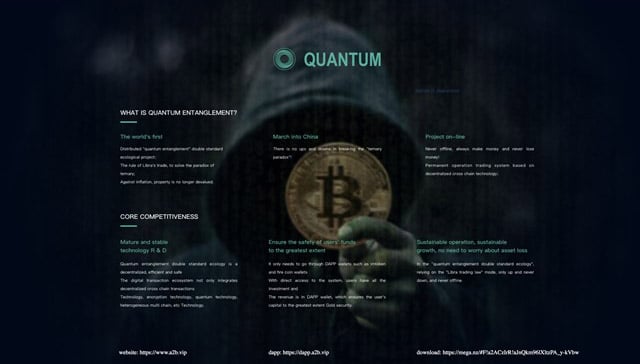 The birth of quantum entanglement originated from a physical concept. Quantum entanglement is a unique phenomenon in quantum mechanics. No matter how far apart a pair of particles are, when another particle spins, another particle will spin at the same time. The phenomenon of quantum entanglement shows that particles can break through the boundary of space-time and transmit information faster than the speed of light. Einstein called this phenomenon “ghostly existence”. In a specific case, two protons are ejected in the opposite direction. When two protons move, they can maintain the information connection between them, and the information connection completely ignores the distance.

The Dawn of Global Financial Chaos

For a long time, there has been an insurmountable obstacle in International Economics: the ternary paradox, which was put forward by Paul Krugman, an American economist, also known as the “Impossible Triangle”, that is, under the conditions of open economy, the independence of domestic monetary policy, exchange rate policy and the free circulation of capital can not be achieved at the same time, but can only meet two goals at the most, and give up the other one To achieve the goal of regulation.

At present, the global economic growth supported by the wealth effect of the global asset price bubble has brought the monetary authorities of various countries into serious inflation, currency depreciation, and rising prices, the assets in people’s hands have been diluted, and social wealth has been gradually transferred to the rich class. At the beginning of 2020, the new crown virus is rampant and the regional conflict is serious; the growth dividend period of emerging market economies represented by China is over, the conflicts accumulated in the global financial system and policy system based on legal currency are breaking out, the capital market is in severe turbulence, the dollar is in danger, and the global economy is suffering from Waterloo style decline.

In the last global economic crisis in 2008, Nakamoto invented decentralized Bitcoin, trying to eliminate the long-term control over global finance enjoyed by banks and governments. After more than ten years of development, Bitcoin has been widely recognized around the world.

This time, the decentralized quantum entanglement ecosystem emerges from the darknet, which is not only a historical necessity, but also a ray of light in the “chaos”.

At the same time, the team released the quantum task distribution system developed by artificial intelligence recognition technology as the automatic and intelligent operation window of quantum entanglement, so as to realize the automatic operation of completely decentralized ecological mechanism.

Breaking the Combo Cycle, Only Rising but not Falling

According to the KangBo cycle, the economy will always experience destruction and recovery, from recovery, prosperity, recession to depression, and keep repeating. If so, there are no stocks and digital currencies that only rise and fall in the world. We will continue to repeat the great recession of 1929 and fall on the same issues.

However, the reason why human beings are human beings is that human beings have the wisdom of thinking. How to break the Compo cycle and let the economic trend go against the trend seems to be an unnatural problem. However, with the development of blockchain, artificial intelligence, big data, and other emerging financial technologies, breaking the deadlock is the general trend.

Quantum entanglement system stands at the top of global finance to solve this problem. Through the triangle economic collision model based on α – and β twin digital currencies, gamma – coins and Tianbei trading rules, it makes the system run stably and permanently, and investors can only make profits forever.

In this system, the quantum quantities of α and β are equal but not equal. The fusion of α and β can occur after collision. The fusion of α and β will automatically tend to the high price side. According to the trading rules, when the difference between α and β is more than or equal to 9 times (for example, α = 9 β), the system will automatically assign a value to the lower price party according to the Centrifugal principle, so as to restore the balance of the trading Libra, at the same time, the automatic price difference between α and β will reverse, and the game will resume normal operation again. The two-level reversal is endless. If the cycle goes on, α and β will be higher and higher, and they will only rise and not fall.

Theoretically, as long as there are two people involved in the quantum entanglement system, the system can run forever, achieving the effect of never offline and never closing the disk.

Quantum entanglement builds an unbreakable ecosystem with advanced financial technology. As long as two people participate in it, it can operate permanently and decentralize without any group or individual will. What it creates is a new world, which will inevitably have a devastating impact on the traditional centralized financial system, which will be a milestone in the history of human finance.