RLD.DAO’s Ambition: To Be a Revolutionary Presence in the Crypto

With the noise, Chaplin’s excited speech, known as the most daring political declaration in history, shouted the slogan “Fight For Liberty” in the era of Nazism, inspiring the people to reflect, resist, and inspire. People took off their masks one after another, giving them a kind of spiritual strength, like a new life.

This is the ending fragment of the movie “The Great Dictator”, and it is also the core concept of the RLD.DAO project. Take off the mask and look directly at power and injustice, fight against, and enjoy everything in this world fairly.

RLD.DAO works step by step. Early BTC evangelists discussed and implemented projects on Discord/Telegram/Twitter, conducted multiple rounds of CK audits, and silently completed the concept of RLD.DAO. From the birth of the project to the current period of slow expansion, RLD.DAO has gradually accumulated a group of members with common beliefs and emotions, called “believers”.

At this moment, we have awakened the revolutionary consciousness of the people. The combination of ideological blessings, believers’ support, and equal wealth theory has quickly aroused heated discussions in major communities.

What Is RLD.DAO? Is It the New Form of DAO?

In terms of business logic, RLD is the first DAO organizational ecological product built on the HOTPOT platform using the Bonding Curve coinage model. From the product point of view, it is the best place to collectively build and fund digital infrastructure in the form of DAO.

But RLD.DAO is more like a DAO ecological-level product, which is all-encompassing.

More than a decade ago, the subprime mortgage crisis and the European debt crisis swept the world. More and more governments chose to use currency expansion to deal with the crisis, which led to inflation and competitive currency devaluation. The historical opportunity for the rise of centralized finance. Later, people put the decentralized Crypto idea into practice through DAO.

But the new era requires a new narrative, and “The DAO” 1.0, which only takes one thing as its platform, needs to be upgraded urgently. The escalation of ideology is often the most fanatical. RLD.DAO uses a new manifesto, complete community governance, decentralized transaction mechanism, private key destruction, and an inclusive economic model to bring RLD.DAO’s decentralized ideology to its peak. This is “The DAO” 2.0 the first step.

What Is the Economic Model of RLD.DAO?

To put it bluntly, RLD.DAO obtains governance credentials in the form of coins (by anchoring BNB), through which the existing benefits within the RLD ecosystem can be enjoyed. The minted BNB will enter the treasury (fund reserve pool), which is equivalent to having a price guarantee for investment.

In order to balance the efficiency and decentralization of development, RLD.DAO adopts a restricted authorization model, with conditional participation in community governance. Constrained authorization allows individuals with specialized and closely related knowledge to perform their work autonomously, while at the same time Still responsible for the DAO.

Among them, all transaction fees related to RLD tokens will also be filled into the treasury as a fund reserve pool. Among them, the taxes and fees generated by the transaction will be returned to the governance members in the form of direct referral incentives and treasury. When governance members sell RLD tokens, they are also destroyed according to the contract. The deflation caused by the destruction of a large number of tokens and the high liquidity brought by the boanding curve model, under the dual stimulus, are an important way to support the currency price. 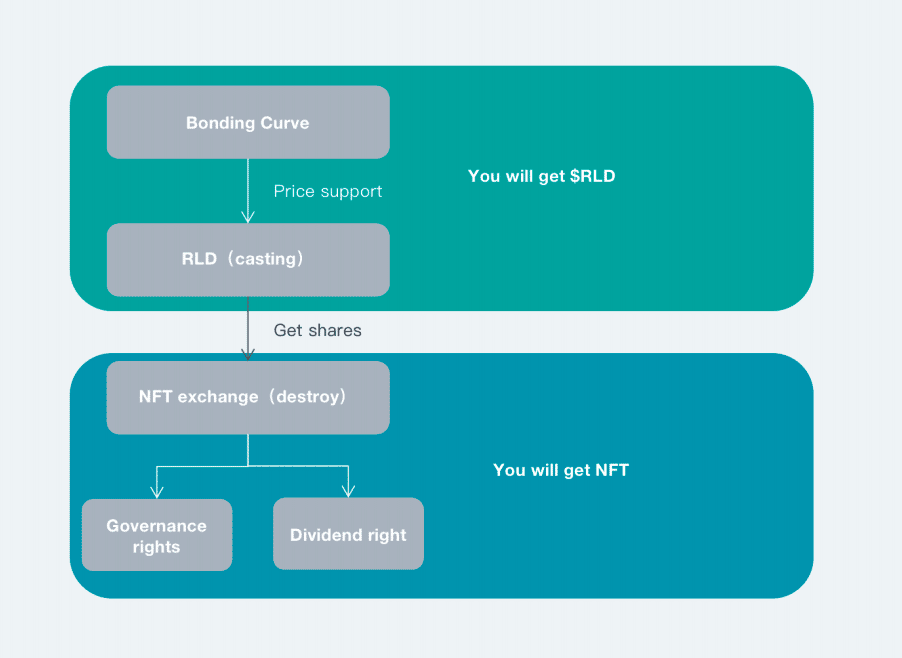 What Is the Business Logic of RLD.DAO? 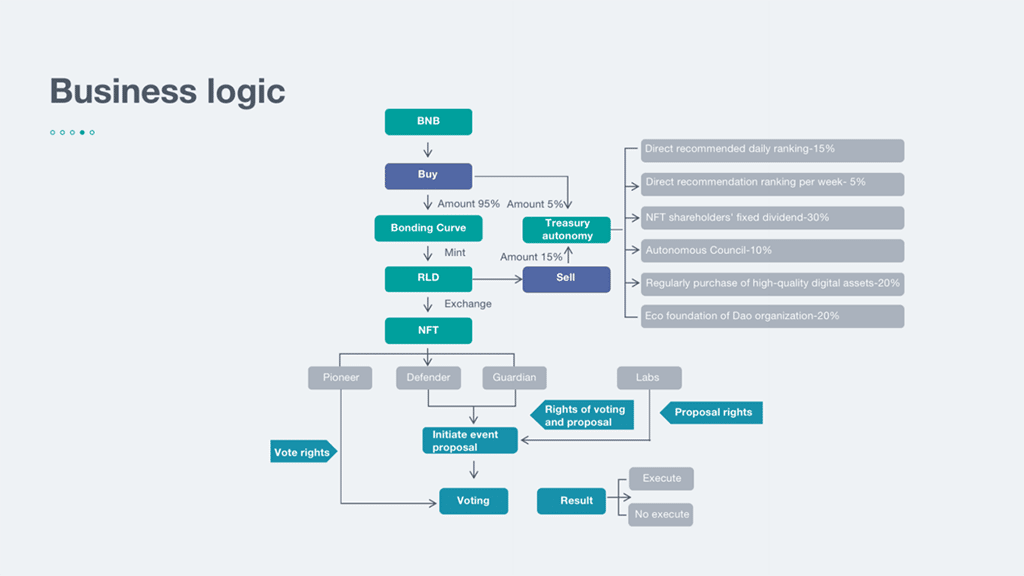 The business logic of RLD.DAO is divided into systems, which are composed of taxation system, treasury system, governance system and coinage system. Each system performs its own functions, but they are interlinked and closely linked. These four systems constitute the underlying architecture of RLD.DAO:

Through these four major systems, people will enjoy the collision between capital, culture and products.

In general, RLD.DAO will be the next cryptocurrency revolution. With its advanced concept, it is destined to leave an indelible mark in the world of blockchain economy. If RLD.DAO is regarded as a practice and challenge to global centralization and continues the thought of Satoshi Nakamoto, then RLD.DAO will be a sample in the world.