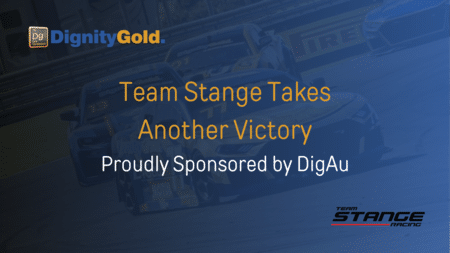 Results from the second weekend of the Dignity Gold GT Sprint Race at Velocitta in São Paulo, Brazil are in, with Team Stange Racing claiming victory in the opening race and finishing the day in second place for the overall points championship.

In Sunday’s opening race (race 3 on the overall schedule), Team Stange’s Pedro Costa in the number 77 Dignity Gold Ford Mustang started in 10th place and immediately charged to the front of the pack. He went on to finish second in the PRO category but was ultimately awarded the victory after the initial first place finisher was penalized 20 seconds for illegally bumping and pushing another car out of the way.

“Motorsport is really impressive, and for me to come from PROAM and now win at PRO is very rewarding. We are in an excellent position to compete for the championship. We can fight for the title, but it will take consistency to ensure that things stay that way.”

The second race (race 4 overall) was won by Thiago Camilo in car number 21, which was engineered and maintained by Team Stange Racing. Team Stange’s Pedro Costa sustained a first lap accident which resulted in the loss of number 77’s front bodywork and hood. Costa, however, was able to keep the car going and eventually finished 11th.

“It was another successful weekend for Team Stange, Pedro Costa and our number 77 car. We are pleased to be in second overall for the points championship and as we begin to prepare for the third weekend of the Dignity Gold GT Sprint Race on May 1, we like the momentum we have. We’ll continue to work hard towards our goal of winning the championship.”

Team Stange Racing expanded into the IndyCar Series in 2019, finishing 22nd in the Indianapolis 500. Its goal for 2022 and beyond is to consistently compete for wins in the NASCAR Cup Series, and multiple racing formulas in both the USA and internationally. Team Stange Racing aims to build a motorsports empire looking at other motorsport disciplines to compete in 2023 along with NASCAR and the GT Sprint Race in Brazil. For more information, follow Team Stange Racing on Instagram, Facebook and Twitter.