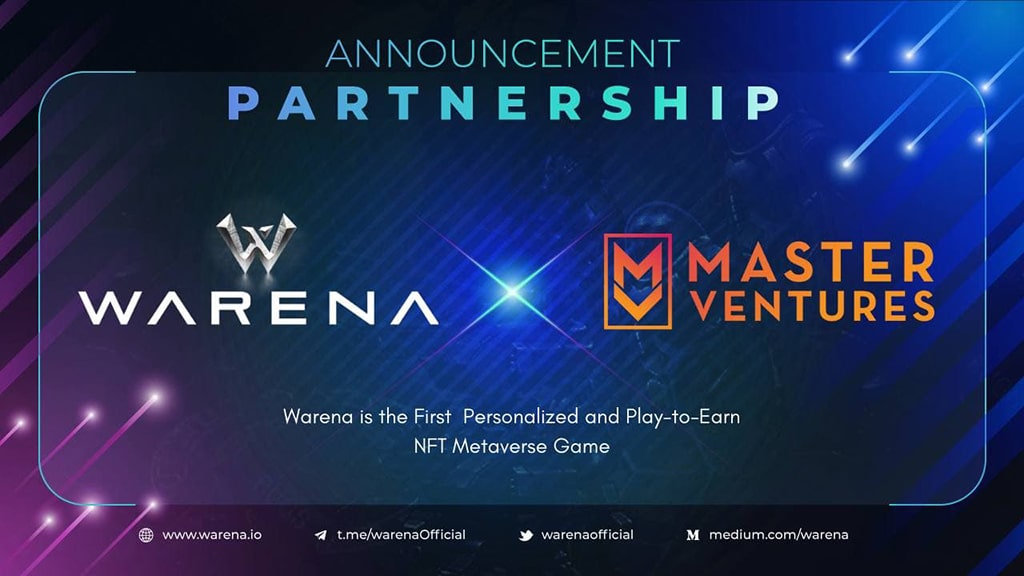 The aim of the partnership is to secure the capital needed to expand on the opportunities and game elements available to players. The Master Ventures partnership will allow Warena to scale and provide their NFT owners with a truly revolutionary game that’s much more than just another RPG shooter. They will have a first-class ticket to the rapidly growing world of decentralized finance and play-to-earn blockchain gaming.

Players of Warena will be able to create unique items to use within the game and sell them to other players. The financial incentive to create in-game content will mean that players are encouraged to explore the Warena Metaverse and spend time creating new in-game assets that create value for the individual and the entire ecosystem of Warena.

“Warena is paving the way to the development and adoption of an entirely new generation of games that are no longer controlled from centralized servers, but are run and scaled in a sustainable fashion by the players themselves.”.

Apollo-X is an IDO launchpad managed by Master Ventures and PAID Network. It aims to be at the forefront of introducing the most promising new blockchain projects while providing expert advice and solutions for startup businesses.

Star Atlas, like Warena, is a revolutionary game backed by Apollo-X. It’s a virtual gaming metaverse that combines blockchain technology, real-time graphics and multiplayer video games. Its players have the chance to earn real-world value through the native token Atlas ($0.00138) and Polis ($0.138) that are earned by selling in-game assets like skins, ships and weapons. Star Atlas has already sold nearly half a million dollars worth of token ahead of an airdrop to players.

The early success of Star Atlas has been supported by Master Ventures and Apollo-X. The IDO launchpad has helped the project to find its voice and stand out from the crowd by sharing its story with its engaged following of investors and gaming enthusiasts.

Now, it’s time for the successful launch blueprint from Apollo-X to combine with Warena’s innovative play-to-earn metaverse and original story plot to position it as the hottest NFT game in the world. On the 3rd of September, PAID Network tweeted about the most exciting blockchain games to watch. They listed Warena alongside Star Atlas and four additional projects.

Furthermore, since the announcement of the partnership, the Warena Twitter community has expanded from less than 10K followers to over 50k followers in just 4 days. So, it’s clear that the Warena x Master Ventures partnership is already creating a lot of hype. It seems blockchain gamers cannot wait to get involved with Warenas play-to-earn metaverse.

Both Warena and Star Atlas highlight the advent of a new era of gaming. With the help of blockchain technology, gamers can finally enter a symbiotic relationship with the games that they participate in. They will have the chance to convert their time spent on NFT metaverse games into real monetary value. They can finally leave behind parasitic games like Fortnite & World of Warcraft that hoover up funds without ever giving back to the community.

DeFi Tokens Poised for a ...