When the Bear Market Meets with the World Cup, How to Cast a Hundredfold Benefit under a Headwind at CoinSwap

The quadrennial world carnival is slowly kicking off, and the 2022 Qatar World Cup will be officially held on November 21st. For the majority of fans in the cryptocurrency world in a bear market, this is not only a world football feast, but also a rare opportunity to achieve a flip-flop profit. According to the official news, in order to celebrate the World Cup and the official launch of the first open NFT market on the Caduceus chain, the world’s first decentralized Metaverse financial one-stop service platform Coinswap.com “CWC NFT” (CoinSwap World Cup NFT) will mint series limited edition NFT, customized NFT for each team. Users can collect cards to form “World Cup Card”, “Top 4 card” and get high bonuses at low cost, get a hundred times the income!

In order to let all users feel the charm of football tournaments and let Coinswap fans play side by side with their favorite football teams in a more trendy way, Coinswap.com has combined football tournaments with NFTs and designed super interesting ways to play ,which inspired by the 32 teams in the 2022 Qatar World Cup. The total number of NFT team cards issued this time is 200,000, of which Qatar is the rare host NFT with only 32 cards issued; the eight traditional strong teams such as Brazil, France, Argentina, England, Spain, Germany, Netherlands and Belgium have 100 cards each. 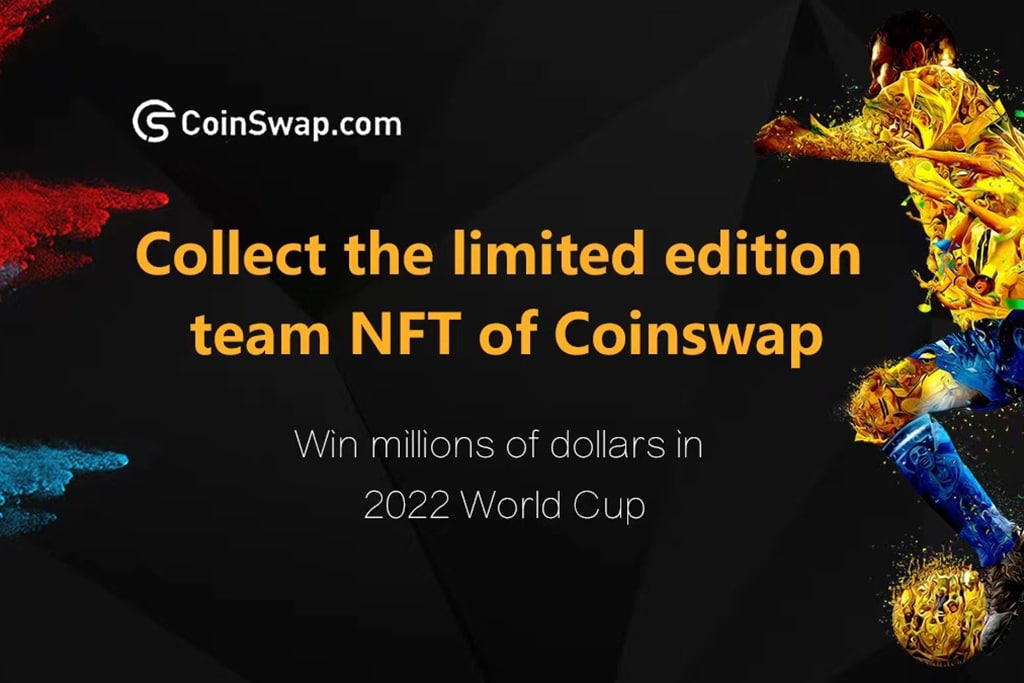 The core gameplay of this “CWC NFT” event is to collect the corresponding team NFTs to share the huge prize pool: collect all 32 team NFTs to form the “World Cup Card”, and each “World Cup Card” will have a prize of 15,000 USDT; collect 4 World Cup Top 4 NFTs, you can form a “Top 4 Card” and share 45% of the prize pool. Last but not least, become the 50,000th, 100,000th, 150,000th, and 200,000th blind box buyer can share the huge FOMO rewards. This event is very conscientious, the threshold for participation is very low, the cost of a single mint is only 50 CMP, the fee is negligible. For less than the cost of a glass of bar brew, you can get the opportunity to win a million dollar prize. If you can integrate the “World Cup card”, the return will reach a hundred times the real deal! Even if you don’t succeed in betting on the final top four, the combination of tamper-evident, traceable nature NFTs and the legendary moments left by each team in the tournament will have the potential for huge collector value and appreciation.

CWC NFTs for popular teams are scarce and need to be snapped up early, but the good news is that the first open NFT market on the Caduceus ecosystem is also coming to Coinswap.com to coincide with the World Cup event. All CWC NFTs can be freely traded on Coinswap.com’s NFT Market, the first open NFT market based on the Metaverse public chain. Users can independently mint their own image, audio and video NFTs; as an open NFT market, they can freely set royalties for trading; and support cross-market trading of NFTs on the same chain at very low fee.

As a powerful next-generation public chain, Caduceus and Coinswap.com have joined forces. CWC Limited Edition NFT has great collector value and extremely high return rate, which can bring a profitable opportunity for majority of users to turn the tide against the bear market.