On June 8th, 2019, the YAP CHAIN Foundation announced that they have obtained exclusive Korean rights to the distribution and development of APOS A8, the best-selling Android POS (Point of Sale) system created by Ingenico (known as LANDI in China). The deal was secured through a contract with ICG (Intelligent Coupon Group Limited)

Ingenico is the world’s largest POS company with a global market share of 40%. They are leaders in the development of simple payment authentication systems. In particular, the APOS A8 smart POS terminal has the ability to push updates to other POS devices using remote update functionality and enables a variety of rich use cases through location-based services.

Under the contract, the YAP CHAIN Foundation receives exclusive rights to the product in Korea, including distribution, system development, and updates. They are also pursuing the development of Korean package updates to POS devices currently installed overseas.

“In particular, we are going to first target 10 million POSs that are installed in China. In order for crypto currency to be activated, we need to have three beats of interface, user, and service (dApp) and this exclusive POS contract is part of our interface strategy.”

The Foundation also hopes to establish joint ventures for exclusive rights in Sri Lanka, Malaysia, and India, in keeping with the future activation of the domestic market.

Twenty types of crypto currencies, including YAP CHAIN’s “YAP STONE”, will be supported through the POS. The Foundation noted that they have developed a system for virtual currency exchange through the POS to enable such payments. In addition, the company has stated that it is revising its regional currency strategy, including the launch plan for College Coin, to place emphasis on the POS system.

“We received KC certification as the first global Android-based POS, and already had competitive inquiries from major Korean POS providers, simple payment companies, and virtual currency issuers prior to securing this contract.”

The YAP CHAIN Foundation is aiming to develop an independent block chain ecosystem optimized for Smart City which is an urban operational system for organizations, shopping malls, and cities. The YAP CHAIN platform currency is called “YAP STONE”.

Through the issuance of YAP TOKENs, which is minted by YAP CHAIN, the Foundation also provides local governments the ability to issue their own digital currencies. Similarly, college districts can enable cryptocurrency economies through the issuance of college coins based on smart contracts. 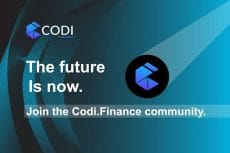 CODI Is Pleased to Announ...

Crypto Eats Is Looking to...