Cryptocurrency market on the last day of March thrilled some investors in the field as Bitcoin dropped nearly $2K in minutes, and all major coins suddenly turned red. Stepping into April I would like to suggest 3 altcoins to watch in April as they have some updates to share.

Starting with GRT the token of the Graph – Google of the blockchain. The regular process of querying data on a blockchain would require an engine to search for the particular parcel of data in all blocks starting from block 1, which is very time-consuming. To increase the speed of a search, projects usually use data storage projects like Filecoin and Storj or build their own data-base. For a decentralized world, such an approach is somewhat inconvenient as the dApp and it’s end-user now have to rely on the controlled data-base. This is where the Graph steps in with its indexing protocol.

The Graph is a protocol for querying blockchain data using the projects own GraphQL. Anyone can build an API and query data from projects to replicate on the application, these API’s are called subgraphs. Currently, the Graph hosts all of the subgraphs ever built on their hosted service.

In April the Graph will be transitioning the protocol into a mainnet network, where all of the subgraphs will be stored and the developers will have a single Gateway to request for any data they require for their app.

The Graph already powers projects like Aave, Uniswap, Balancer, CoinGecko, Synthetix, Decentraland and others. The project claims that they want to support a broader decentralization to Web3 and DeFi and eliminate the possibility of API’s, servers and data-bases to become the single point of failure and control.

From the technical point of view, GRT/USD remains bullish above the support zone (pink rectangle) and above the dynamic resistance of the local high (pink line). According to the price action on the chart, it seems that GRT is about to form an inverted head and shoulders pattern and jump to $2.15, although this should be confirmed only if the altcoin breaks above the previous resistance of $1.88. Closing above $2.15 will support another jump towards $2.72 and if GRT keeps the bullish pace, it will reach $3.20 by the end of April.

There was a huge gap in terms of a trading platform, traders globally were divided into fractions whereas some liked the simplicity of the trading platform on one exchange, the others wanted more tools to firm their signals. Another inconvenience still is the availability of a particular token on an exchange which a particular user doesn’t have an account with or use much. Even if he does, it would require him to transfer funds, wait for the transaction to complete, open the platform, remember the platform etc. No longer with an all-in-one shop named Orion Protocol. Orion protocol provides seamless trading and swaps between CEX, DEX and Swap pools, all in one platform, one account, just connect your wallet. Fees allocated to all activities are paid in ORN tokens and as the user base of the platform increases, so will the volume and the price of ORN. Since the launch of the first testnet ORN token price increased by more than %400. The testnet stage included several phases, and in each stage users were getting access to the testnet to trade on the platform, while the majority of users were still on the hold waiting for the mainnet launch.

As per the technical analysis, ORN/USD is in the uptrend channel and uptrend sentiment remains. There is a resistance at $26.7 which will trouble the bull run, however in case that resistance is overtaken, ORN will continue towards $29 and to $33 above this level.

Neo, one of the oldest alternatives to the Ethereum blockchain has launched it’s N3 mainnet. The timing for the roll out of the update that makes Neo blockchain as an “all-on-one” infrastructure can’t be better as there are obvious concerns around the Ethereum network. Neo N3 features updates such as built-in oracles, on-chain governance, decentralized identity protocol, distributed object storage system NeoFS which is expected to be launched in April. As the project states, the new version of the blockchain will increase the transaction speed from 1K per second to 5K per second and reduce the transaction fees by 100 times. Low transaction fees definitely will give an edge to Neo before Ethereum as the known “high gas fees” on Ethereum blockchain is the pain of users for some time now. Two notable features of N3 are native oracles and decentralized storage, meaning that dApp developers will rarely to none require the use of Chainlink and Filecoin.

There is a great impulse on NEO/USD, signalling the continuation of the climb inside the uptrend channel. 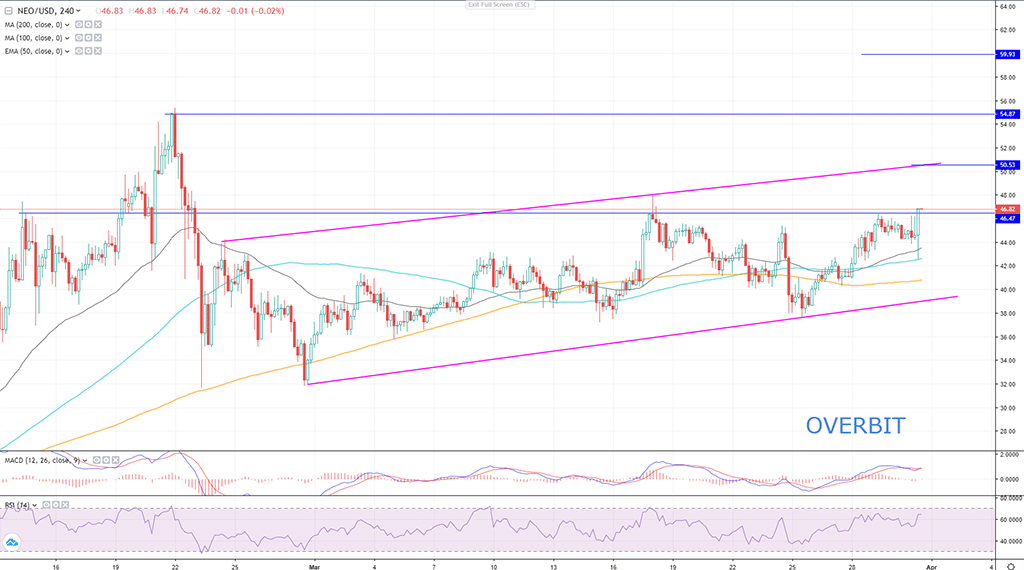 The first resistance which may lay off the uptrend is located at $50.50 and if NEO is able to close above this resistance, there is a great chance that the coin will continue the surge towards $55 and $60.

There are several points of support that back the uptrend of NEO, see the chart below. 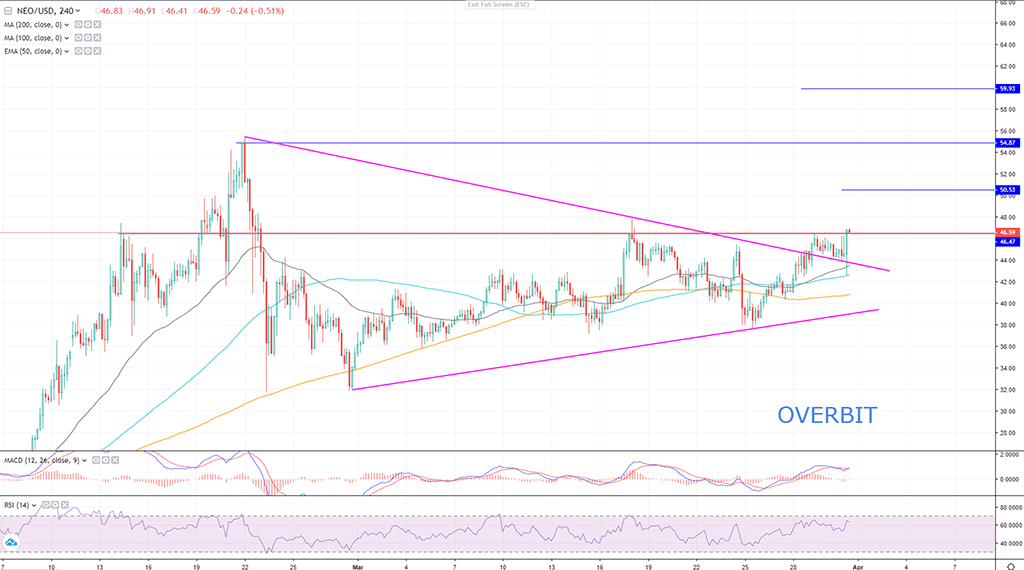 As seen on the above 4H NEO/USD chart, the pair has made a major contribution towards the uptrend continuation, notably a breakout from the symmetrical triangle. NEO has also tested the upper edge of the triangle as support, which is also an important step for the trend continuation confirmation. Whilst, RSI shows that NEO is overbought, MACD line is still over the signal line, and the last completed 4H candle has touched MA100 and EMA50 indicators to turn them into its supports.

The bears have completely gripped the market within their claws, and there are hardly any convincing signs of a bottom formation.

Calgary neobank Neo Financial joined a handful of tech companies with unicorn status in Alberta following a round led by Valar Ventures.

While both CEXs and DEXs have laid the groundwork for the vast majority of crypto users worldwide to seamlessly buy, sell, and trade digital assets, increased scrutiny from government and financial regulators is impacting more widespread adoption to an extent.