Finishing the business week with some big announcements made by Theta Network, Stellar Lumens and Neo.

Theta announced today that it has launched the ThetaSwap v1, the first DEX for Theta Blockchain. The ThetaSwap is built on AMM (Automated Market Making) logic similar to UniSwap, which allows to seamlessly exchange TNT20 – Theta-native tokens built on Theta Network. Theta sees a great opportunity in use of Theta Network and ThetaSwap for influencers, streamers, who build their fan tokens and pools and DAOs to fund entertainment and media ventures. Theta team in their announcement post on Medium also noted that they expect the launch of media/entertainment tokens to be a major theme for 2021, as everyone from the smallest streamer to the largest Hollywood studio looks for new ways to monetize their content in a seamless and decentralized way, free of middleman fees.

ThetaSwap supports Theta Chrome Wallet at the moment. Only TFUEL and TNT20 tokens are available for trading on ThetaSwap v1, though the team behind Theta assured that several Stablecoin issuers are interested in adding their coins into the exchange, and Theta will add more coins into the ThetaSwap.

As the Network is growing and is adding new features, THETA/USD is hitting new all-time-highs. Currently the ATH of THETA/USD is sealed at $2.57920 and according to the chart analysis, there is still plenty of room for growth.

Theta is currently testing a very important resistance at $2.51 and $2.57 area. The previous high is withholding the price from an uptrend continuation while the resistance at $2.57 which is an upper threshold of the ascending channel signals a correction. RSI and MACD indicators also support correction up ahead, and in case that happens and the pair doesn’t break above the $2.57, the price will drop to find support at $2.23 and a psychological strong support at $2.00. The breakout from the current resistance will result in a surge towards $2.80 and towards $3.30 above that level.

Major Update Was Introduced By Stellar

Stellar and Circle have completed the minting of USDC on Stellar, making USDC stablecoin integration into Stellar blockchain. The USDC (US Dollar Coin) a stablecoin developed by Circle Internet Financial and backed by Coinbase, has $6 billion coins in circulation. The circulation of the USDC has doubled since December after a global payment provider Visa has announced that it will add USDC for its 60 million merchants. Circle CEO and founder Jeremy Allaire praised Stellar and said that Stellar is designed for payments. Migrating USDC from Ethereum network to Stellar will significantly improve transaction speed and decrease fees.

Stellar-native token Lumens has reacted to the news and with this major partnership and update, Lumens now looks as one of the most promising altcoins.

Lumens against the USD is one of the altcoins that occasionally forms large triangles and most of the time, these triangles signal the upcoming uptrend of the pair. The all-time-high of XLM/USD was sealed on January 7 at $0.41194 and to reach this level XLM has to close above the current resistance of $0.36000. Currently the pair is testing the upper edge of the triangle as support, and is a good sign of the uptrend continuation, however to firm this, one should wait for a breakout of the weekly high. If the breakout is confirmed, XLM will continue the uptrend to test $0.37897 and $0.39600.

NGD – Neo Global Development team announced that they have released the final Preview5 update before the NEO 3.0 iteration. The latest update includes several developments and new features such as oracle module, state-root,  built-in name services, native ledger contracts. Optimization includes an important update for block synchronization which based on this update is performed using hash or index. These updates also signal that the long-awaited Neo 3.0 release is coming in the nearest time.

Whether it was the release of these updates or a global crypto sentiment, NEO cancelled the formation of the unlikely chart pattern on it’s price chart – Head and Shoulders. And the current state of the price action drags attention to the pair. 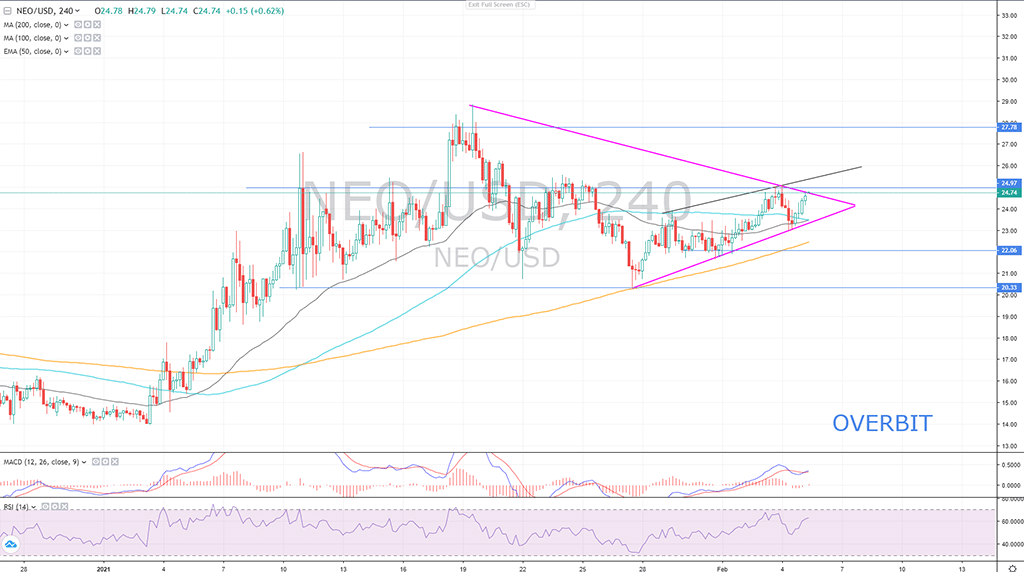 NEO/USD is being challenged by two major resistances at the moment, the dynamic resistance and the static at $25. There is an ambit of resistances at $24.70 – 25.50. The pair has formed a triangle pattern on a 4H chart, and as the distance of the last candle and the lower edge of the triangle is very narrow, we can assume that yesterday NEO did the final test of the lowed edge of the triangle to jump higher. Nevertheless the optimism of this assumption, the confirmation of the next uptrend will be recorded only when NEO/USD breaks above the 25.50, which will give strength to another impulse up to $27.70 and $28.70. MACD is already bullish on NEO/USD, so as MA100 and EMA50, RSI nears the overbought zone and is correcting.

Investors are always looking for the best cryptocurrency ecosystem, and notably, many are focusing on market newcomer Orbeon Protocol (ORBN) which has already seen 525% returns in presale.

Cosmos (ATOM) is a decentralized network of blockchains that continues to persist, and Theta network is famous among different streaming platforms.