One major advantage of the swappin.gift platform is that it is easily accessible to users in over 40 countries.

According to a Press Release shared with Coinspeaker, the integration now makes it possible for Ambire Wallet users to interact with swappin.gift right from the comfort of their homes in a cheap and sustainable manner.

According to Ambire Wallet, the integration of swappin.gift was made possible with the help of the released plug-in system and dApp Catalog earlier this fall. This unique feature that was floated by Ambire Wallet positioned the protocol as a crucial access point for both emerging and established players in the Web3 world.

Since the dApp Catalog was created, it has made it possible for a wide range of users to access on and off-ramp services in ways that are not just user-friendly but also very convenient.

By onboarding swappin.gift, users can turn their cryptocurrencies into proper legal tender. The integration will enable users to spend thousands of digital currencies resident on hundreds of blockchain protocols. The flexibility in the swappin.gift product offering is a testament to the ability of Web3 innovation to adapt to the exact need and requests of users.

Ambire is designed to make the functionalities of integrated protocols like swappin.gift to be well enhanced. With the help of the Plug-In system, Ambire Wallet now supports applications across twelve EVM-compliant chains, fostering interoperability among all of the protocols hosted in the dApp Catalog.

One major advantage of the swappin.gift platform is that it is easily accessible to users in over 40 countries, further complementing the core goals of Ambire Wallet to grow into a platform that can be accessed anywhere in the world. 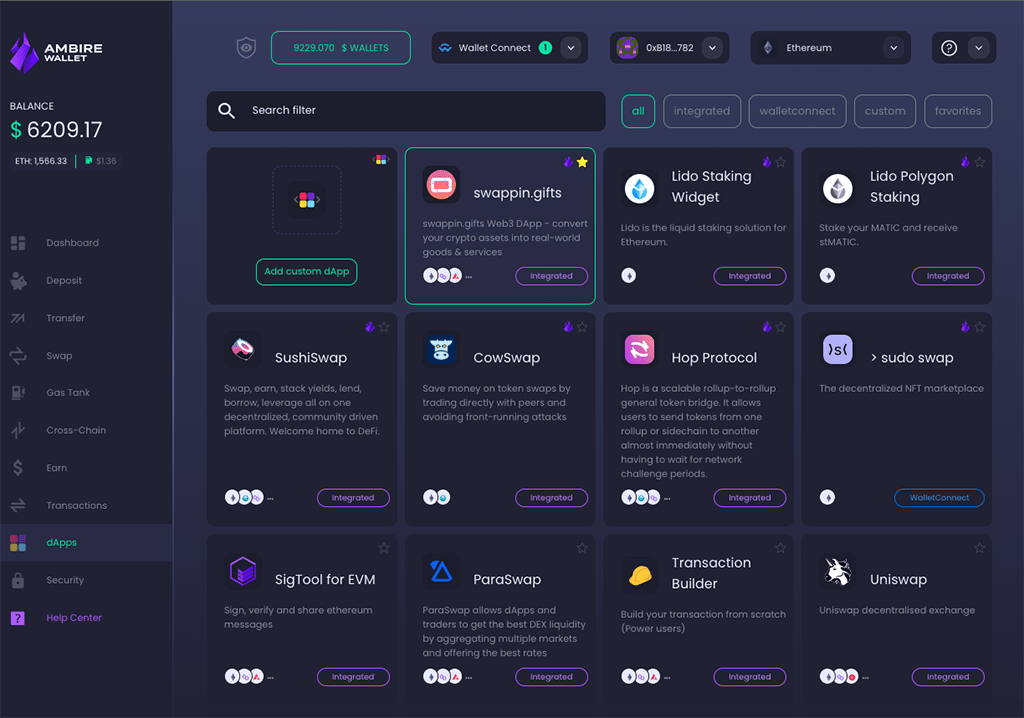 To adopt and make use of the swappin.gift service that is now visibly available on the dApp Catalog of Ambire Wallet comes with additional perks through an ongoing promo that was launched to commemorate the partnership.

The promotional campaign is set to span for 2 weeks beginning on the 3rd of November until the 17th. The promotion will afford all eligible users the opportunity to win up to $1,000 in crypto prizes. The opportunities to earn a prize are notably enhanced as Ambire Wallet has created prize tiers for participants and users will be chosen for each tier via a draw.

The wallet protocol is doing all it can to foster the broad adoption of cryptocurrencies and blockchain technology and per its mission, the onboarding of swappin.gift is considered a step in the right direction. The protocol plans to onboard more functional platforms to further enhance the real-world utility for all of its wallet users.

In January we will have the opportunity to attend the most prestigious event within the industry of Blockchain technology ever held in Granada.

Even if you limit your focus to the realm of crypto and sports betting, you will still have too many options to wrap your head around.