The price of Bitcoin is in red as negative sentiment in the market continues to push the valuation of risky assets to its lowest levels in months.

Some weeks ago, hawkish comments from the head of the United States Federal Reserve were perceived as the cause for another wave of selling in the financial markets.

During a conference organized by the International Monetary Fund (IMF), the Chairman of the Fed, Jerome Powell, stated that a 50 basis points increase in the federal funds rate – the central bank’s benchmark interest rate – was on the table during the upcoming meeting of the Federal Open Market Committee (FOMC).

Powell also commented that officials will now start to focus on how to progressively reduce the central bank’s massive $9 trillion balance sheet as a way to contain the advance of inflation in the United States.

Last month, the country’s Consumer Price Index (CPI) jumped 8.5% compared to a year ago. This was the highest year-on-year reading reported by the Bureau of Labor Statistics since 1982.

Even though White House officials and even President Joe Biden have blamed Vladimir Putin’s actions in Ukraine as the leading cause for this uptick in prices, truth is that other factors including the massive amount of liquidity injected into the financial markets during the pandemic and supply chain bottlenecks are also contributing to pushing the price of goods and services higher.

In this particular environment, investors seem to be fearing that the Federal Reserve will be forced to raise rates to levels not seen in decades and that would have a direct impact on the valuation of risky assets including Bitcoin (BTC) and cryptocurrencies.

Even though the latest downturn may have made cryptos more appealing, prompting many to rush to their favorite stock market app to get their hands on a Bitcoin ETF or buy some coins directly from a pure-play crypto exchange, the technical situation for this digital asset is worth looking before making any rash decision. 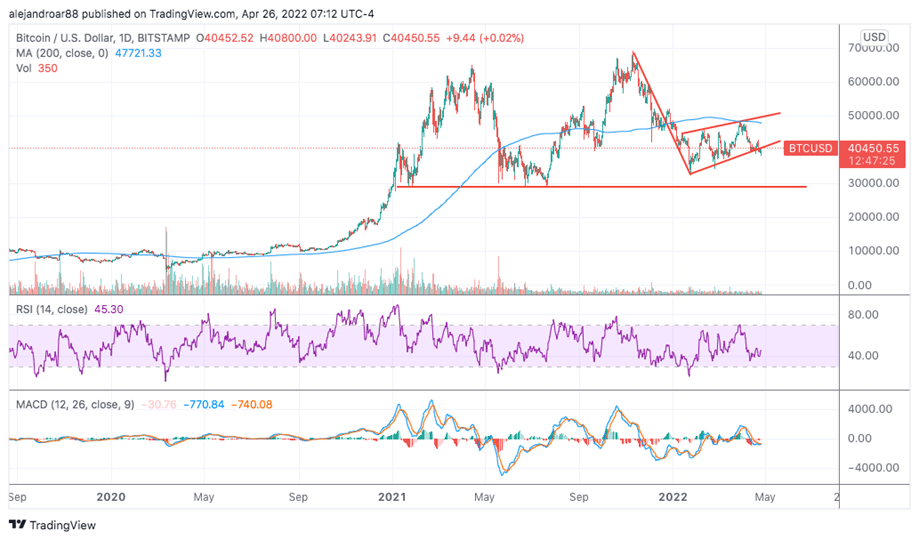 Analysts have alerted multiple times about the presence of a bear flag pattern in the Bitcoin price chart that, if broken, could signal that the cryptocurrency might be due for some more pain.

A bear flag pattern is formed whenever the price of a security takes a breather after a sharp downtrend. In this regard, the price of BTC has been dropping steadily since November last year amid multiple negative catalysts including expectations about an upcoming tightening in the monetary policy adopted by major central banks around the world and, later on, due to the war between Russia and Ukraine.

This decline pushed BTC below its 200-day simple moving average but the price eventually bounced after it hit bottom at around $32,630 per coin. However, this temporary technical rebound failed to move above the 200-day SMA and that is a technical event that favors a short-term bearish outlook for BTC.

As of today, the price has already broken below the bear flag. If the decline continues in the next two or three sessions, Bitcoin could be poised to retest its 2022 lows pretty soon and that would result in a total downside risk of around 16%.

Overall, for long-term holders, the price might seem more attractive if they expect that some of the market’s boldest forecasts will come to fruition in the next one to three years. However, for those whose investment horizon is quite short, the technical situation doesn’t look too promising at the moment.

Why Are the Fed’s Actions So Important for BTC?

Interest rates, inflation, and the size of the Federal Reserve’s balance sheet have a significant influence on the valuation of risky assets.

Interest rates, on the one hand, determine how much investors expect to receive from low-risk assets such as US Treasury bonds and other similar securities. If these low-risk alternatives start to offer higher yields, investors will prefer to park their money with them rather than exposing it to the volatility of riskier asset classes such as equities and cryptos.

Therefore, if interest rates rise, the valuation of risky assets will tend to decline. That said, the extent of such decline will depend on how high-interest rates go.

If policymakers fail at containing this escalation in prices, demand for Bitcoin (BTC) and other assets considered a store of value may rise and that could have a positive effect on the valuation of the digital asset.

Finally, a reduction of the Federal Reserve’s balance sheet will reduce the market’s overall liquidity. Lower liquidity typically means that less money is chasing the same number of assets and that tends to reduce prices down the road.