Usually, when Bitcoin is making impressive moves, many who has FOMO may take a dive into storing up on the coin, while this may complement the recent moves, its impacts may not be long-lasting.

Bitcoin (BTC) price has a surge that raises its price to a 16-month high following the announcement that PayPal Holdings Inc (NASDAQ: PYPL) has launched its long-anticipated crypto payment service that will aid merchants to receive payments for goods and services in Bitcoin (BTC), Ethereum (ETH), Bitcoin Cash (BCH) and Litecoin (LTC).

As expected, key Bitcoin enthusiasts or figures have expressed optimism for an increased rally in the price of Bitcoin. Chief amongst these is Tyler Winklevoss who noted that the influence of PayPal will stir a “flippening” as Bitcoin and crypto will likely take over the role of fiat currencies. He tweeted:

“PayPal is an important bridge between the mainland and the island of crypto. The diaspora from legacy finance is happening and this is the kind of infrastructure that will help make that happen. Soon there will b a flippening and crypto will b the mainland & fiat the island.”

The upward surge in the price of Bitcoin has a strong backing when analyzed using technical analysis provided by TradingView. On the BTCUSD chart, the Relative Strength Index is at 84.07 as at the time of writing showing the intense buying action of the market bulls. A look at the Bollinger Bands also lends credence to the upward momentum as the BTC price movement as shown by the candlesticks is wrapping the upper bands, a sign for a massive bullish momentum. 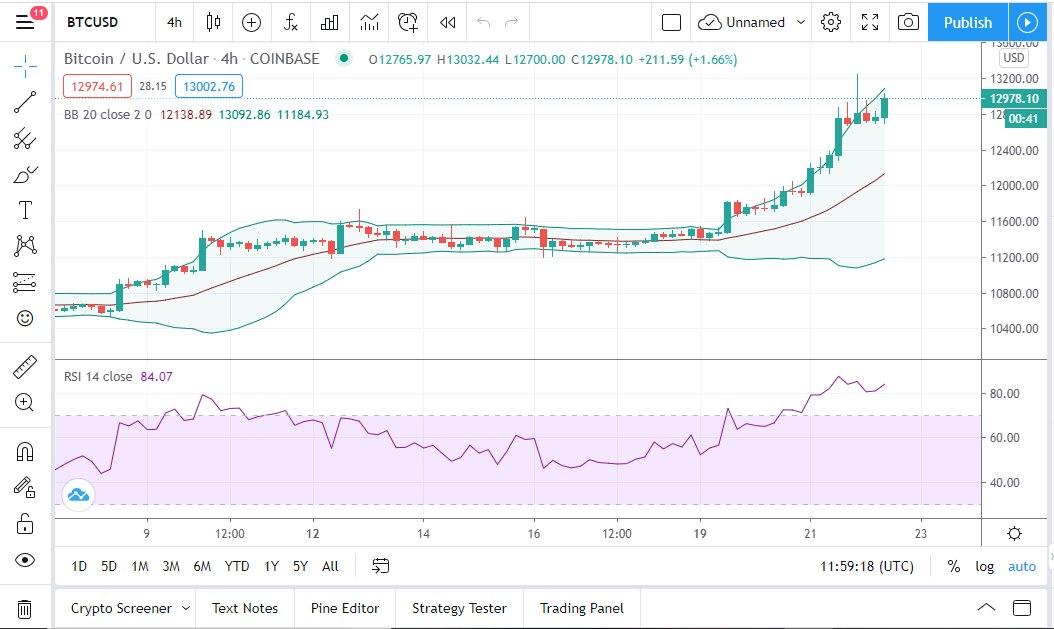 Bitcoin price has initially broken past the $12,800 support line when it shot up above $13,000 earlier and should if the technicals are anything to go by, this may turn out to be the new support for a while.

Usually, when Bitcoin is making impressive moves of this nature, many who has Fears of Missing Out (FOMO) may take a dive into storing up on the coin, while this may complement the recent moves, its impacts may not be long-lasting.

As noted earlier the influence of PayPal may drive increased adoption among merchants and users may switch to the supported coins as a means to try new intriguing alternatives. This adoption by merchants will complement the bet most institutional investors are already placing on Bitcoin.

For this article, we’ve used BTCUSD chart by TradingView.