Looking at the BTC charts, many have a question: where has such growth appeared from and where is it heading for today and in the nearest future? However, the situation on W1 may calm everyone down: the quotations remain inside the actual midterm channel. The price has tested its upper border. Its breakaway will allow rising to the resistance line of the long-term trend – the level of $10550.00 USD. And then the market will decide what to do next: form a new long-term bullish trend or bounce and reverse to the low of $3121.90 USD. The dynamics of the MACD and Stochastic lines remain descending, which also supports the bears. 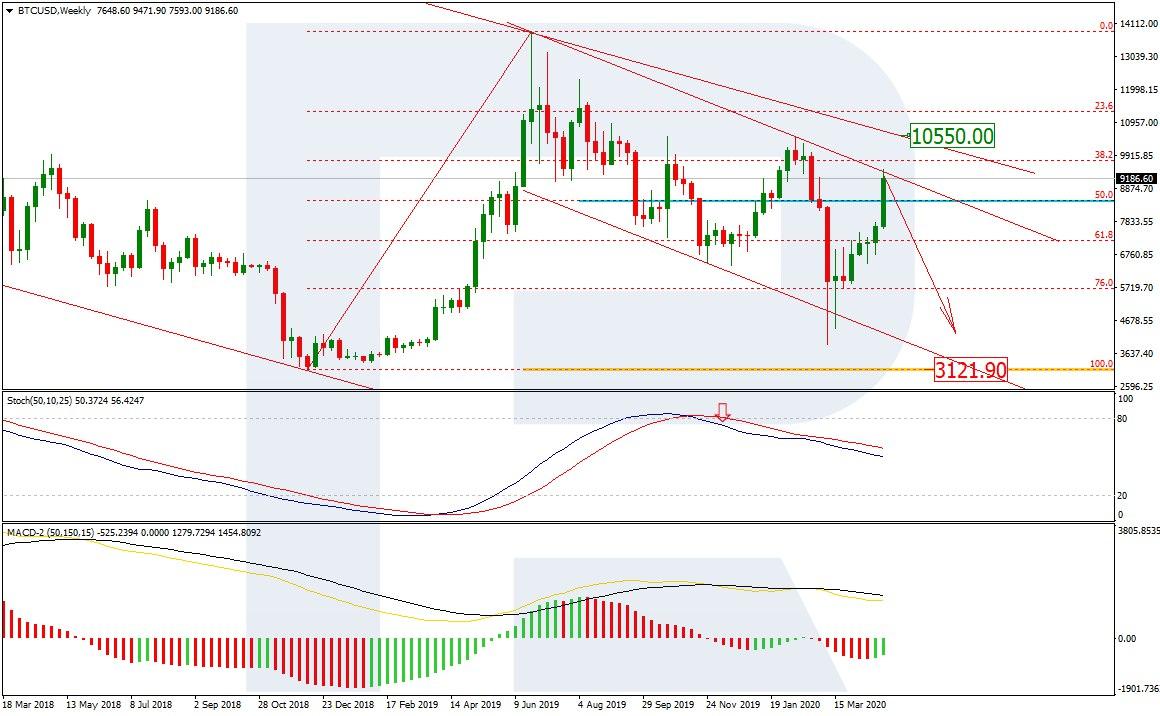 On D1, BTC/USD is testing the resistance level of the short-term ascending channel. The MACD lines heading upwards hint on the possibility of further growth, however, a quick pullback to the support line on $7650.00 USD is neither excluded. A breakaway of this support may mean a serious probability of further descending to the last low of $3925.70 USD. 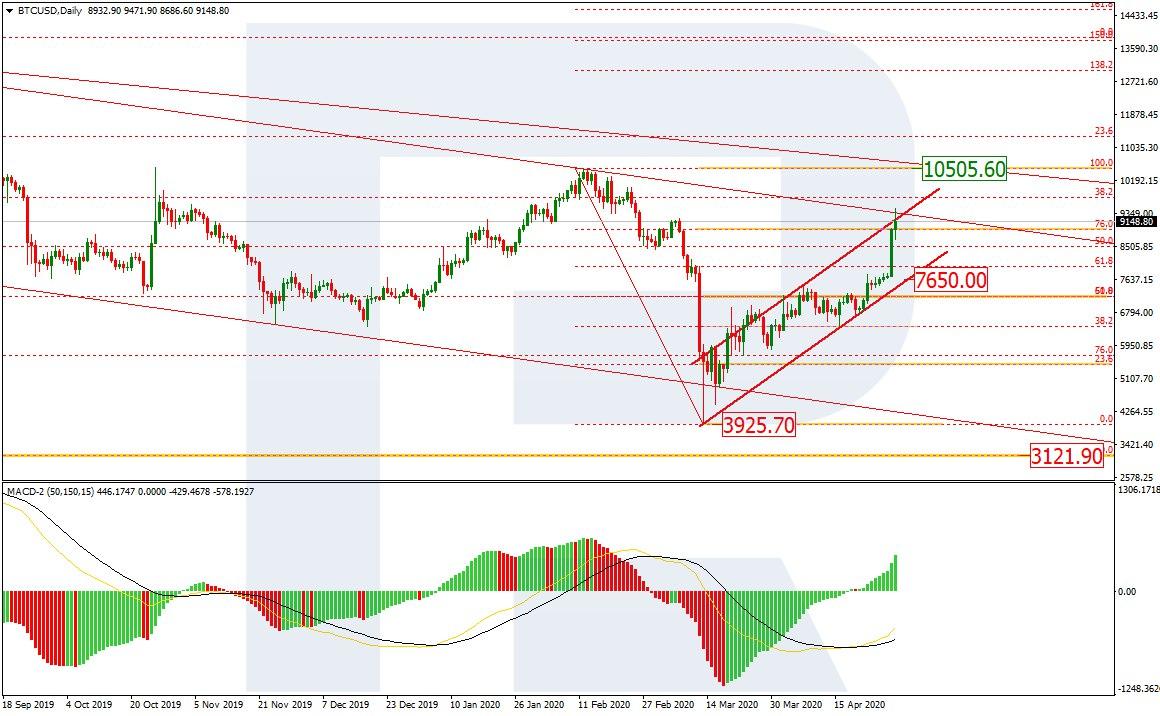 On H4, the quotations have sky-rocketed after consolidation in a narrow range. We may suppose that such an active rise is a temporary and short-term reaction to the accumulation of positions in the flat. Hence, a pullback or even a reversal will not take long to follow. Yet another signal for a trend reversal will be a Black Cross on the Stochastic. 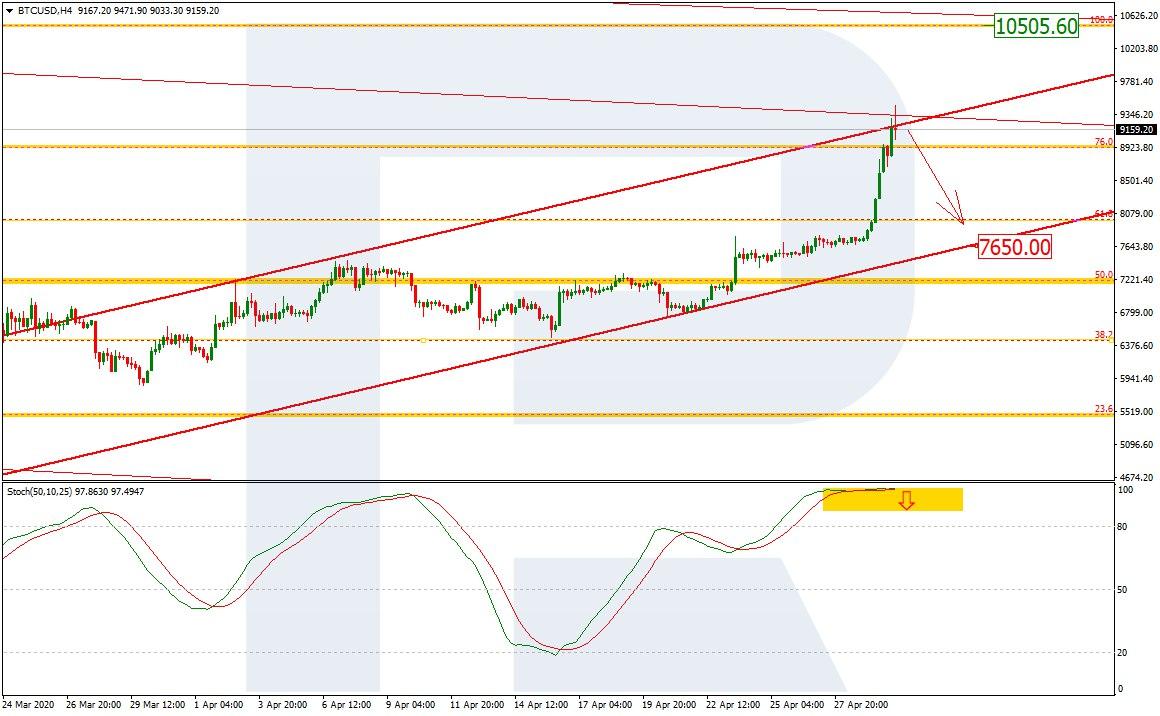 During these last couple of days and today, the BTC price has grown significantly. It seems quite impossible to single out one and the only reason for such growth. However, we may name several factors.

Firstly, the BTC halving expected soon may have become a catalyst. According to preliminary data, it is due on May 13th at 1 a.m. Moscow time. As we know, by the halving the reward per each mined block will be reduced two times – to 6.25 BTC from the current 12.50 BTC. It is planned that BTC mining will become less interesting, thus, the number of coins mined will decrease, which will affect the BTC price positively.

However, not everyone is so optimistic. For example, a trader under the nickname Joe007, who is the leader of the crypto traders’ rating of Bitfinex, is sure that the potential of halving for enhancing the BTC rate is significantly overestimated.

Secondly, the growth of the BTC rate during the last 24 hours may be connected to the actions of the U.S. Fed. In its April session, the Fed promised to support the economy by some new financial measures as it sees a serious threat of a decrease in the economic system. Most probably, the Fed means a new block of support measures, i.e. it will switch on the printing machine again. The probable increase in the money stock in the USA (in addition to the current state) may have sent the investors to look for alternative income sources – such as the crypto market. However, we absolutely must not think that the crypto sector is becoming safe for fiat money – several market slumps this year have proved it.

The inside source made assertions that Goldman Sachs is avoiding cryptocurrency brokerage services which are currently being provided by a number of US-based cryptocurrency exchanges including Coinbase, and Gemini amongst others.

Galaxy Digital is in a unique position to help connect operators and equipment providers with capital.

The Bitcoin resistance at $40,000 may be a new inflection point for the coin to soar to the new heights that it has always been projected to reach.

Bridging The Gap Between Blockchain And The Automotive Industry