Today, on April 9th, BTC price started to grow again but now it is slightly falling. However, Bobby Lee believes that Bitcoin must renew its all-time peak by the end of this year and proceed to 25,000 USD.

Bitcoin is generally trading at around 7260 USD today. The sales of the last two days have been localized, and the market is clearly making its mind about the next step.

On W1, the Bitcoin is developing correctional growth after a wave of declining. The downtrend, as well as the general market mood, remains bearish. The aim of the main trend is the fractal low of 3121.90 USD. The resistance level is 8500.00 USD. The declining dynamics of the MACD and Stochastic confirm further decrease. 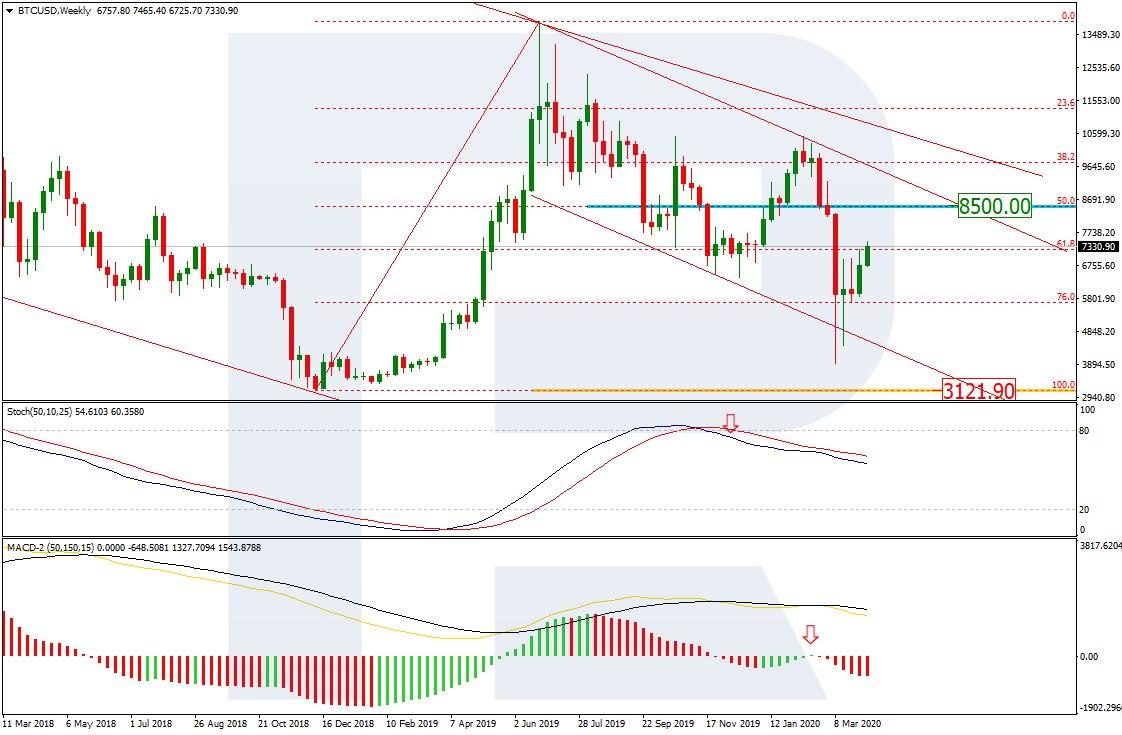 On D1, the correctional uptrend has somewhat slowed down upon reaching 50.0% Fibo. The next aim of the growth is 61.8% (7985.00 USD). A breakaway of the current support level of 6965.00 USD will signal a decline to the low of 3925.70 USD; the MACD lines aimed downwards forecast further declining. 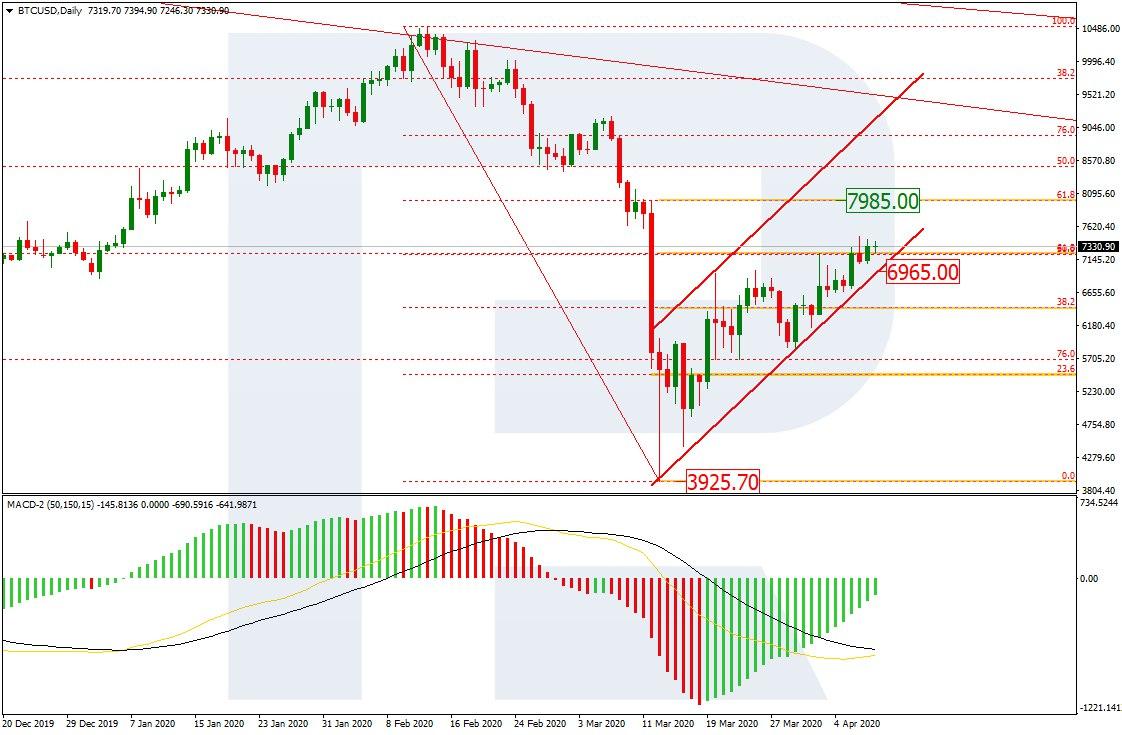 On H4, the ascending is presented in more detail, the quotations are moving along the support line. However, the Stochastic in the overbought area, preparing a Black Cross, looks alarming. This signal, combined with a breakaway of the support line, will mean the end of the correctional phase. 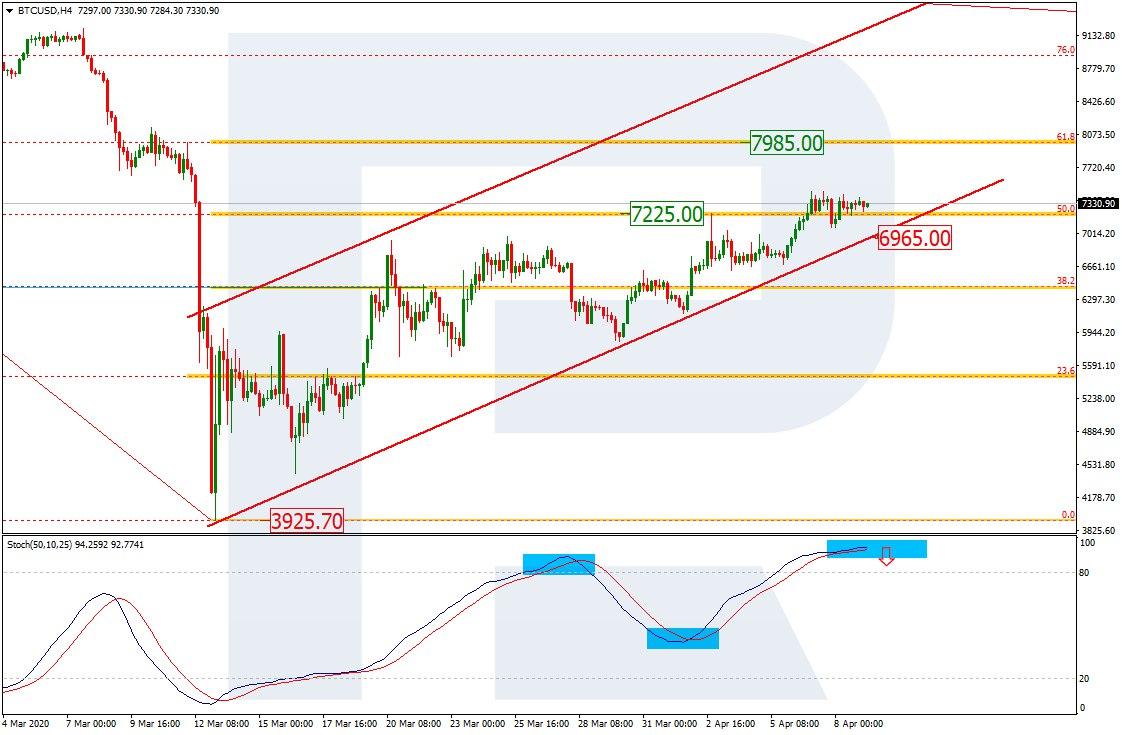 According to the head of Bitcoin Foundation Bobby Lee, the BTC price must renew its all-time peak by the end of this year and proceed to 25,000 USD. As the key factor of the growth, Lee suggests the halving. This will be first such reaction on a decrease of the reward for mining.

Lee states that the halving will raise the BTC rate. Moreover, he does not exclude the possibility that the price of the leading cryptocurrency may rise thanks to an inflow of investors, disappointed by basic assets and seeing a potential of safety in cryptocurrencies.

In March, users mining cryptocurrencies earned 380.1 million USD on the BTC. This is 25% less than they managed to earn in February. The source mentioned that the coins mined could be sold right away, while their price formed based on the closing price of the daily candlestick.

In 2019, the overall miners’ profit was estimated at 5 billion USD. That year, the most successful month was July, when miners earned about 650 million USD.

Bloomberg expects BTC to jump over $15,000. The company based its reasonings on fundamentals like Bitcoin’s rising hash rate and also the 30-day average of active Bitcoin addresses.

Crypto sphere has still place for a lot of fraud cases. In order to secure your crypto account we have gathered best ways how to protect yourself from scammers.

Cryptocurrencies continue correcting not far from important support levels. If they break these areas, the entire cryptocurrency market may continue the correction much deeper.