The BTC rate has been correcting for two days after mighty growth. Today Bitcoin is generally trading at $9350.

On W1, the Bitcoin restored its positions after a decline and returned to the upper border of the descending channel. The pair is currently testing 61.8% Fibo. A bounce off this level may entail another decline and the development of the downtrend. The MACD histogram remains under zero, indicating the possibility of a further decline. The signal lines have formed a Black Cross, which is an additional signal of falling to 23.6% Fibo. The Stochastic is between 20 and 80, giving no exact indications of further movement. 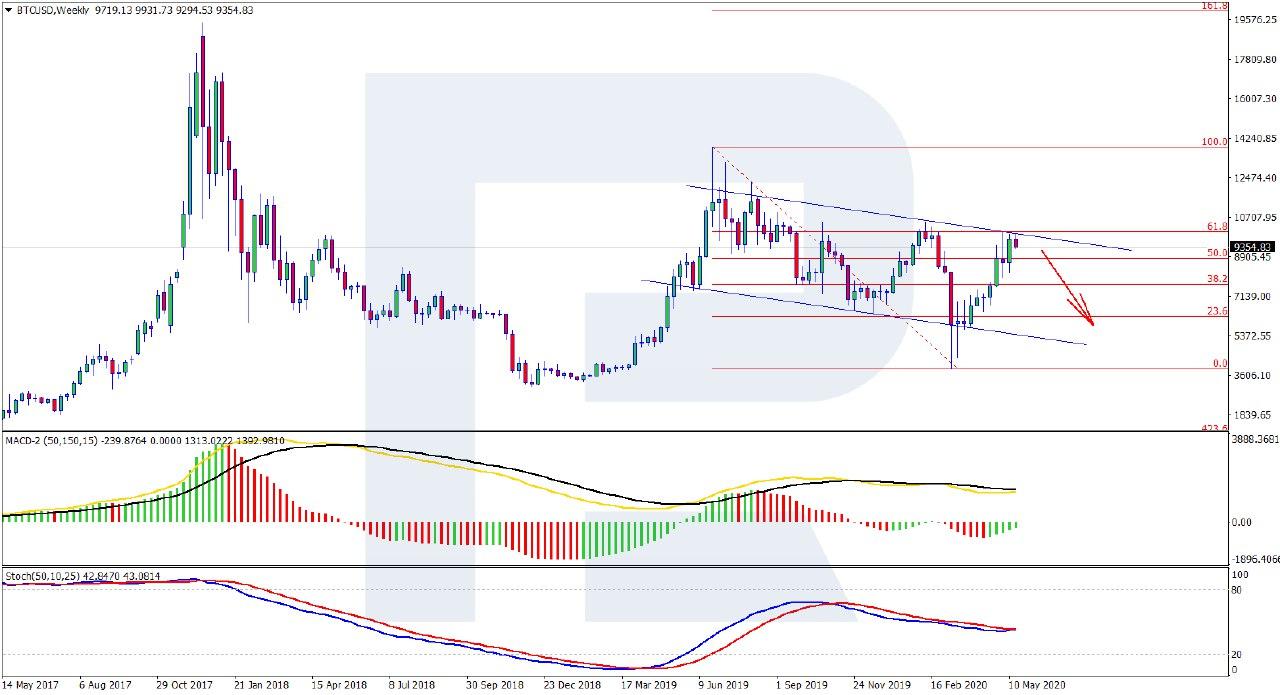 On D1, the picture is almost identical to that on W1: BTC/USD is testing the upper border of the ascending channel. The quotations are trading under 61.8% Fibo, which may signal a further decline. The aim is still at 38.2% but the price might pass it and head for 23.6% directly. The MACD is in the positive area indicating a possible ascending impulse. On the other hand, this might be the reaction of the indicator on the preceding ascending impulse. Both W1 and D1 still speak about a further decline.

On H4, the perspective is the same as on the larger timeframes. The pair is trading at the upper border of the channel, forming reversal patterns. The Stochastic remains in the overbought area, which is an additional signal of a decline. A Black Cross might form soon, which will enhance signals to sell.

Investors are following the situation with the transfer of 50 BTC which made the market nervous. A transaction of such a modest size would have passed by unnoticed, however, that digital money was mined in 2009. Apparently, they were mined in February, which was the second month of the existence of the cryptocurrency.

Market participants quickly agreed on the idea that the transaction was made by Satoshi Nakamoto, the creator of Bitcoin whose personality even today remains a mystery. No one knows if this is true because the transaction was anonymous. However, the information dropped the BTC rate immediately.

In fact, you may spend a lot of time researching the initial position of the block that contained the wallet from which the transaction was made. The truth is that the market needed a driver to correct the BTC rate and it used the opportunity.

The BTC has not yet come to any balance after the halving. A Twitter bot called Whale Alert attracts attention to the fact that capital keeps leaking from trading platforms: some 170 million USD, or roughly 17 thousand BTC, were withdrawn yesterday. The cryptocurrency went to anonymous wallets, so the movement looks more like exiting positions than transferring the finance to other assets.