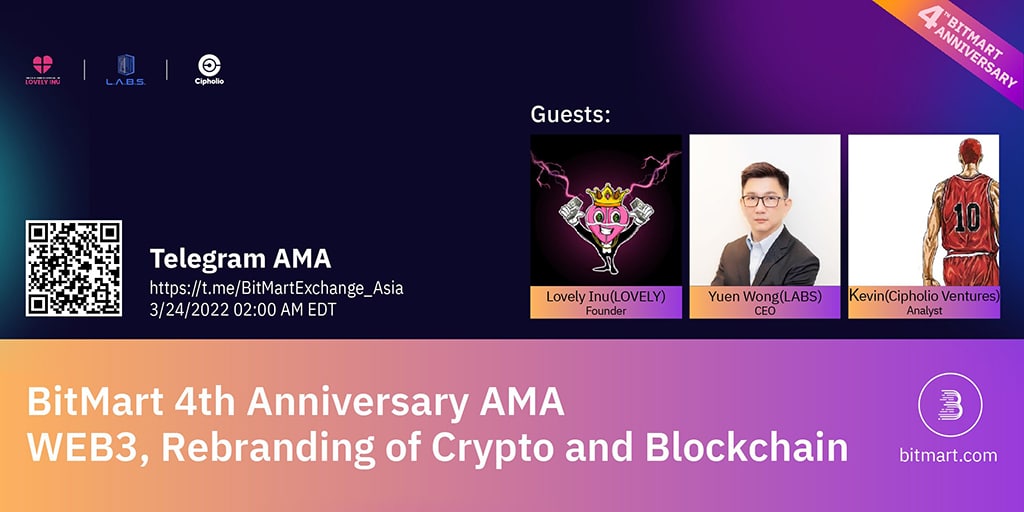 If the keywords for the cryptocurrency in 2021 are NFT & GameFi, Web3 will definitely be the most resounding keyword in 2022. The web3 is projected to onboard the next billion users. In March24 02:00 EDT, the BitMart 4th Anniversary, BitMart invited reputable guests from Lovely, Labs and Ciphilio Ventures to discuss the trending of Web3, and why it can rebrand the cryptos and the blockchain.

(The following is an edited version of the AMA.)

LOVELY: Web3 is approaching, and its concept is rooting in the hearts of the people. Not only do well-known organizations actively participate in Web3 with the hope that they can depend on their first-mover advantages in the Web3 world or the experience accumulated in the traditional Internet to get the first place, but also the public is striving to find a self-contained role in this productivity revolution. Many rigid Web2 mechanisms have been deconstructed and reorganized, and a new life has been created in the world of Web3.

With the development of blockchain technology, a number of Web3.0 related projects have emerged in blockchain ecologies, such as Ethereum and Polkadot. Relevant technologies, like cross-chain and Layer 2, are developing rapidly.

DID is consistent with the core concept of Web3.0, allowing users to own and control their digital identities. DID contains the user’s identity information and privacy data, which can only be used with the user’s authorization, and also has the characteristics of security, verifiability, and interoperability.

Web3.0 will take data security and personal privacy more seriously, computing tasks will be completed when users’ data and privacy are protected and guaranteed. Multi-party security computing is a solution of privacy computing.

Labs: Well I’m not a technical person but more a generalist entrepreneur, so let’s me already approach this with a general overview on what Web3 is Basically put, Web1 is read only (like the old Yahoo), Web2 is read and write, like Facebook. Above are both centralized.

Web3 is the creator community where users can get to own the content and hence we are moving towards a sharing economy.

There will be more SocialFi projects coming. And all these are made possible with blockchain and NFTs.

Q2. BitMart: Compared with Web2, What are the benefits and drawbacks of Web3?

Lovely: There are too many benefits. Most Important is Data’s Ownership.

In Web 2.0, tech giants control and exploit user-generated data. In blockchain-powered web3, end-users will take full ownership of the data using. You will be able to choose what information you want to share with businesses and advertising companies and make money from it.

Also, Web3 will not be controlled by a single entity. As a result, decentralized apps (dApps) would not be censored, nor will their access be restricted.

The decentralized web will enable users to track their data and look over the source code of the platforms they decide to utilize. All the stakeholders will always be aware of the value and commerce they are associated with. You will not need to rely on a middleman for access to this data.

It may be a bit complicated to understand for beginners.

Difficult to regulate: Some experts also believe that decentralization will lead to difficulties in monitoring and regulating Web3. As a result, we could see a rise in cybercrimes.

Fewer Intermediaries
Blockchain-based Web3 will connect companies directly with customers. There will be very few or no central authorities that will receive a share of earnings from electronic transactions. While the need for adequate rules and regulations to monitor fairness will still be there, we will see a shift towards trust less and decentralized networks instead of centralized institutions.

Also it maybe a bit complicated to understand for beginners

Ciphilio Ventures: The Web3.0 project is decentralized and distributed in nature, thus won’t be affected by single node failure. When some nodes in the system are disconnected, other nodes can still complete information transmission and value transfer, and the whole system will not be affected.

Web3.0 users have ownership of their own data, which is conducive to the realization of data equality. Web3.0 projects can design a more reasonable incentive mechanism, and users can participate in the development of the project and get benefits from it by sharing the data.

Web3.0 has better interoperability and portability and can realize cross-ecological interaction and break the islands-effect and barriers between data across platforms.

Based on the user permitted data usage mechanism, users can provide corresponding data according to their actual situation, and complete the interaction between ecosystems. Meanwhile, users have the permission and access rights to data, which allows Web3.0 to better protect users’ privacy.

Labs: Web2, such as Facebook and Twitter, are still centralised and hence most of the profits and returns go to the centralised institutions and hardly any if left for the creators.

Even though it is not the bulk of it.

But Web3 is different..the creator gets to own the content and monetise on it. However we are still in early stages and let’s see where blockchain and NFT can bring us to.

The challenges are to make blockchain tech non detectable right from the start and hence allowing the mass audience to be able to engage in such a sharing economy. For example, digital wallets need to be super friendly with safety issues all covered.

Q3. BitMart: A large number of participants are looking for good investment opportunities in Web3, Do you have any suggestions?

Lovely: Of course there is opportunity and also I’ve suggestion with best Web3 product lemme introduce

Undoubtedly Lovely Inu, as it’s not just a meme token anymore, utilities are on the deck.

We just launched the best version of decentralised exchange on Binance Smart Chain which is first of it’s kind where people gets NFTs when they provide liquidity, even they can manage risks by capping their minimum rate and maximum rate, so one can be saved from Impermanent Loss and the community decides how much trade fees should be charged by our LOVELY V3 SWAP.

There are many upcoming features on our V3 SWAP

Ciphilio Ventures: Participating in the infrastructure projects of Web3.0 is the most intuitive investment opportunity at this moment. As no matter which Web3.0 projects stand out, they all need the support of infrastructure. There is room for further improvement in the fields of the public chain, cross-chain, identity system, distributed storage, and privacy computing.

Aside from the infrastructure, On-chain data analysis, Identity Data Service Provider, Privacy Enhancement Technology and Bridge between Web2 and Web3.0 are also potential development and investment paths of the Web 3 project.

Labs: Well as usual, NFA and DYOR, lol, but LFG

I personally believe that the sharing economy will be big and will be here sooner than later.

I have invested in several projects  in the sharing economy, such as socialfi projects that emphasize on creator economy and community, music projects that  allow fans to own a part in the musicians’ products, etc.

Even gaming platforms that allow gamers to have a bigger say and a bigger share in the gaming play.

One project that I’m backing heavily is theGEMS.gg which empathizes with the fanfi economy.

For good projects to get involved in, I usually check on the team, the track records, the credentials and the people backing it. Since most projects are startups and it is people and experience that are the most important imo.

Of course, what are the potential value that they would bring to the table and disrupt the current economic play

Q4. BitMart: For players in the blockchain industry, how to seize opportunities and cope with the challenges in the future?

Lovely: As you would for any investment, understand exactly what you’re investing in. If you’re buying stocks, it’s important to read the prospectus and analyze the companies thoroughly. Plan to do the same with any cryptocurrencies, since there are literally thousands of them, they all function differently and new ones are being created every day. You need to understand the investment case for each trade.

In the case of many cryptocurrencies, they’re backed by nothing at all, neither hard assets nor cash flow. That’s the case for Bitcoin, for example, where investors rely exclusively on someone paying more for the asset than they paid for it. In other words, unlike stock, where a company can grow its profits and drive returns for you that way, many crypto assets must rely on the market becoming more optimistic and bullish for you to profit.

Some of the most popular coins include ethereum, dogecoin, cardano and xrp. Lovely Inu has been another massively successful token as well.

So before investing, understand the potential upside and downside. If your financial investment is not backed by an asset or cash flow, it could end up being worth nothing

Ciphilio Ventures: For projects. Changing users’ habits is not an easy task. In order to attract more users into Web3, there must be tangible benefits for the users. We believe that as the value and the time spent by the users accumulate in the Web2 platform, it is better to be remade through the Web3 paradigm.

At the current stage, the development momentum of Web3.0 has attracted the attention of many giant companies. Some companies, including Twitter and Reddit, are exploring to integrate the concept of Web3.0 into their platforms.

For users. In the future, Web3.0 will bring a different experience to users, and will fundamentally change the relationship and interaction mode between users and the Internet. Take the Gamefi project as an example, the Play to Earn model distributes revenues that traditionally belong to gaming companies to users. Besides games, SocialFi, Music Platform, Sports NFT, and Fan Economy are also worth special mention.

Labs: I personally believe the current generation is going to witness some of the biggest disruptions in the economy, which is a sharing economy.

Think e-commerce in the early days, that’s where we are right now.

Hence I would advise getting yourself involved in whatever ways you could. Talk to projects and people who are in the industry. Think hard on ideas and then talk to members who are aligned in the vision.

I personally advise on many projects to help them materialize and go to market. Hence professional advice would really help since many blockchain projects have only one chance to succeed.

Study the competitive models and tell people why the projects or solutions that you are going to be involved in are better. If not better, how to make it better.

Q5. BitMart: For cryptocurrency exchanges, like BitMart, how to give full play to their advantages in this competition?

Lovely: Exchanges like bitmart offer beginner investors a familiar, friendly way of trading and investing in cryptocurrencies. As opposed to using crypto wallets and peer-to-peer transactions, which can be complex, users of centralized exchanges can log into their accounts, view their account balances, and make transactions through applications and websites.

Ciphilio Ventures: Compared with other players, there is one unique advantage of cryptocurrency exchanges. Exchanges have a large number of users who understand and accept the concept of Web3. Therefore, BitMart can be a flow inlet of Web3 and give users better service of Metaverse.

Labs: I think we are in the early days of going to the sharing economy. Bitmart would serve well to be a facilitator for us on such projects that serve to be the gateway.

Bitmart can also help us to reach good Web3 projects. For example, GEMS gamefi and esports 3.0 platform will be conducting an IEO on BitMart.

Ultimately, in the future, it will be a combination of a centralized and decentralized economy.

The Across Protocol (ACX)... 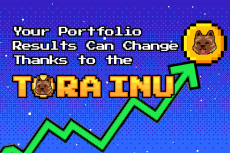 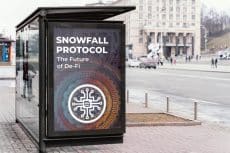