There were many fun ways of authorities trying to make use of blockchain in counting some items. This time, it is a set of collectible silver-backed coins offered by the Bank of Lithuania.

According to the press release, the Bank of Lithuania wants the youth to buy collectible coins that remind them of history, money and virtual tech. That’s why the newly prepared coins will live both on a blockchain and in real life. The physical copies will contain signatures of people standing behind the local Act of Independence from 16 February 1918.

Per Marius Jurgilas, the Board member of the BoL:

“This innovative coin will feature the signatories due to their significant role in the country’s history and contribution to the restoration of our independence. Quite a few of them could be called innovators of their time, as they created and brought progress to Lithuania”

The central bank of Lithuania prepared to issue 24,000 coins based o some kind of a closed blockchain.

Each token will contain one signature out of 20 belonging to the Lithuanian independence masters. The collectors will have a chance to obtain a full set of signatories. The tokens belong to six different categories, dedicated to specific areas of activity of the historical people from the set. That’s why each of the categories is having 4000 tokens allocated to it.

The designers picked blockchain technology to foster The Adoption(c)(tm), and they want to back the tokens with physical silver. The physical pieces look like silver credit cards nominated at 19.18 euros each and laced with HQ images. 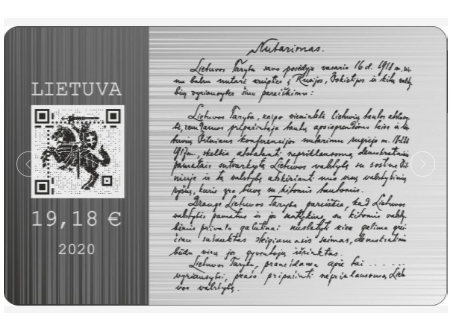 “I attempted to do a modern take on the historic photograph of the Council of Lithuania that many remember from history books.”

Users can purchase a digital coin on the bank’s official website. Then they automatically get six randomly selected coins stored on a blockchain. Once they got one coin from every category the clients can order a silver coin that backs the six virtual ones.

The Bank of Lithuania Is Discovering Secret Ways of Storing Value

Interestingly, the bank of Lithuania did not make any difference between their collectible coins and Bitcoins. But when we talk about the nature of tokens, they all different. But the killer feature is always curiosity, not just brilliant tech.

Local young men always seek fun. They can show vital interest in unusual coins backed by some mysterious blockchain copies. Buyers receive not only the tokens but also the chance to withdraw or trade-in state of the art silver cards, which is important. It gives hope for new ways of storing value, including bank accounts. They often suggest you put dollars on deposit accounts. But what if you want to put such a 19.18 euro nominated silver card, gold, jewelry, or even honey?

Gamification Can Save Unusual Coins Industry

The main secret of Bitcoin is that it is interesting. The reason behind millions of people using cryptocurrencies to get rich is because they make people wonder. While you dig deeper into them, you gradually realize that others will dig into these technologies more and more, just like you do. Cryptocurrencies are unusual like the unusual collectible coins.

They are not only a new means of payment, as well as the tool of storing the value out of banks. They provide interesting information, a new angle for people to look at life. And all that comes without the threats posed by corrupt governments, thanks to the Internet, math and open-source software.

One can only hope that the BoL manages to supply their product with a substantial amount of what they’ve called “play elements” for teens. In the correct hands, this tiny project can turn to an attempt at creating a new means of payment for the young residents of the country.