The recent rally in the ETH price happened after some key developments in the Ethereum ecosystem.

Post the Federal Reserve meeting last Friday, the world’s second-largest cryptocurrency Ethereum (ETH) faced severe correction along with the broader crypto market. As of press time, Ether (ETH) is trading at $1,573 with a market cap of $192 billion. As per the report from Bloomberg, the Ether (ETH) price could once again drop to $1,000 and below.

The Ether price has already dropped nearly 25% from the high of $2,000 two weeks back. As per the technical charts, Ether shows the risks of dropping even further. Speaking on the matter, Katie Stockton, co-founder of Fairlead Strategies said:

“Ether has broken down below initial support from its 50-day moving average, increasing downside risk with short-term momentum now negative. The weekly stochastics have a downturn for the first time since April suggesting a retest of support at about $1000 is likely in the coming days”. 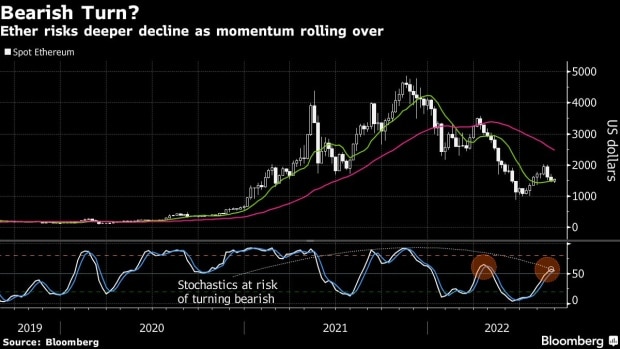 “Ethereum’s drop ahead of the impending Merge is also of note as bearish sentiment appears to be taking hold across all so-called risk assets. The volatility that has become so characteristic of the digital token space shows no signs of abating.”

The recent rally in the ETH price happened after some key developments in the Ethereum ecosystem. The optimism around ETH was due to the much-awaited Merge upgrade scheduled ahead in September.

The Merge will transition Ethereum into a Proof-of-Stake (PoS) blockchain network thereby improving the network scalability and efficiency. This will also make the Ethereum blockchain network less energy-consuming and scarce as the minting of new coins on Ethereum PoS will rarely happen as of the current PoW.

Some of the exchanges including popular ones like Binance have announced that they will halt withdrawals during the Merge upgrade. Despite the ETH price trading under pressure, the CME Group launched the EUR-denominated Ether futures contracts on Monday.