The cryptocurrency market is currently trading in the green as bullish sentiments are stirring industry-wide price gains beings led by Bitcoin (BTC). Per a deep observation of the market, the rejuvenation was spiked in the early hours of the morning as Bitcoin specifically carried over some losses from the past weekend’s trading activity.

A number of sentiments are pushing the market higher, but the rub-off is currently not showing off on the stablecoins. While these classes of cryptocurrencies and tokens are generally not subjected to extreme volatilities, most including Tether (USDT), and USDC amongst others are in the red at the time of writing, a situation that arises despite on-chain data metrics which revealed the Stablecoin Supply Ratio (SSR) per a 7-day Moving Average just reached a 1-month low of 17.635.

In a complementary move, Ethereum (ETH) appears to be done with the woes of the previous week, in which its market price was tossed up and down by both the market buyers and sellers alike. The overall performance in the market has helped add new gains to the global cryptocurrency market capitalization which is up 3.27% to $1.82 trillion.

Bitcoin’s Market Capitalization Soars Back Above $1 Trillion, Is this the SSR Effect?

Away from the lows of last week in which each BTC traded for as low as $50,856, the premier digital currency is back to winning ways, regaining its bullish path, a situation that is reflecting in its market capitalization that is now pegged at $1.088 trillion. At the time of writing, Bitcoin is trading at $58250.1, up 4.39% in the past 24 hours according to data from CEX.IO’s price feeds.

Events in the Bitcoin ecosystem are dynamic and while the market is seeing a great influx of institutional money, the retail presence in the market is also overwhelming. Glassnode data showed that the total number of Bitcoin addresses holding at least 0.1 BTC has pierced a new all-time high (ATH) of 3,223,643. By implication, this on-chain data revealed that the retailers are no more selling off, as usual, playing the HODLing game alongside the institutional investors. 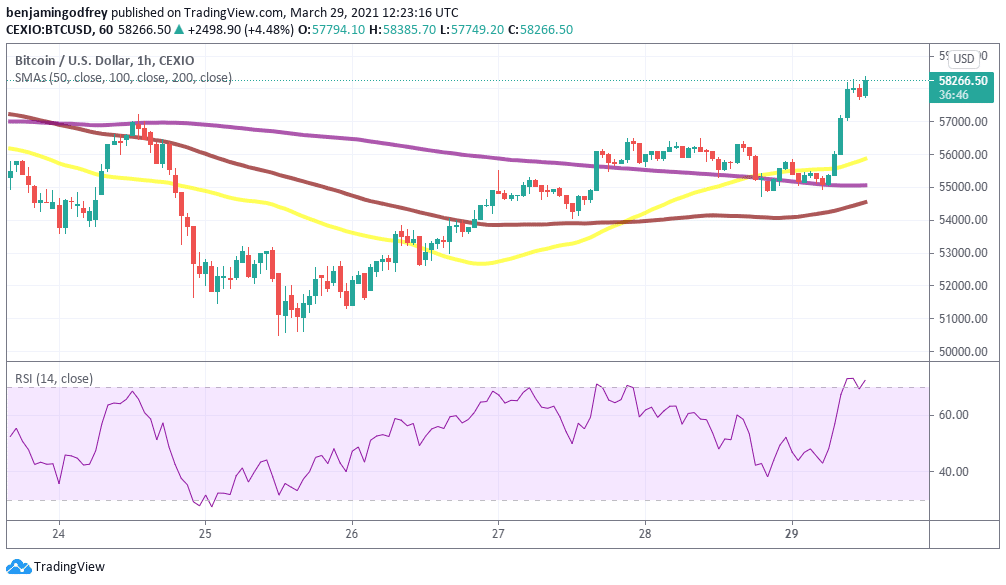 As seen on the BTC-USD hourly chart above, the spike in the price of Bitcoin took a new turn from 6 AM UTC, as the concentration of buying pressure helped the bulls regain the market. From that point, Bitcoin has breached three resistance levels including that at $56,000, $57,000, and $58,000.

Per the technicals, the Relative Strength Index is currently showing that Bitcoin is in the overbought range, as the current price of the coin is above the 50, 100, and 200 Simple Moving Averages respectively. While the influence of the SSR which has a history of fueling Bitcoin’s price cannot be discountenanced, the trend of Bitcoin at this range can take two turns; to spike further, or to record a healthy correction.

A further spike will likely push the coin above its earlier ATH of $60,000, while a pull backpack will see the price settle around the $56,000 support level. In the short term, however, Bitcoin is poised to breach the $62,000, as it looks toward a more ambitious Q2 target of $80,000.

Ethereum is also exhibiting a massive bullish spike in a correlated move as seen with Bitcoin. With each Ether exchanging hands at $1,780.01, up 5.05% in the past 24 hours, a new price discovery may be underway if the bulls are motivated enough to sustain this upward trajectory.

Per on-chain activities, Exchange outflows for Ethereum are at their monthly low according to Glassnode, a situation that subtly casts doubts on the potential surges Ethereum bulls are fueling. Consider the ETH-USD hourly chart below. 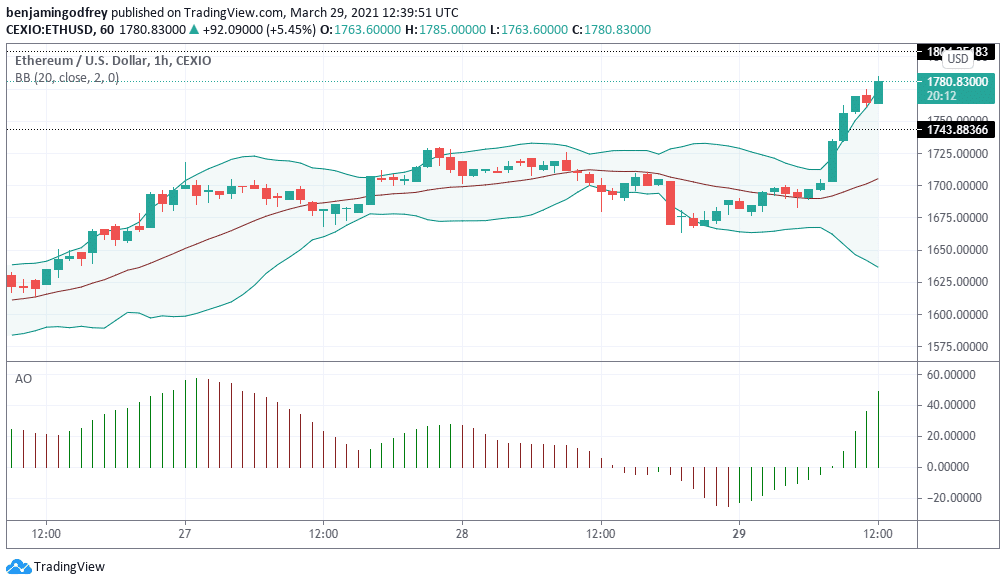 The technicals are bullish as the price is surging way past the upper band of the Bollinger Bands, with a confirmed bullish momentum given by the Awesome Oscillator whose value is well above the neutral Zero range.

While the technicals give reassurances, the market generally is at a tipping point as the reduced exchange outflow volume positions the bears at a good point to sell-off. While the market will likely consolidate, Ethereum’s bulls still have the $2,200 price target to beat.

According to earlier projections, both Bitcoin and Ethereum have surpassed their first-quarter price projection of $50,000 and $1,300 respectively. While both coins are on track for new price discovery, a sustained surge as currently being seen may fuel the attainment of a new ATH for either, or both digital currencies.