We see a potentially good year for Polkadot in 2023, but not enough to surpass its previous ATH.

Dear readers welcome to our latest edition of the Coinspeaker Advent Calendar where we X-Ray the 2023 expectations of one of the most innovative digital currencies in today’s blockchain ecosystem Polkadot (DOT).

Polkadot is an open-source sharded multichain protocol that connects and secures a network of specialized blockchains, facilitating the cross-chain transfer of any data or asset types, not just tokens, thereby allowing blockchains to be interoperable with each other. Polkadot came into the scene with a very unique offering, through the emergence of parachains.

The Polkadot ecosystem is one that has blossomed, especially since the protocols that won a parachain auction on the blockchain including but not limited to Acala Network, and Astar Network have started launching useful applications for the broader digital economy.

Polkadot’s strength lies in its associated parachains as well as in the advanced nature of the protocol in that it is one of the most flexible and adaptive, allowing the sharing of information and functionality between participants.

One major news that made the rounds earlier this year was The Merge, a transitional event on the Ethereum (ETH) protocol that saw the network move from the Proof-of-Work (PoW) to the Proof-of-Stake (PoS) system. The Merge occurred with a significant forking event that leads to the creation of the ETHPOW protocol. Unlike Ethereum, Polkadot can easily be upgraded if need be without the need to fork the existing chain.

The features exhibited by Polkadot as a programmable blockchain for DApps is one that makes a case for its longevity. With the fast-evolving Web3 and metaverse innovation, there is a place for Polkadot and by extension, its native token DOT.

This question is one of the important questions that our readers have asked us and there is no straightforward answer to provide. Notably, Polkadot is one of the most battered digital currencies in the course of this year’s crypto winter and its price has dropped from a 52-week high of $32.77 to a low of $5.01.

Polkadot’s chart on a 52-week timeframe is depicted in the chart below. 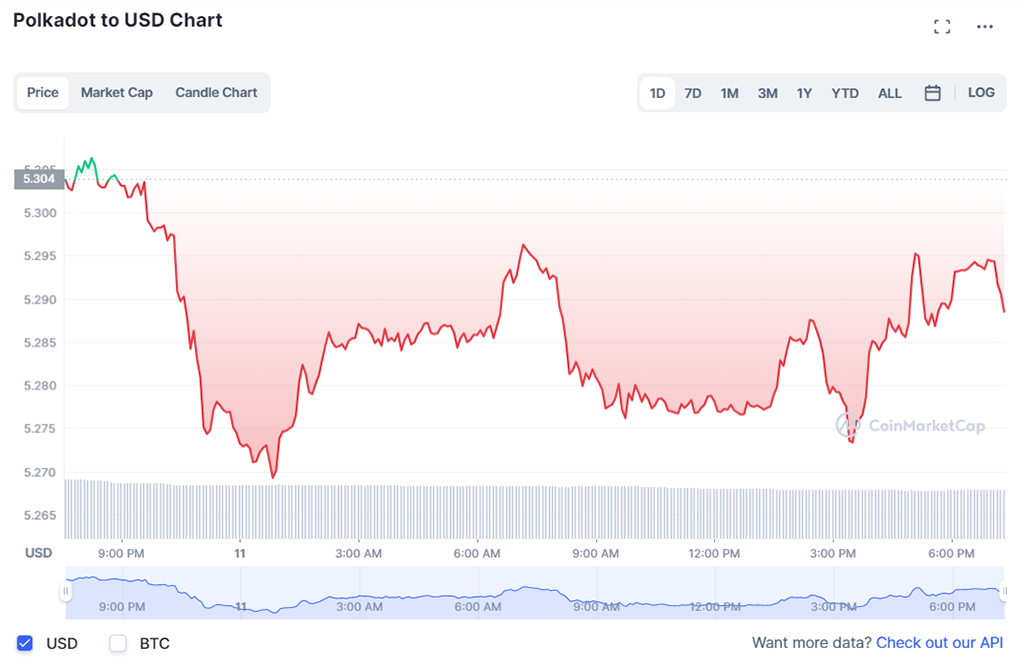 At its current price of $5.31, DOT is exactly 90.38% below its All-Time High (ATH) of $55. While this massive plunge in its value is a sign that there is a lot of room for growth over the near future, it also meant that Polkadot is very sensitive to general market strain and so, a little nudge can offset its growth run.

That being said, investors need to approach DOT with consideration for the long term. The token does not have extreme volatility moves, and as such, scalping the coin can entail additional expertise in order not to end in losses. In all, here is the potential price prediction for DOT for the coming year.

We see a potentially good year for Polkadot in 2023, but not enough to surpass its previous ATH. Investors should embrace this coin with appropriate risk management practices, knowing that these estimations may or may not be realized or surpassed.

There is the wrap for today’s episode of the Coinspeaker Advent Calendar, stay tuned with us for more interesting series ahead.

Circle, one of the founders of USDC cryptocurrency, is launching an on-chain utility to allow users to transfer USDC from one blockchain to another.

Cryptocurrencies are reforming the world of finance, and it is about time you got involved. Want to know how?