We expect TRX to print a very successful price growth throughout 2023.

Dear readers, the digital currency ecosystem needs more specificity as the investment landscape has proven to be quite unpredictable over the past few years. As our dedicated readers, we owe it to you to help you navigate the murky waters of the volatile crypto landscape and in today’s episode of the Coinspeaker Advent Calendar, we bring you Tron (TRX) and its possible price changes in 2023.

Tron is a digital currency whose dominance in the industry has been at a slow pace over the past year but has formed an ecosystem that is defined by massive stability. TRX has slipped in ranking in recent times and it is currently the 15th largest digital currency by market capitalization which came in at $4.97 billion.

TRX is the parent digital asset in the Tron blockchain ecosystem which also encompasses such digital currencies as SUN (SUN), and Just (JST) amongst others. The Tron digital currency is currently priced at $0.05399, down by over 83% from when it printed its All-Time High (ATH) of $0.3004 about 5 years ago.

A note of caution we would like to resound to our readers is that a cheap coin does not necessarily represent a propensity for an impressive price surge over time. TRX has underperformed relatively from its peers as it has only recorded a growth of 4846.27% from its lowest price point of $0.001091 inked 5 years ago.

Tron’s price trend is shown below. 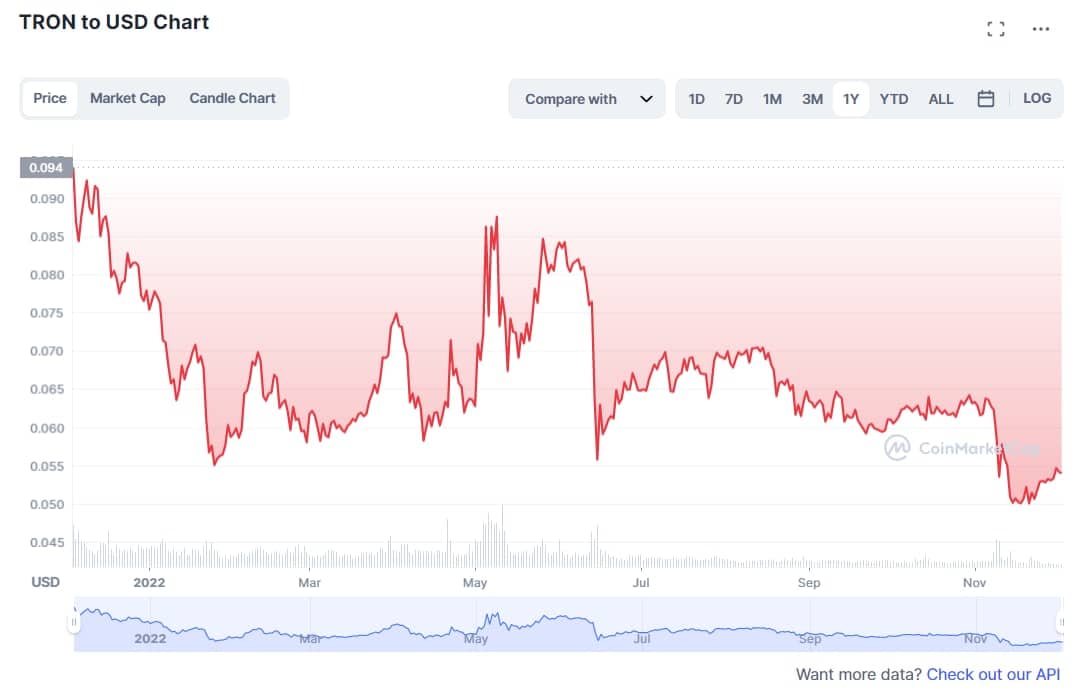 As seen, the TRX coin has printed lower lows over the past year with the most notable of its price slumps coming in the second half of the year.

Tron (TRX) Price Prediction  for 2023 and Markers of Growth

TRX is a digital currency that powers an established blockchain protocol in today’s fast-evolving industry. As a result, the digital currency will always be relevant. As we journey into 2023, here are the price levels that should be anticipated;

As seen, we expect TRX to print a very successful price growth throughout 2023. We understand that the macroeconomic headwinds that have continued to rock the digital currency ecosystem are still a major factor to watch out for, however, we believe in the resiliency of the TRX coin and that it will chart a good growth in the coming year.

Notably, Tron founder, Justin Sun is also known to be expanding the overall relevance of the Tron coin, a move he will be seeing come to pass with the protocol’s close integration with the Huobi Global exchange. While the Huobi trading platform has its own native token HT, we can expect some ingenious linkup that will further drive the adoption of TRX as well as the digital currencies within the Tron ecosystem.

We hope this information helps you plan your strategy right in the new year. Stay tuned for more updates on this timeline.

The Korean-based entity will take up a new name, and henceforth, operate independently from Huobi Global.

Press Release Cardano (ADA) and TRON (TRX) Are Doomed While Snowfall Protocol Sells Out Another Round of Presale!
By Kseniia Klichova January 9th, 2023

Crypto investing can be volatile. Experts all agree that Snowfall Protocol (SNW) is the least risky investment in the crypto space.

TRON founder Justin Sun had a sizable investment of $580 million with crypto manager Valkyrie back in August.