Alongside the new indexes that Cook Finance launched on Avalanche, a new feature dubbed Issue with Single Token has also been added.

Cook Finance, a Decentralized Finance (DeFi) platform unveiled the launch of its first-ever DeFi Index platform on Avalanche. As announced by the platform, users will now be able to select from as many as three unique indexes, most of which feature the most popular tokens in the Avalanche ecosystem.

The three AVAX focused indexes include the AVAX Ecosystem Index, which is composed of such tokens as WAVAX, TIME, JOE, QI, YAK, PNG, and PEFI. The second index is dubbed the AVAX Mega Cap Yield Farming Index and will integrate WBTC.e and WETH.e. and also feature a yield farming component facilitated through Yield Yak.

The third index is the AVAX Stablecoin Yield Farming Index that will be made up of USDT.e, USDC.e DAI.e, and MIM. This index will also be infused with a yield farming component through Yield Yak.

Though relatively new, the Avalanche ecosystem has been showcased as one of the fastest-growing layer-1 blockchain protocols around. While being tagged as an Ethereum-killer based on its unique features and growing ecosystem, Avalanche has proven to be the right cradle for the next generation DeFi and NFT startups respectively.

“Avalanche has experienced tremendous growth over the past month and we’re so excited to give the Avalanche community access to the first-ever DeFi Index platform. We see this launch as providing an easy way for new users who want to get into DeFi indexes but were held back by high gas fees on ETH,” says Adrian Peng, CEO of Cook Finance. “As we build out new community proposed features to make DeFi indexes even easier to access, we hope that launches like this help build the overall DeFi index ecosystem.” 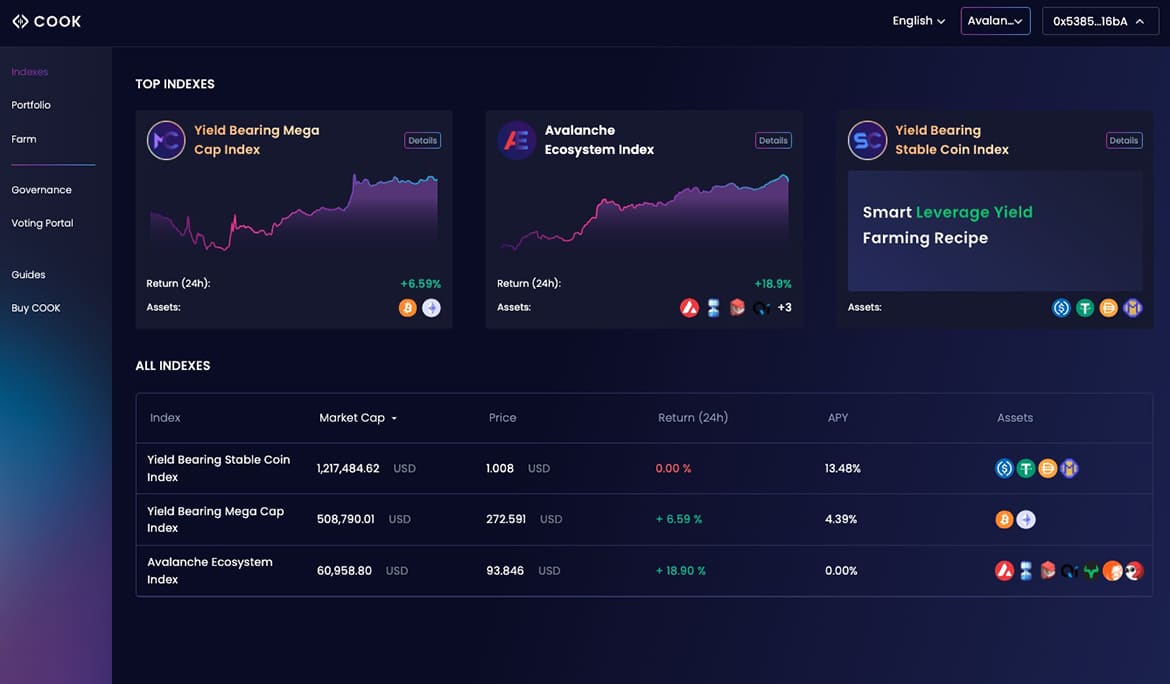 Alongside the new indexes that Cook Finance launched on Avalanche, a new feature dubbed Issue with Single Token has also been added. This feature makes issuing into an index as simple as swapping a single token such as AVAX, USDT, or WETH for all of the supported assets in an automatic manner. This feature will provide users with one of the fastest ways to issue into any DeFi index on the Cook platform.

The Cook Finance hub is designed as an easy-to-use outfit which in tandem promises a very high yield in terms of Annualized Percentage Yield. The platform is ideal for Index Selectors, serving as hubs where some of the most popular projects are featured. The platform is also suitable for Index Creators who through the platform’s self-instructive tools in the future will be able to create their own menu of DeFi strategies.

With a cross-chain reach, Cook enables a wide range of people on its platform and the Cook Finance team is keen on its future growth through continual development.

Related Articles
Press Release 3 Crypto Projects That Could Explode Between 2022 and 2025
By Kseniia Klichova June 27th, 2022

The cryptocurrency market is continuously expanding. Today it is a sector where a vast collection of cryptos, NFTs, virtual reality games, and other digital assets are created, held, bought, and sold.

Press Release Will FIREPIN (FRPN) Become as Successful as Avalanche (AVAX)? What You Need to Know About This Upcoming DeFi Token
By Kseniia Klichova June 25th, 2022

Decentralized Finance (DeFi) has taken the cryptocurrency market by storm. It seeks to reduce or eliminate third-party control in transactions.

With the current delicate nature of the digital currency ecosystem, Solend is doing all it can to pacify all of its stakeholders while dealing with a liquidation threat from a whale account.