The market has not reversed at a full scale yet. What is more, the bears still control it, and the assets keep declining after a small correction.

On all the assets discussed below, reversal patterns are forming on the smaller timeframes. If the bulls manage to push the quotations above the nearest resistance levels, we can expect the beginning of good growth. For the Bitcoin, it is enough to secure above $7700, which may provoke growth to $10000. Such growth of the leading digital asset may pull the rest of the altcoins after it, as they also look ready for the development of an ascending impulse.

On D1, the quotations have pushed off the upper border of the Bollinger Bands indicator which signifies bearish pressure preserve. As the main trading idea, we should expect a decline to the support level of $6800 and the beginning of growth with the potential aim at $9800. This idea will be additionally supported by a test of the ascending trendline on the RSI. The growth will be confirmed by a breakout of the upper border of the descending channel and securing above $8355. A breakout of $5890 will cancel the scenario, in which case the asset will keep declining. 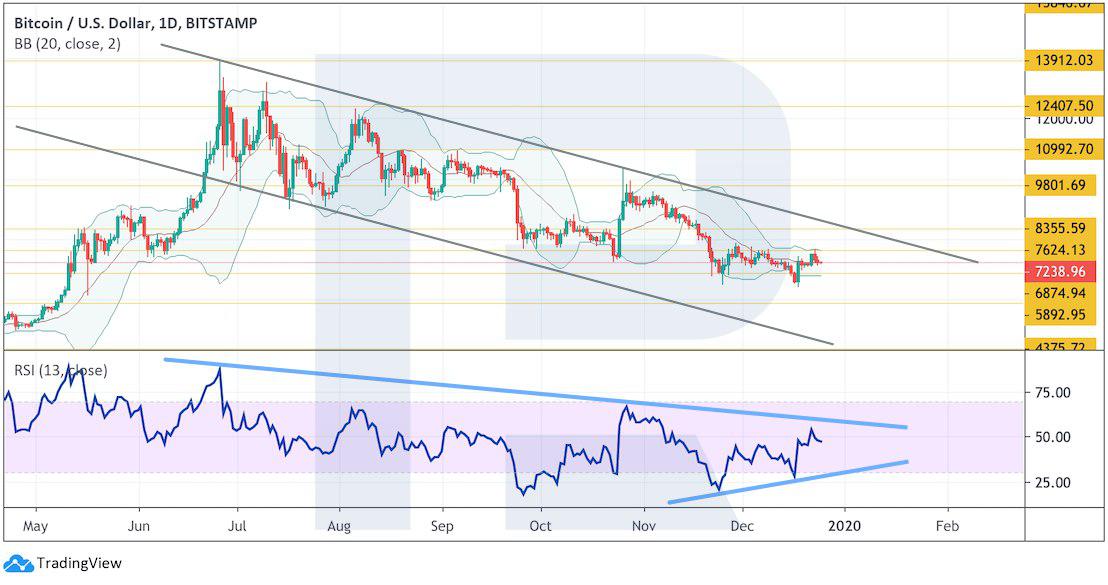 On H4, there is potential for a reversal pattern “Inverted Head and Shoulders” to form. The right shoulder must be completed near $6875. The completion of the pattern and the beginning of growth will be confirmed by securing above $7625, which will mean a breakout of the neck. The scenario may no longer be valid if the crypto asset falls below $6500 and keeps falling with the aim of $4650. 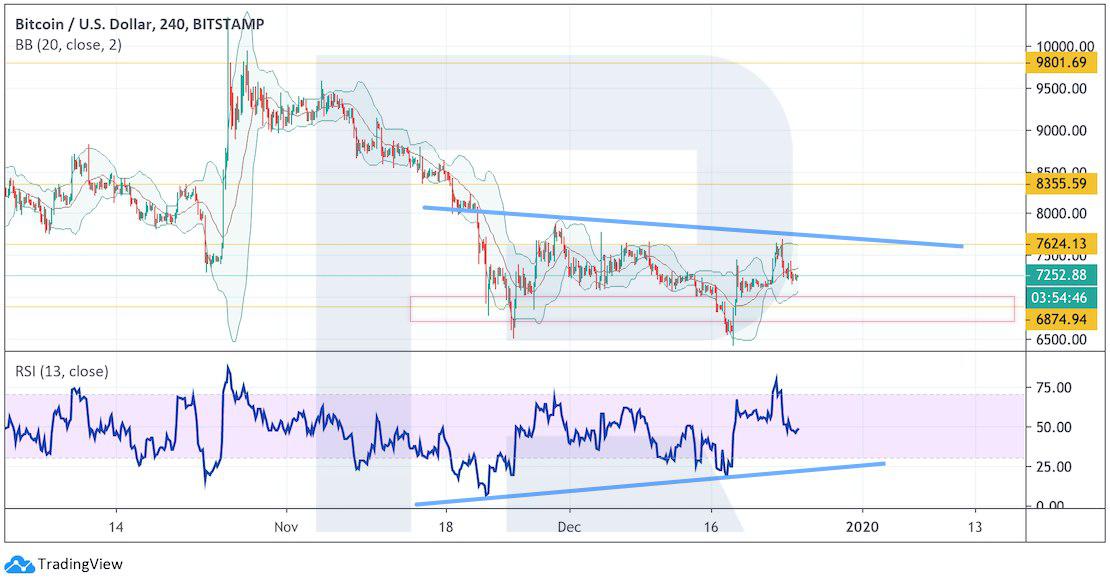 On D1, the quotations remain in the descending channel. As we see, the RSI values linger to the support level, and then the prices demonstrate a bounce. However, the buyers are not strong enough to secure above the Moving Averages, which still signifies a downtrend. As the mid-term trading idea, we should expect a test of $100 and the beginning of the growth of the asset. The uptrend may be confirmed by securing above $157, which will mean an escape from the descending channel. A breakout of the area near $100 may provoke further falling. 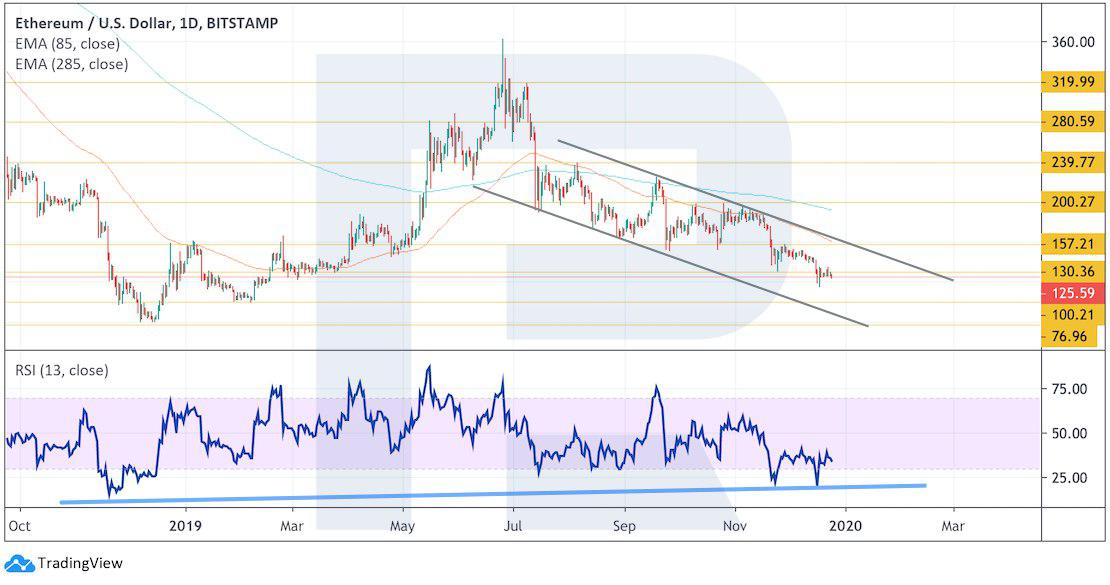 On H4, the quotations are squeezed in a Wedge. In most cases, this pattern signals a reversal, which will be confirmed by a breakout of the upper border of the pattern and securing above $135. In this case, only we can expect growth with the potential aim at $200. The growth may be canceled by falling below $100, which will cancel the Wedge and mean further falling. 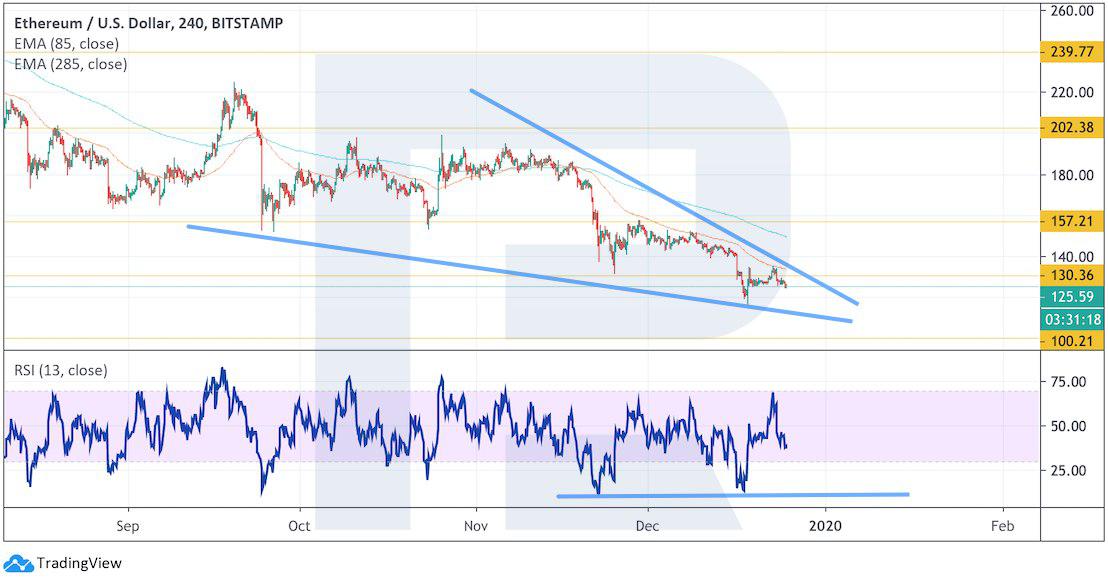 The quotations remain under the Ichimoku Cloud, which still signifies a bearish trend. After another test of the support line on the RSI, the price bounced up but still has not broken out the upper border of the descending channel. Another falling to $2.40 is not to be excluded, after which the growth might follow. The rise will be confirmed by a breakout of the upper border of the Cloud and securing above $3.30. 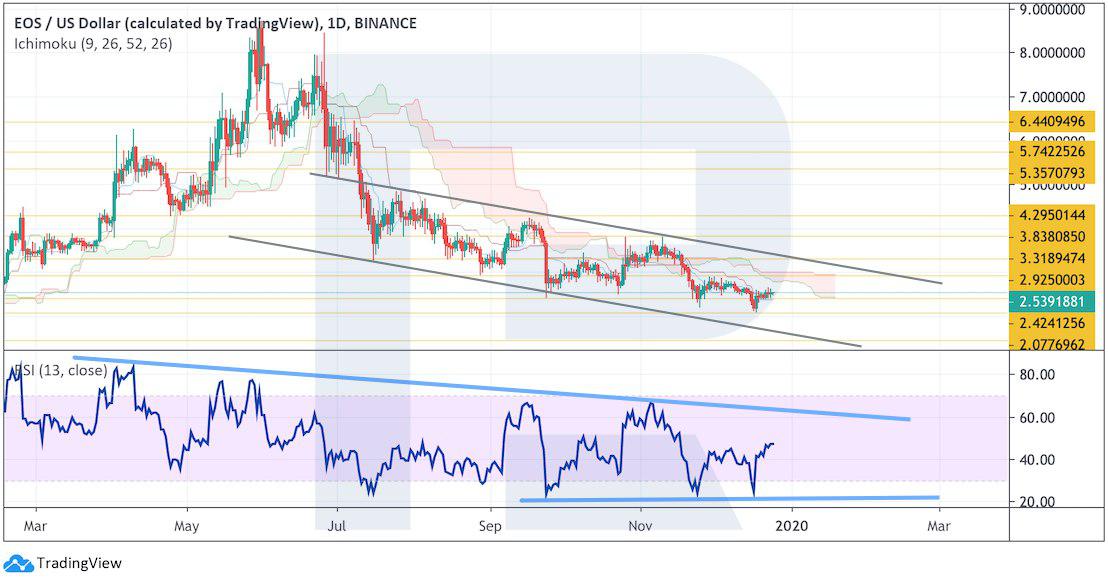 On H4, the currency seems more ready for growth. A bullish Wolfe Wave is complete. The aim of the execution of the pattern is $3.30. The quotations are also above the upper border of the Cloud, which means a mid-term uptrend. The scenario may no longer be valid if the price falls below $2.07, which will mean the renewal of the descending impulse and further decline. 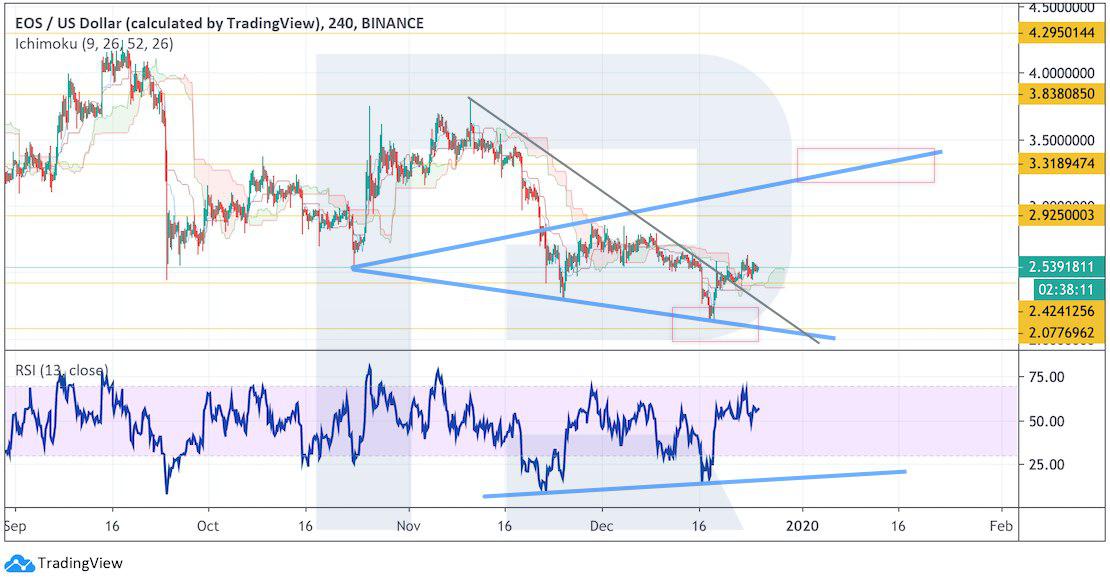 On D1, the quotations keep declining. The descending impulse remains quite strong. A reversal might start only with securing above $55, which will mean an escape from the descending channel. As a short-term idea, we should expect a test of $40 before the beginning of growth. The idea is confirmed by a test of the support line on the RSI; earlier, the prices demonstrated bounces upwards after such tests. 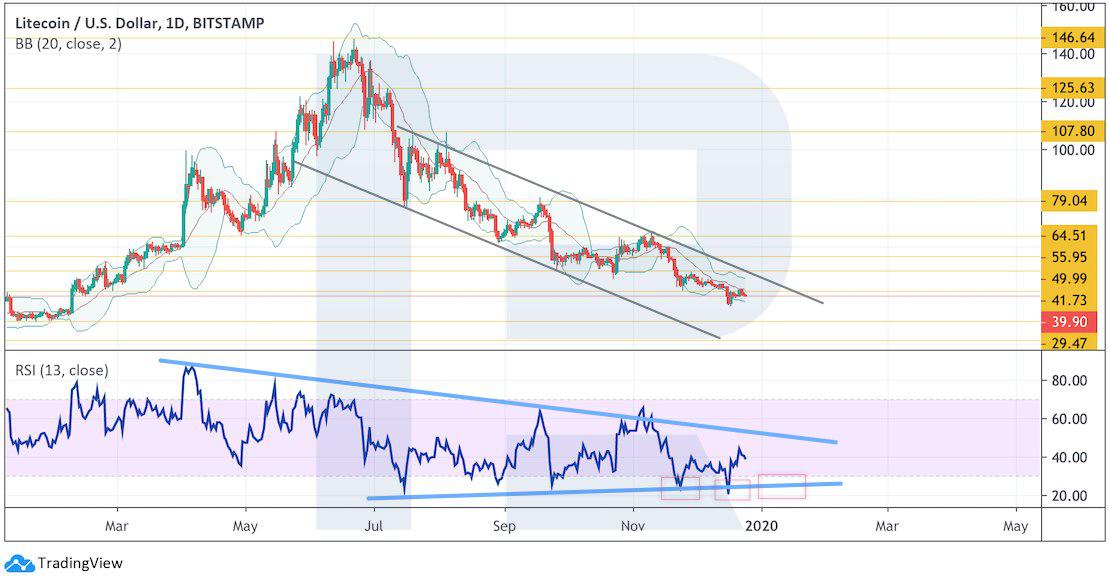 On H4, the quotations are squeezed in a Wedge. For the beginning of growth, we should wait for the upper border of this pattern to be broken away and the quotations secure above $50. However, a test of the lower border of the pattern before the growth is also possible here. Yet another signal will be a bounce off the trendline on the RSI. The scenario may be canceled by falling below $40, which will mean further falling to $35. 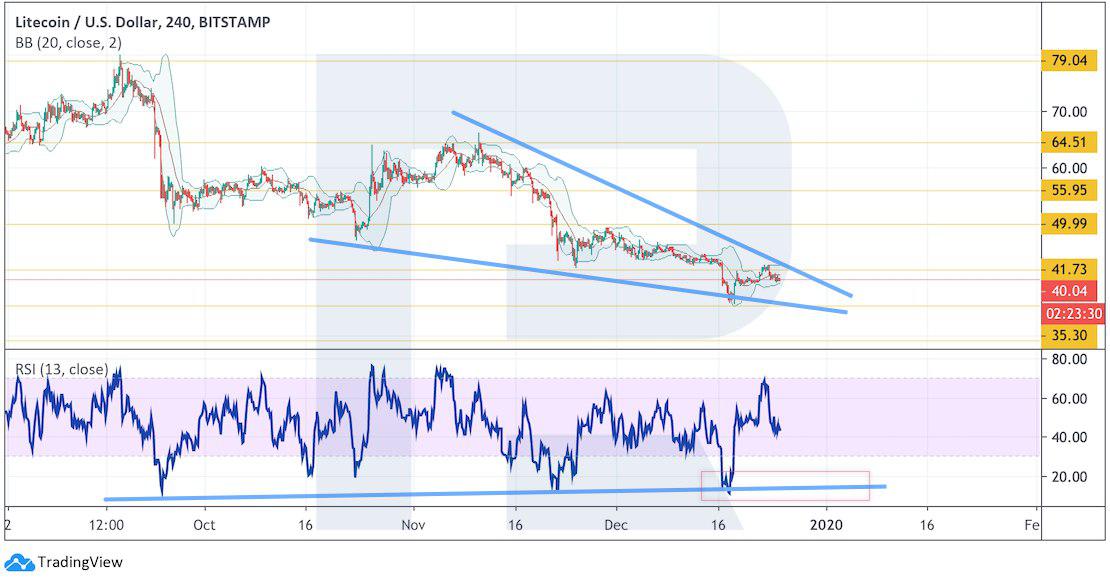 On D1, the currency keeps declining inside a descending channel. The RSI values have bounced off the trendline but the bulls are not strong enough to push the prices out of the channel. Another attempt of falling and a test of $160 is not to be excluded, from where we should expect a rise with the aim at $265. The growth will be canceled by a breakout of the support level and securing under $150, in which case the decline will go on. 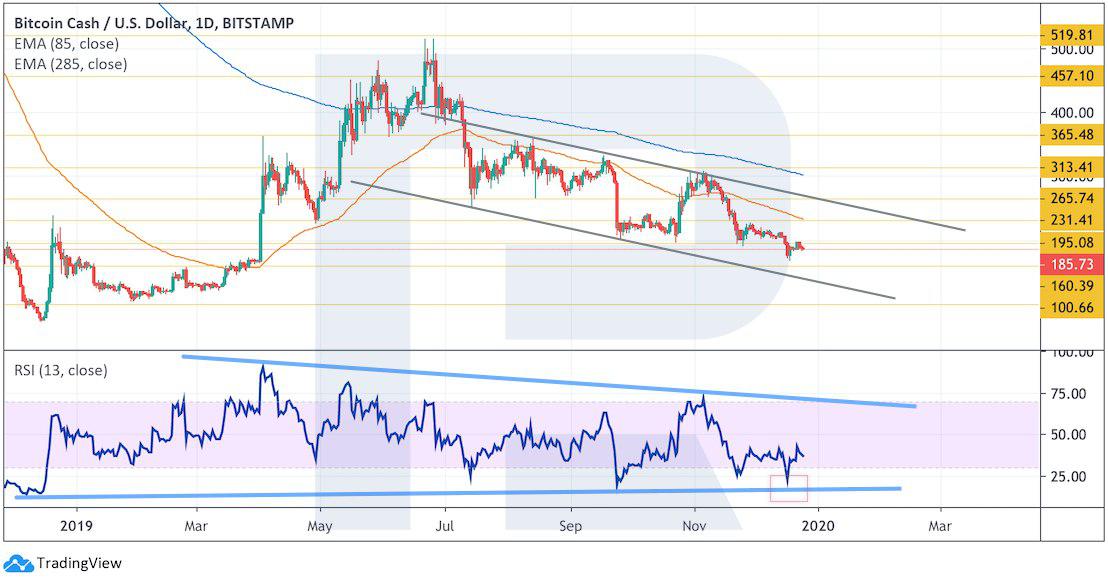 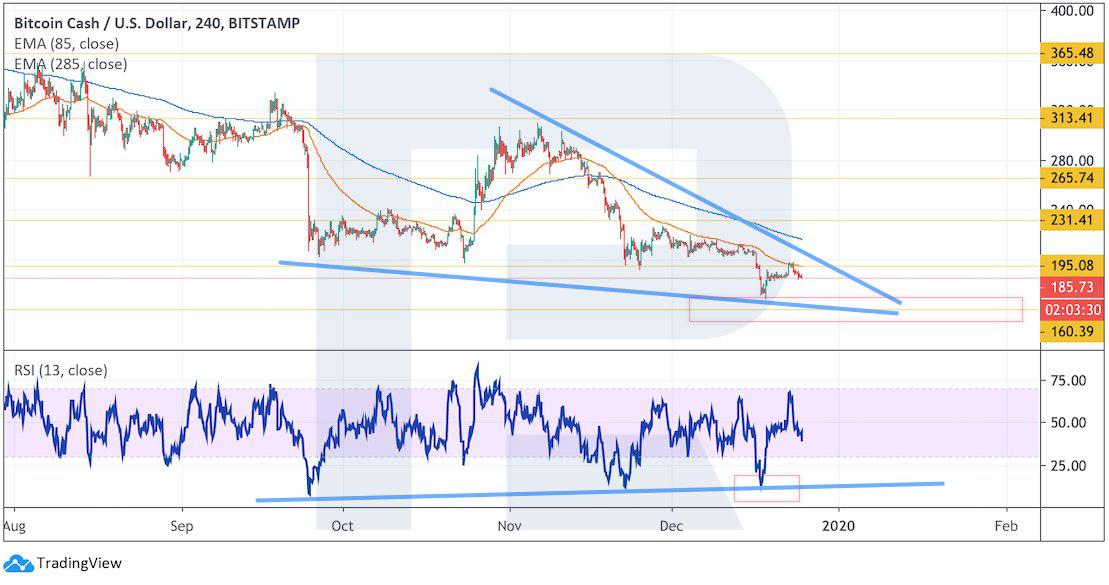