A senior analyst at RoboForex shares his insights into the future scenarios for Bitcoin, Ethereum, EOS, Bitcoin Cash and Litecoin price movement.

Cryptocurrencies keep growing after a small correction but the buyers have yet failed to break out the key resistance levels. That is why another bearish attempt to develop a descending correction is not to be excluded without a renewal of the local minimums, and only after that the prices of the digital assets may start growing. What is more, at the moment of correction, on several cryptocurrencies, reversal patterns might form, which will serve as trustworthy signals for market entry with minimal risks. At the same time, the bullish pressure is so strong that the prices may go on growing from the current levels. In any case, regardless of various variants of further events, all cryptocurrencies have a high potential for further growth. As for the Bitcoin, the nearest goal of the growth may be at $12965.

On D1, the Bitcoin has managed to escape from the descending channel. However, for the bulls, it is important to get over $9800 so that we could speak about the beginning of full-scale growth of the digital asset. The uptrend is supported by the Moving Averages that have nearly crossed. As the main trading idea, we should expect a test of the broken border of the channel near $8355, and after that – further growth with the first aim at $10995. Yet another signal confirming this movement will be a bounce off the trendline on the RSI, where the previous test provoked growth. At the same time, we should not exclude further development of the inverted Head and Shoulders pattern. In this case, the declining of the quotations may first reach $7625, and only later full-scale growth may begin. The final goal of this pattern is the area near $12965. The option, positive for the bulls, may no longer be valid if the price declines and secures under $6800, which will mean the pattern has stopped forming and the falling will continue with the potential aim near $4375. 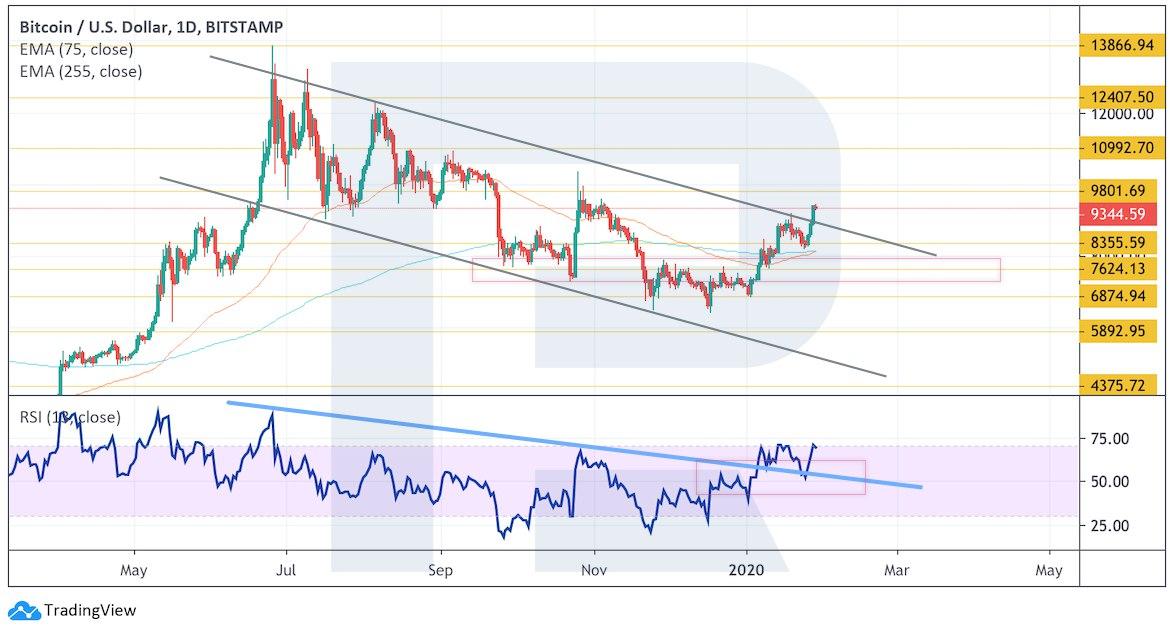 On H4, the price keeps moving in an impulse of growth. As we may see, the quotations have bounced off the upper border of the descending channel. Further growth to the width of the previously broken channel is not to be excluded, after which a test of $10995 may happen. The MAs also point at a bullish trend, promising a bounce upwards after a test of the area between the MAs. The scenario may no longer be valid if the price falls below $7625, which will mean it is aiming at $6875. 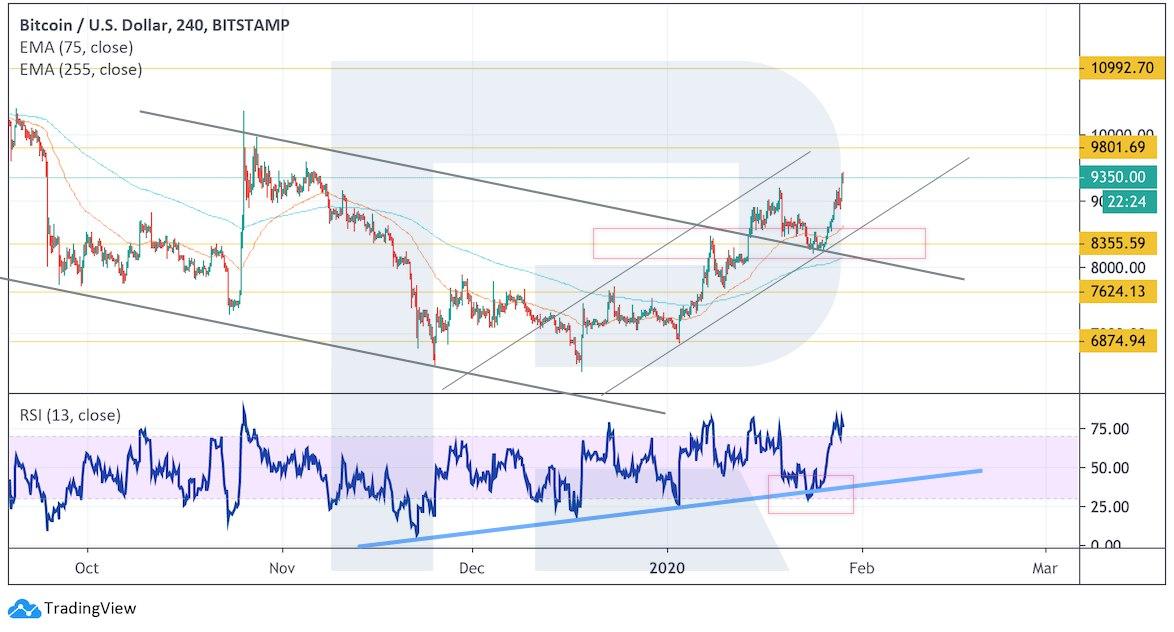 On D1, the cryptocurrency is testing the resistance area near $180. For the buyers, it is important to secure above $200. Currently, there is a risk that the quotations will fall and test $156. The RSI values have again broken the resistance line but remain near the overbought area, which may provoke a correction. The scenario may be canceled by falling and securing below $138, which will mean a breakout of the lower border of the Ichimoku Cloud. In this case, we should expect further falling to $117. 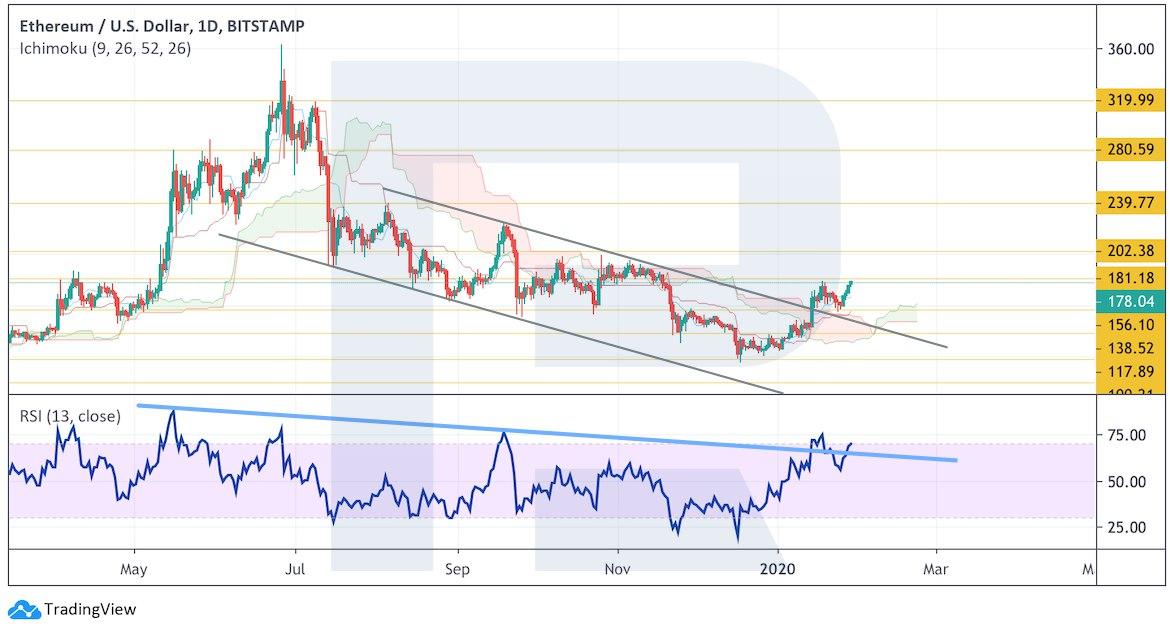 On H4, the price is above the indicator Cloud, which means a bullish impulse. A good signal confirming further growth may be a bounce off the upper border of the descending channel. However, here as well we can see a test of the overbought area on the RSI, which suggests a bounce downwards and the development of a bullish trend. The scenario of growth may no longer be valid if the quotations decline and secure below $156. In this case, we may speak about a deeper falling, and the structure that emerges may be called a Double Bottom. 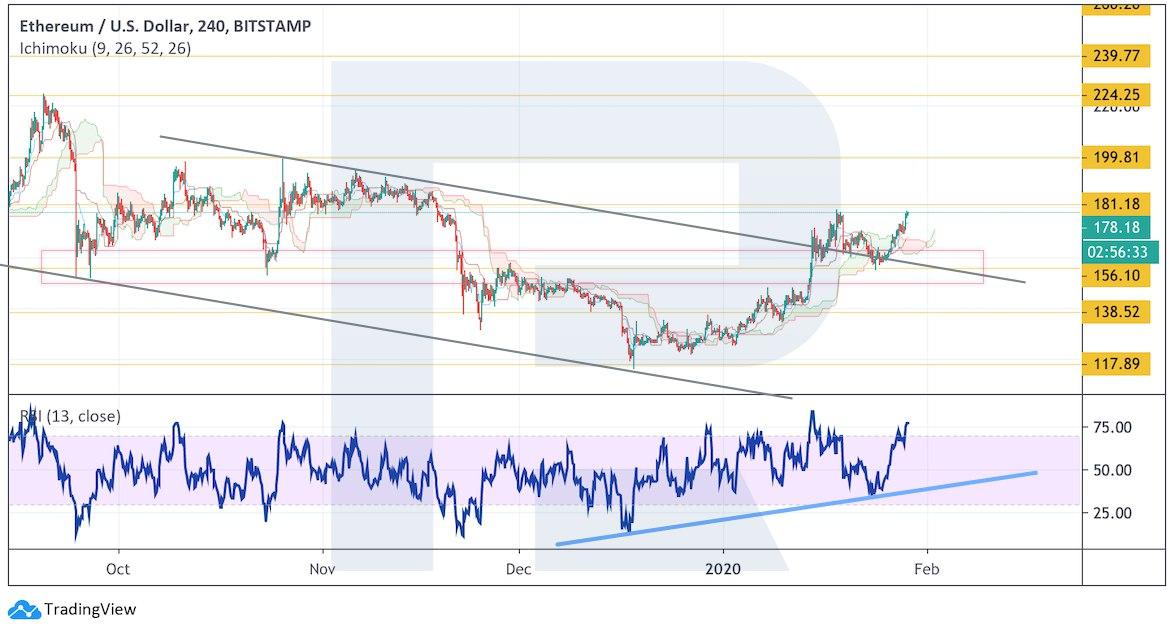 The EOS quotations have managed to bounce off the middle line of the Bollinger Bands indicator, which points at pressure from the buyers and a bullish impulse. An important support area is at $3.83, and its breakout will mean further falling to $2.95. As a short-term trading idea, we should expect further growth with the potential aim at $5.74. Yet another signal confirming this scenario may be a bounce off the support line on the RSI. On the whole, further development of the bullish trend may be confirmed by a breakout of the upper border of the descending channel and securing above $6.96, which will mean confident growth of the asset. 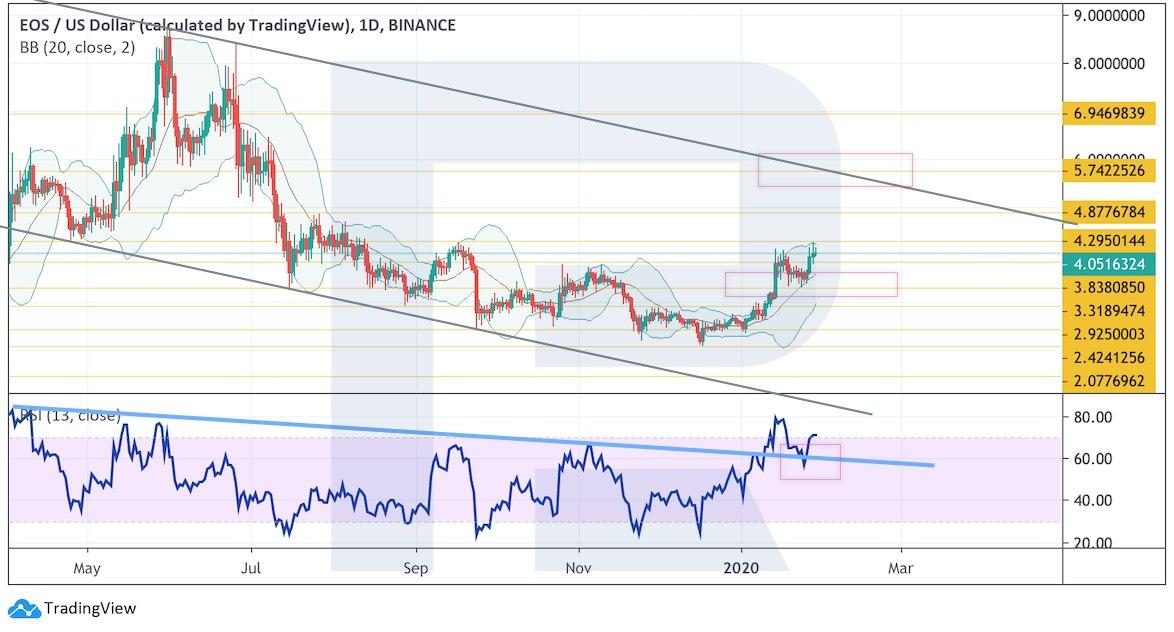 On smaller timeframes, we can also see a bounce off the upper border of the descending channel. Currently, the quotations are testing the resistance area near $4.29. To continue the growth, it is important for the bulls to break out the resistance level. Further growth will be also confirmed by a bounce of the price off the support line on the RSI. The scenario, positive for the buyers, will be canceled by a breakout of the support line and securing under $3.31, which will mean potential decline to $2.42. 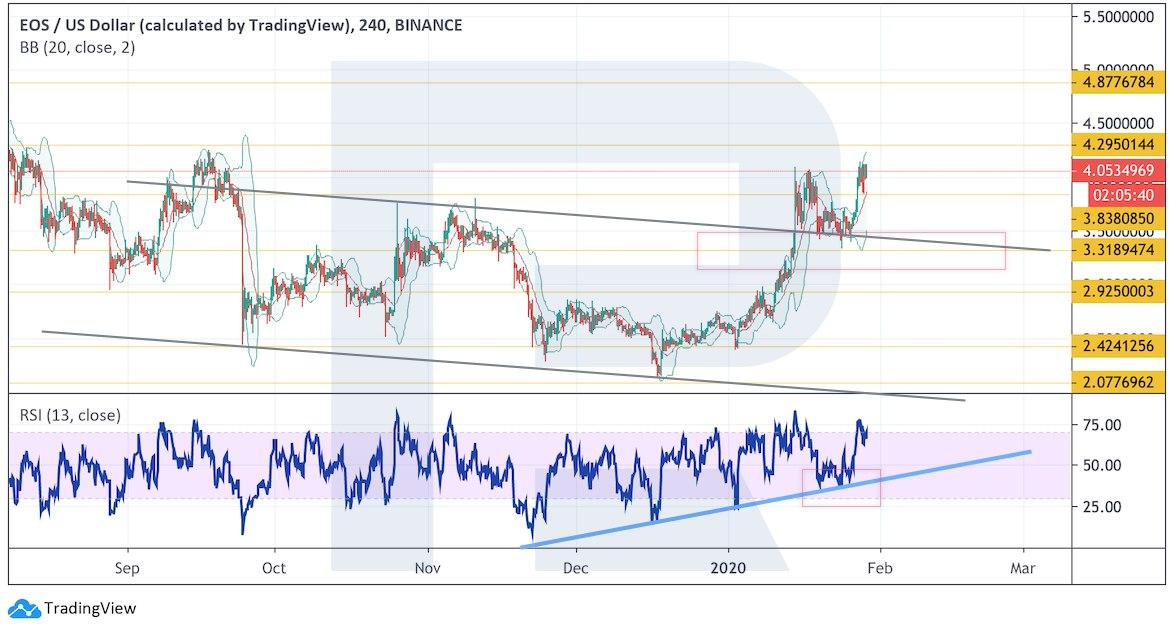 On D1, the quotations have also shown a bounce off the support area, which means the bulls are strong. The price has broken through the MAs upwards, which forecasts a soon change of the decline for a bullish trend. It is not excluded that the buyers will manage to push the price from the current levels to $457, where the upper border of the descending channel lies. With a breakout of this area and securing above $519, we will be able to speak about full-scale growth of the cryptocurrency. The growth might be canceled by a decline and a breakout of $265, in which case the aim of the decline will be at the lower border of the descending channel. 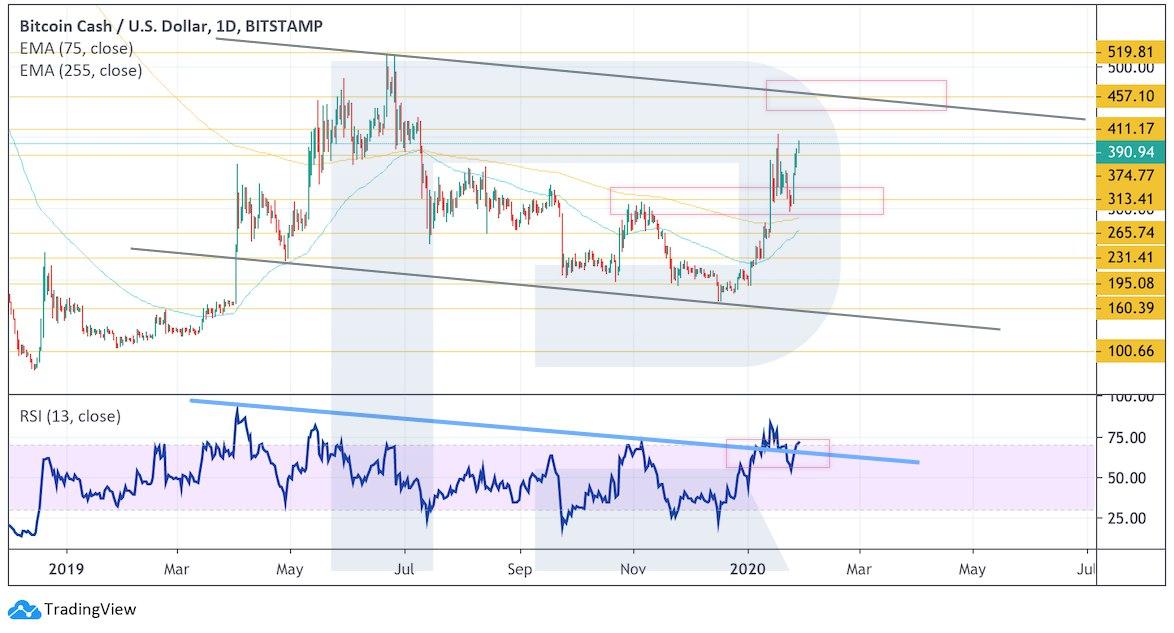 On H4, the price has escaped the channel. Here, we can also see a bounce off the area between the signal lines, which means presence of an ascending impulse. With a breakout of the resistance level and securing above $411, we should expect further growth with the first aim at $457. A good signal confirming further development of the ascending impulse will be a bounce off the trendline on the RSI, which happened several times before. 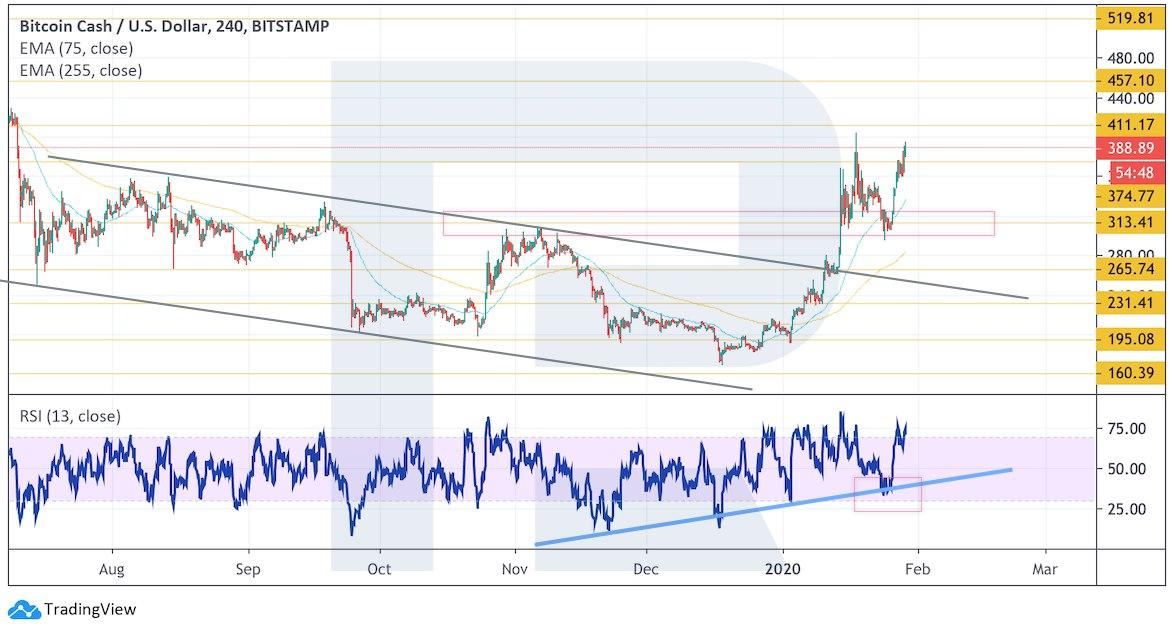 On D1, the Litecoin quotations keep testing an important resistance area. On the one hand, we can speak about the price falling to $56 and a reversal Head and Shoulders pattern beginning to form; on the other hand, we cannot exclude growth from the current levels to $79. Further growth is supported by a bounce off the trendline on the RSI. The idea will also be confirmed by a breakout of the resistance area and securing above $65. The scenario may be canceled by falling below $42, which will also mean the reversal pattern has stopped forming, and the price will decline to $35. 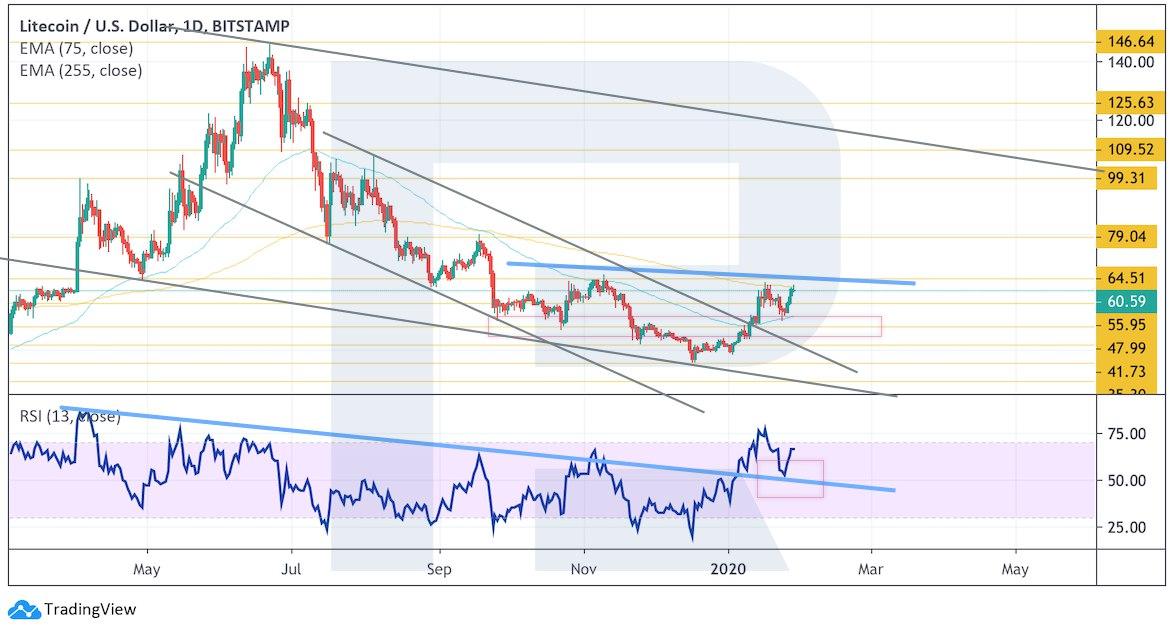 On H4, the price keeps growing inside the channel. The quotations have pushed off the area between the MAs, which means pressure from the buyers. We should expect further growth and a bullish trend to form. An important signal confirming growth will be also a bounce off the support line on the RSI, where earlier, in similar situations, we saw strong price growth. The scenario, positive for he bulls, will be canceled by falling of the quotations below $50, which will signal a reversal Double Bottom pattern forming and further decline of the price to the aim at $44. 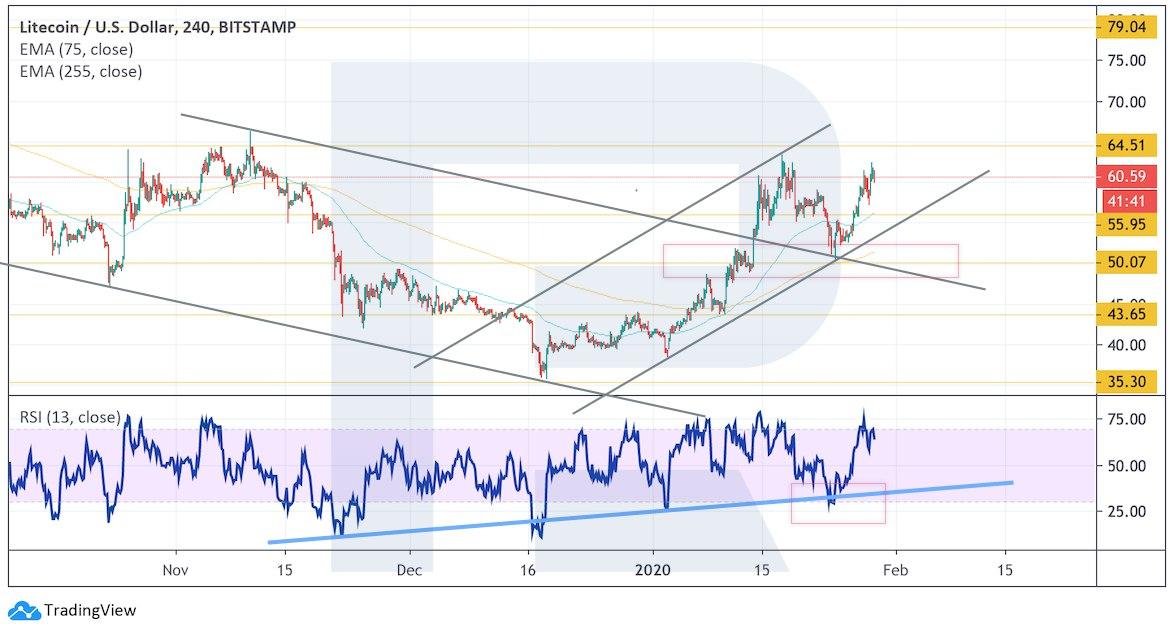 As the largest DEX platform on the Ethereum blockchain, Uniswap commands as much as $2.36 billion in the total value of assets in the Dapp’s smart contracts, allowing users anywhere in the world to trade crypto without an intermediary.

Open-sourcing of the STARK Prover technology will lead to greater developer participation and community collaborations for building dApps on the platform.