Stakeholders in the crypto ecosystem notably injected funds into keeping the candidates of their choice seen in these midterm elections.

Election polls closed on Tuesday in the United States ending months of campaigns toward the midterm elections by the duo of Republicans and Democrats for both House and Senate controls. As it stands, the race for the control of either chamber of the legislature remains too close to call, but one thing is certain, the expectation of a landslide victory from the Republicans has been dashed by sudden impressive performances from the contesting Democrats.

“While many races remain too close to call, it is clear that House Democratic members and candidates are strongly outperforming expectations across the country,” House Speaker Nancy Pelosi, D-Calif., said in a statement.

It still remains unclear whether the statement from Pelosi will imply the Democrats will keep control of the House they have led since the COVID-19 pandemic. Republicans are fighting equally as hard with the House Minority Leader Kevin McCarthy, R-Calif., declaring that “It is clear that we are going to take the House back.”

The cryptocurrency ecosystem has shown a lot of interest in the governance and politics of the United States with significant support being pulled for crypto-savvy candidates across party lines. The industry is clamoring for sweeping regulation for the industry, a move that can only be fast-tracked when candidates with vested interests dominate each chamber of the legislature.

“The recent events show the necessity of Congressional action. It’s imperative that Congress establish a framework that ensures Americans have adequate protections while also allowing innovation to thrive here in the U.S.,” said Rep. Patrick McHenry, R-N.C., the current top Republican on the House Financial Services Committee, in a statement released Tuesday.

Stakeholders in the crypto ecosystem notably injected funds into keeping the candidates of their choice seen in these midterm elections.

Many in the industry opened Political Action Committees (PACs) and Super PACs through which they bankrolled the candidates whose agenda aligns with the general growth track and expectations of the industry.

Crypto billionaire Peter Thiel was a prominent donor to the GOP this election cycle, bankrolling Republican Blake Masters in the race for the Senate Seat in Arizona. Despite his funding, most of which was raised using cryptocurrency, Masters is behind Democrat Mark Kelly by 52.1% to 45.7% of the 62% of the votes counted.

For the Senate seat, current data at the time of writing shows Republicans have 47 seats while Democrats have 46 seats. To gain control of that Chamber which will see Republicans lead some of the key committees, about 51 of the seats are needed to be called the Majority. 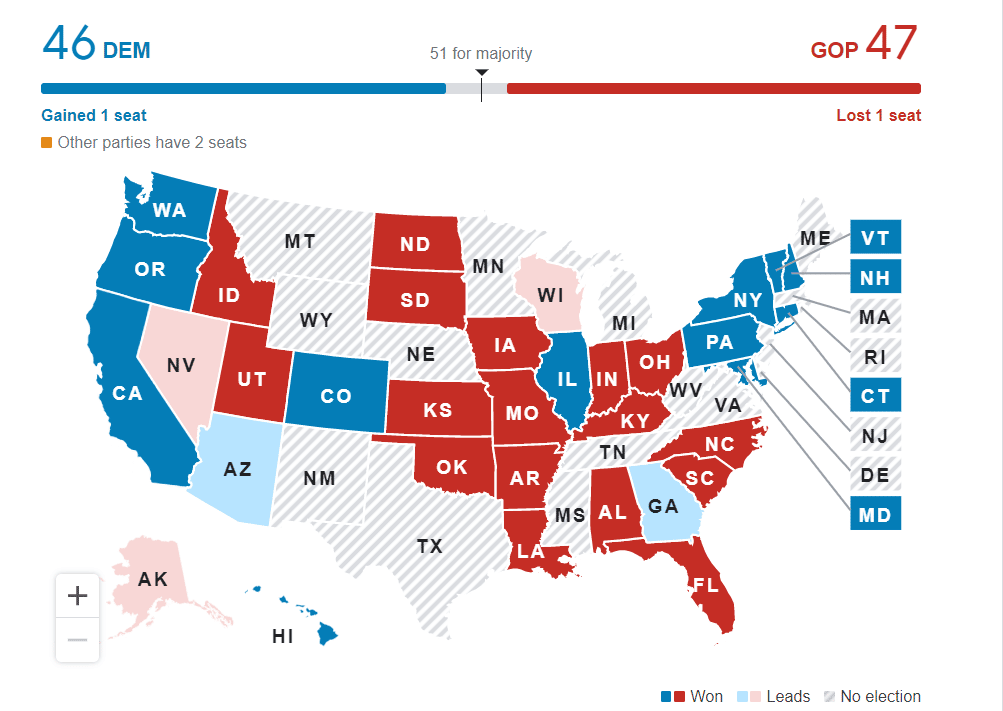 Coupled with the uncertainty in the crypto ecosystem at this time, digital currencies are pricing in the uncertain events with tapered prices. Bitcoin is down 12.06% to $17,387 with the combined market cap slumping to $861.28 billion, down by 12.47% over the past 24 hours per data from CoinMarketCap.