This year the cryptocurrency market is seriously affected by the bearish trend. While experts and the crypto community are trying to predict what will happen next, crypto investors should find and apply the strategies most suitable for bear market.

In the decade since the introduction of Bitcoin, it has been a rollercoaster of a ride for cryptocurrency investors – especially after the start of the bull run late in 2017. There have been thrills and spills, and more ups than downs across the 10 years. Certainly, those who were clever – or lucky – enough to invest in the early days will be very pleased with their yield.

Much like a rollercoaster, following a steep ascent comes an exhilarating – sometimes scary – drop, and that has been the case for Bitcoin and the other major cryptos in 2018.

There is talk of another bull run on the horizon, though whether it will happen is anyone’s guess. So what strategies do crypto investors employ in a bear market? Basically, you have four options – as listed below. Choose wisely.

“Shorting” is when a trader backs a certain market to decline. If their hunch is correct, then they will benefit. Arguably the most famous example of short selling happened in September 1992, when Hungarian-American investor George Soros netted approximately $1 billion after correctly predicting the British pound would drop when it was forced out of the European Exchange Rate Mechanism.

Shorting is made possible through Contracts For Difference (CFDs), or derivatives, as they allow the trader to sell assets he or she doesn’t actually own. Simply put, a short trade is executed when a borrowed asset, or instrument, is sold at the current market price. If the market moves the trader’s way thereafter, and the price of the asset declines, the value of their position increases. From there the trader can choose to buy back the now-cheaper asset and make a tidy profit.

The 1,200 instruments offered by leading global social trading and investing platform eToro to its 10 million+ members have the option to short, including within the cryptocurrency and stock markets. Never has the adage “one man’s loss is another man’s gain” been so apt.

The first time you see “HODL” when someone is discussing cryptocurrencies the word causes you to stop reading. You think: “Is it a misspelling?” Well, yes it is – at least it was mistyped originally. Now, rather amusingly, HODL has spawned a life of its own. It has evolved to represent a long-term trading strategy and philosophy for crypto investors.

HODL has become an acronym (or even backronym) for “hold on for dear life”, meaning that even when investors are in the deep red with their cryptos they should not buckle under pressure and sell, driven by the belief that they will, ultimately, reap great rewards, once mass adoption has been achieved.

Quartz heralded HODL as one of the most important terms in crypto culture in 2017, describing it as a determination to “stay invested in bitcoin and not to capitulate in the face of plunging prices”.

There is certainly great potential of HODLing as an investment strategy, and not selling while under pressure, as history shows us – and not just in the cryptocurrency world.

One of the most notorious examples of failing to HODL happened in the mid 1970s when Ronald Wayne, Apple’s third co-founder – alongside Steve Jobs and Steve Wozniak – sold his 10 percent stake in the then-start-up back to the other two co-founders for $800.

In August 2018, Apple achieved the historic milestone of reaching a market capitalization of $1 trillion. Had Wayne adopted a HODL mentality his Apple stake would be worth around $100 billion today.

It is impossible to predict the future, but Jay Smith, one of eToro’s most recognizable Popular Investors (whose trades can be copied by others – as can anyone’s on the platform), believes staying strong will reap the biggest rewards. Full-time trader Smith – a.k.a. jaynemesis on eToro – describes his trading style as “fundamentals, future, and HODLing”.

“I firmly believe that cryptos will change the world, replacing stock markets, most currencies and powering everything from machine-to-machine payments and the Internet of Things through to streaming media, prediction markets, governance systems, voting systems, even potentially the internet,” he continues. “That being said, there is a long way to go, we are in the very early stages for most of these areas.”

When the value of cryptos falls, many investors double down – effectively strengthening their commitment to a course of action that is potentially risky – because the prices are so low. As with HODLers, those who keep investing see the long-term benefits of cryptos.

Despite the bear market of 2018, many eToro users have invested more in Bitcoin, XRP, and a range of other cryptos available on the platform – just see the market sentiment (image taken on November 30, 2018). 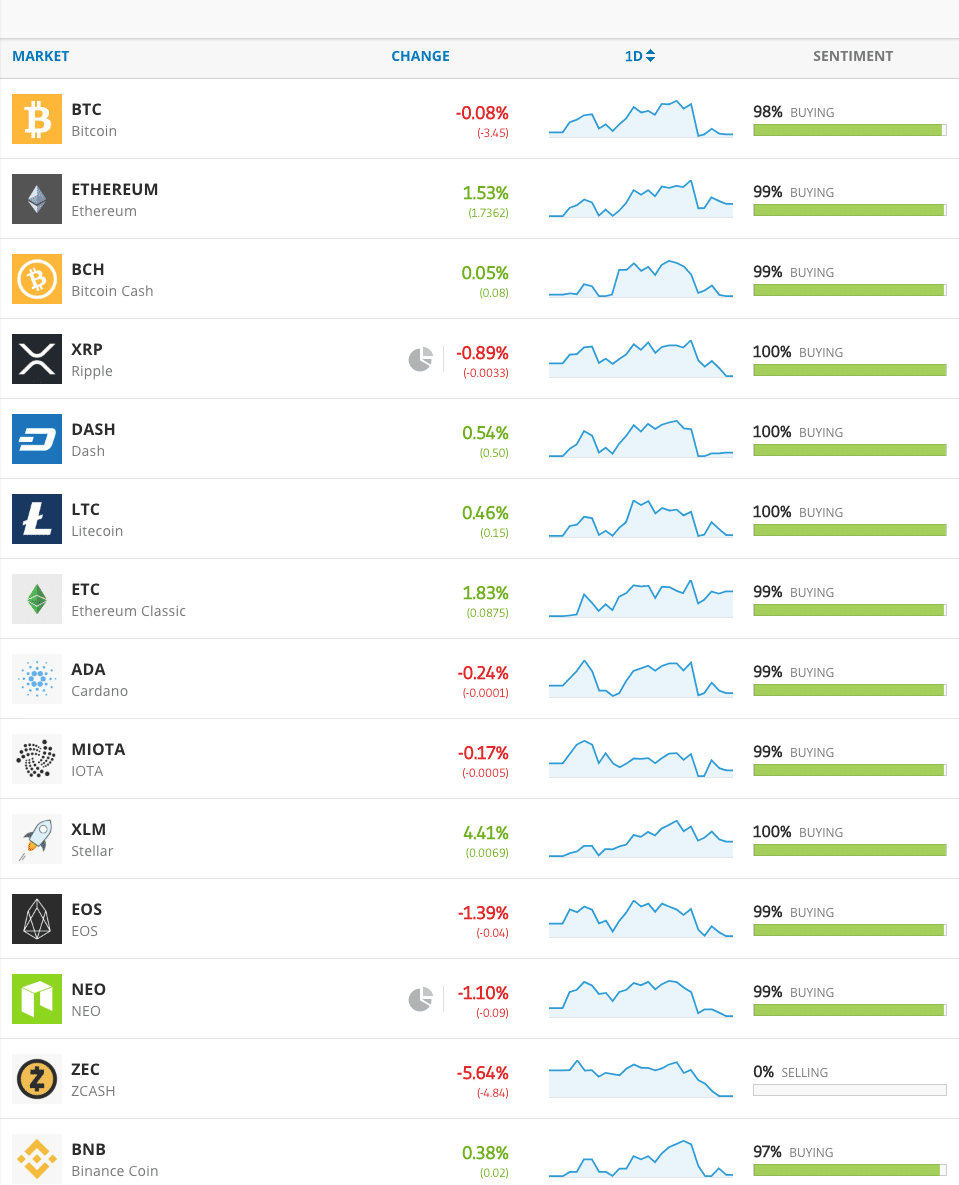 If you have gone all in on cryptos and are waiting for the arrows to turn green, rather than red, it might be a good idea, during a bear market, to consider investing in other asset classes. By diversifying your portfolio this approach will spread your overall risk.

On eToro there are over 1,200 financial instruments, across six asset classes, on offer: cryptocurrencies; exchange-traded funds (ETFs); stocks; indices; commodities; and currencies. There are other ways for users to invest with eToro, in addition to manual trading. The innovative CopyTrader tool allows clients to copy the trades of top investors automatically. Users can view and copy anyone with a profile in a straightforward way, and expand their portfolio using CopyTrader while still using an individual strategy.

Another option is CopyPortfolios™: eToro offer various portfolios including in cryptos, technology, and the best-performing traders. These allow users to invest in multiple markets or traders based on predetermined investment strategies.

The award-winning platform truly is a one-stop shop for all your trading needs in a crypto bear market.

Chainlink’s popularity remains on a rise in the Decentralized Finance (DeFi) space. The price of the LINK cryptocurrency has surged over 225% since the beginning of 2020.

The biggest upgrade to the Cardano blockchain is due to begin rolling out today with the release of the “Shelley” code. The upgrade will make the blockchain more decentralized and scalable.

Wall Street Indices Rise on Monday Thanks to Apple and Microsoft

Microsoft and TikTok Confirm Acquisition Talks, Deal to Be Concluded by September 15