While both degen trading and social trading don’t require much skill, they’re not exactly the same. Degen trading is, at its core, completely random.

As trading becomes ever more popular around the globe, new trends keep cropping up. While social trading is very much a trend established in the 2010s, 2020 and 2021 saw the rise of a new form of trader: the Degen Trader

Still a very new term, a degen trader most likely comes from communities like Reddit’s R/WallStreetBets, which frequently refer to themselves as degenerates. This trading style is one of the most recent developments in trading, with a singular tactic at its core.

Quite simply, degen traders follow one rule – never to research. They act with impulse, buying whichever stock they want, at whatever price, at whatever time, simply because they can. This random form of betting has seen some incredible returns and equally devastating losses.

But, considering that nearly 90% of investment bankers don’t even beat the stock exchange’s S&P 500 (something they’re paid to do, we might add), it doesn’t seem like there’s much to lose with taking a little risk.

In this article, we’ll be discussing two recent trends in trading, social trading and degen trading, outlining the main differences between them. Let’s get right into it.

What Is a Degen Trader?

A term that’s very much grounded in the Reddit sphere of WallStreetBets and its wild 2021 trading year, a degen trader is someone who doesn’t care about metrics. While investment bankers will look at the leadership behind a stock, past charts, debt-to-equity ratio, and a whole range of other metrics, the only thing that matters to a degen trader is red or green.

A degen trader will buy stocks at random without doing any preliminary research into the fundamentals. Instead of spending time assessing if the stock is a good investment, a degen trader places all their money on luck and hits ‘Buy’ on anything they’d like.

If a stock ends up in the red, too bad. But, if the stock ends up the green, then the degen trader has triumphed. This illogical form of trading might be ringing alarm bells for some of you. However, considering that 98/100 monkeys throwing darts at a wall of stocks managed to beat the S&P 500, it seems that stock trading is really just a game of luck anyway.

What Is Social Trading?

Social trading, also known as copy trading, is the action of following the trades of a more experienced trader. Instead of making your own traders, you’ll often pay a small fee and then be allowed to automatically copy the actions of a professional.

This comes as an alternative to investing with large hedge funds, with social trading providing users the opportunity to access people’s advanced experience for a fraction of the price. In recent years, platforms like eToro and NAGA have made social trading incredibly popular, with solid returns and a community feel at its heart. 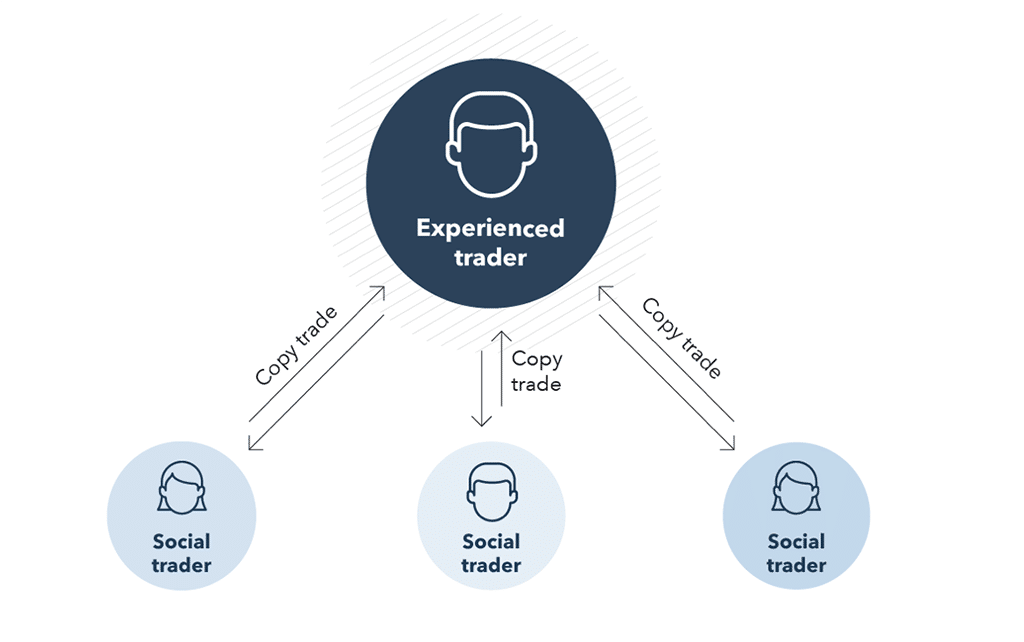 What Are the Main Differences between Degen Trading and Social Trading?

Although these two forms of trading bear some similarities, primarily the off-hands approach to trading, they are far more different than similar. Three main differences significantly set these two strategies apart:

Let’s break these down further.

When a degen trader purchases an asset, they do so fairly randomly. Without looking at financial histories, trends in earnings, debt-to-equity ratios, or the team behind the company, they just hit the buy button and carry on. Whether they like a stock because they’ve heard it come up in the news or just because they like the logo, there isn’t really any rhyme or reason to their actions.

While social traders also don’t have to think about the stocks that they buy, as they are automatically traded, this is because they’re following the trades of an experienced trader. Social trading is founded on pathways of following someone that actually knows what they’re doing.

Commonly, trading platforms that offer social trading will also publish the returns rates of certain traders. This is especially the case on NAGA, which shows who the top traders of the week are and creates a leaderboard for profits.

Although the social traders may not be doing any research themselves, the people they follow will be. Often, talented investors will open their profiles up to social trading in order to gain a larger following. On some platforms, like NAGA, they also receive money every time someone follows their trades, further incentivizing social trading for the expert.

One of the core concepts that drive forward social trading is the sense of community that it engenders. No longer are you a sole trader that’s fighting against the machine themselves. Instead, you’re united with a potentially international selection of other social traders, all following specific experts on your road into the green.

As this social element is central, social trading platforms also see a lot more community engagement. NAGA is a great example of this, having an active user base of over 1,000,000 users that regularly post on the stock forum.

Degen trading, on the other hand, is a solitary pursuit. The only interaction that a degen trader will have is likely through a third-party platform, like Twitter. Often, a degen trader will see other people talking about a stock and then rush to buy it without checking any of the fundamentals.

Actions of degen traders are what lay behind the famous MemeCoin ‘Dogecoin’, which saw incredible returns when Elon Musk tweeted about it. After degen traders around the world hopped on this altcoin, people then started selling out in masses, creating a few Doge Millionaires and leaving a lot of people heavily in the red.

While both do have a sense of community engagement, degen traders react to trends, while social traders create strong communities of information sharing and mutual support.

Another key factor that differs greatly between degen traders and social traders is the returns that are generally expected.

As degen trading is essentially picking stocks at random, the expected returns are all over the place. While some lucky individuals pick the right stocks that then proceed to ‘go to the moon’, many end up severely in the red. Nowhere is this more true with altcoins, which see mass user uptake after going viral on Twitter, only to come crashing down when the owners sell their shares and move out of the project.

On the other hand, while no form of trading has guaranteed returns, social traders genuinely see positive results. This is for two main reasons: the expertise of the trader that’s being followed and the power of social leverage.

eToro, one of the largest social trading platforms in the world, boasts an incredible 83.7% yearly average profit across their top 50 traders. By accessing this platform, you’ll be able to take a look at all of the traders on the platform, selecting one that has a history of performing well. While past actions don’t guarantee future results, if a trader has several years of strong stock choices, you might be onto a winner. 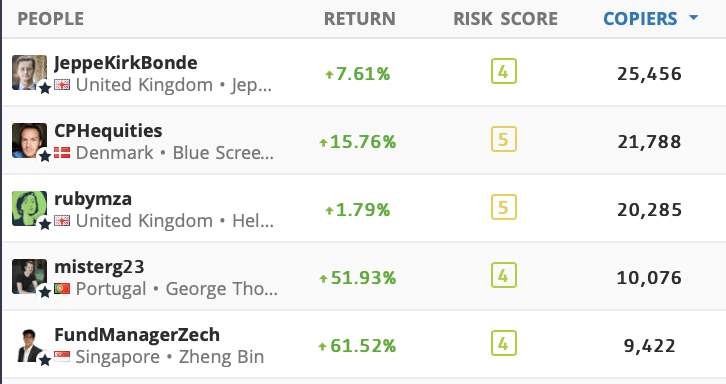 Additionally, considering that social trading relies on community, there is also the aspect that any trade a followed trader makes is then copied by potentially 1000s of users. Looking at some of the most followed traders on eToro, you can see that some users have 10,000s of followers.

Due to this, whenever they buy a stock, they’ve sent a trigger for 10000s of people to also buy that stock, instantly boosting the price of that specific asset. While platforms like NAGA offer no delay between the prices at which followers and experts buy, eToro doesn’t boost the same functions.

This means that experts are able to further leverage their trades, triggering price rises as they buy stocks for themselves and their army of followers at the same time. From this, the expected returns of these traders are much higher – especially when compared to the random selection of degen traders.

While both of these forms of trading don’t require any effort on your part, we’d suggest you stick to social trading. Not only does it promise slightly more predictable returns, but you’ll also be gaining access to a community of like-minded people that you can chat with about all of your favorite stocks, cryptos, and commodity picks.

Etoro plans to provide financial support, technical support, and marketing support to any project that partners with it. Interested creators may complete the application on the eToro.art website to begin.

eToro has also promised its customers an upgrade that will enable the storage of ADA or TRX assets in eToro’s money crypto wallet.