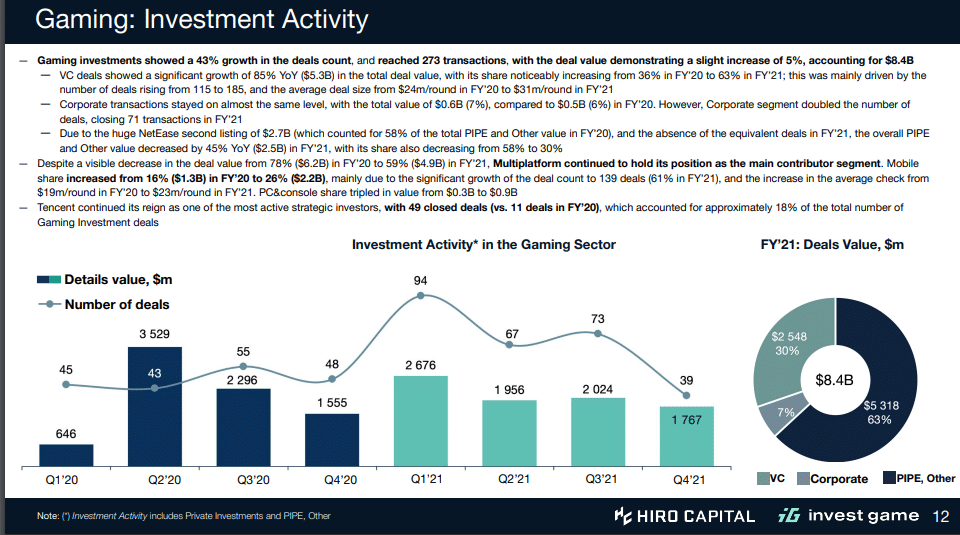 Another source of data shows that the annual blockchain game segment in 2021 exceeded $4.5 billion in trading volume, with nearly 1 million active users worldwide. Among them, in addition to Axie infinity as the representative of the chain game force, in the game revenue data continue to impact on the traditional game such as Arena Of Valor, especially in July to August last year 30 days revenue of more than 300 million dollars. In addition, there are also “virtual space” class chain tours that frequently appear to be sold at high prices of virtual land.

With the features of decentralized and Web3-oriented, the assets in blockchain games usually exist in the form of cryptocurrencies with the owner verified, such as NFT or crypto tokens, which are stored on the chain in a decentralized form. Players have absolute ownership and domination. These assets retain the asset characteristics even when they are out of the game, and they also will continue to exist in the player’s wallet even if the game is closed.  They are usually interoperable and combinable, features that are not available in centralized traditional games.

On the other hand, you are able to lend your game assets without official permission. For example, game guilds like YGG, in the early days, were leasing assets from games like Axie infinity and Evolution Land to some players, taking a portion of the players’ P2E income as commission. Blockchain gaming has considerable appeal to traditional gamers and it provides a unique opportunity for game developers to increase the number of users and allow them to explore new revenue and business models.

The Trend of Blockchain Games

Although the metaverse is conceptually far away from us, games are currently occupying an important position in the virtual world of  Metaverse. For example, the virtual world games represented by Decentraland and The Sandbox are expanding their business landscape and have generated nearly $500 million in NFT sales, and blockchain games are becoming an early prototype of the metaverse.

The virtual space built by the metaverse is a “real” replica of the real world, which should meet certain characteristics of the real world, such as interoperability (you can move any of your items from one place to another at will), and a high creativity.

At present, the “virtual space” game ecosystem represented by Decentraland, The SandBOX and Axie infinity has obvious boundaries, lack of cross-chain layout and poor interoperability of assets. Among them, Evolution Land is more forward-looking, and its ecosystem is expected to further serve the Web3 world by developing 26 continents including all public chains, eventually including most assets and realizing interoperability.

Evolution Land has completed the construction and opening of 5 continents, namely the Atlantis (Ethereum), the Byzantine (TRON), the Dawning (Heco),the Eden (Polygon) and will launch new continents on the BSC chain this year.

The high interoperability provided by multiple chains and cross-chains is probably one of the trends in the overall development of the blockchain game segment in the future.

In addition, it is not difficult to find from the development history of the traditional Internet that UGC is very important. And in the meta-universe, it will further take NFT as a carrier to upgrade from producing content to creating assets, i.e. UGA (User Generated Assets), which can possibly even provide power for the development of the meta-universe.

And in the Metaverse, it will further take NFT as a carrier to upgrade from producing content to creating assets, i.e. UGA (User Generated Assets), which can even power the development of the Metaverse.

In regard to creativity, Crypto Voxels, Matrix World, and The SandBOX currently provide users with 3D scenario editors and the ability to generate NFT assets that can further support the user’s UGA.  In addition, Evolution Land currently supports building on land and it will soon support 3D building scenarios.

Thus, EvolutionLand ecosystem is foresighted and progressive, while being a classic chain game that launched its internal beta version back in 2018, it is still popular and ranked in the top 5 overall among NFT games and leading in NFT trading volume, especially last year’s average daily activity user exceeding 5,000+ is quite a bright figure and has brought a large number of users to the Polkadot ecosystem. 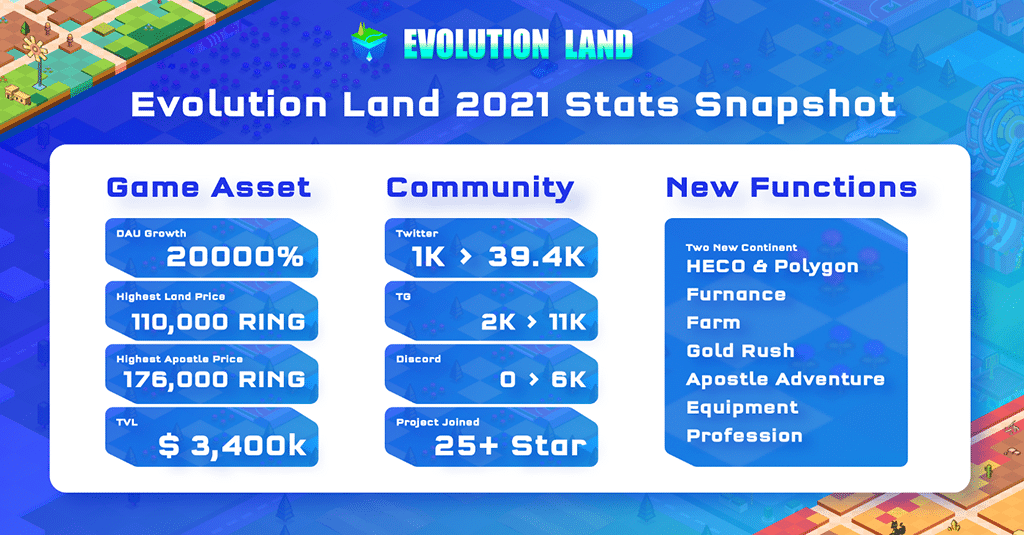 Evolution Land is worth exploring as one of the high quality blockchain games on the market today.

Evolution Land is built on Darwinia Network, the main DeFi + NFT cross-chain + DAO autonomy of the classic P2E game. As mentioned previously in the article, the continent of Evolution Land construction planning and progress, the variety of game elements, and the overall vision are more ambitious. We will explain them in the following section.

Evolution Land players need to obtain land first and dig resources on the land (gold, wood, water, fire, earth five types of FT type resources). These resources can be used to upgrade tools & create buildings for additional income. The current cost of a piece of land on the market is around a few thousand dollars, which is acceptable for most GameFi players.

Evolution Land is expected to generate 3D NFT buildings in the form of UGA with related tools that allow users to create 3D building models on the land. This Blockchain game will be able to showcase user-created content, and is expected to attach value to these NFT assets & create business scenarios to enrich users’ revenue streams. It will also lead Evolution Land to become a more developed metaverse ecosystem.

Mining Drills can help players to mine resources on the land, and the drill level directly determines the mining efficiency; and higher-class drills can be Synthesized with the Furnace, significantly enhancing their efficiency.

A Drill can be set on the prop slot of a piece of land, and the corresponding resources can be continuously extracted according to the level of the tool. 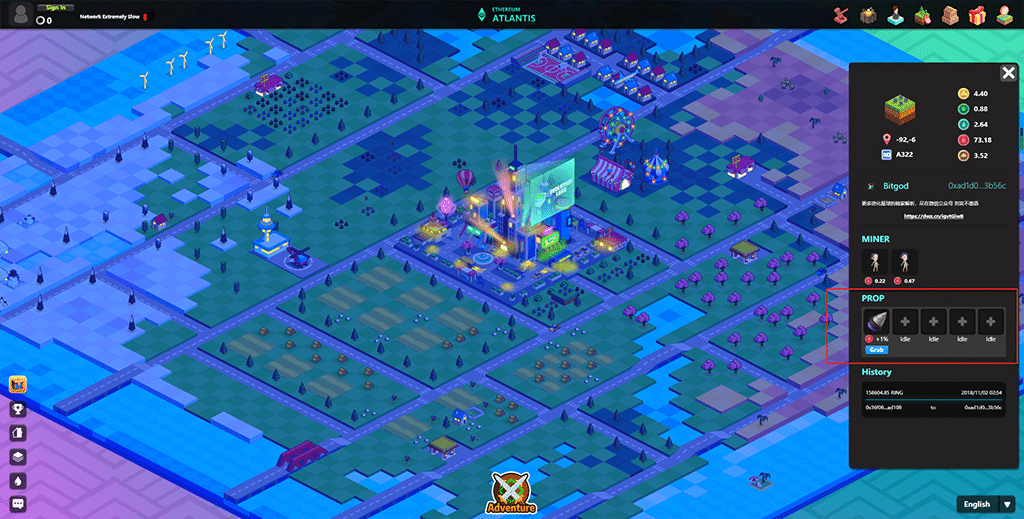 Also, the Drill tool can not only be synthesized but also decomposed and returned some FT assets consumed during synthesis.

In addition to tools, the Apostle is an important role for players to obtain resources in Evolution Land. Most of the operations performed by players in Evolution Land are done by Apostles. The Apostle is mainly divided into two categories: one is the collection type (NFT collection with scarcity), and one is the function type (to help players gain P2E revenue during the game). Different Apostles have different genes, talents, professions and other elements, so the benefits they can bring and the play scenarios they can try out are varied.  In addition, Apostles can be genetically optimized by breeding through the matchmaking system.

Currently, a miner Apostle can be placed in the land for automatic resource extraction, and the Apostle owner ( the player) has to pay its wages ( (in RING). When the owner does not have land, he can send the Apostle to the job market to find a job, and the hirer pays the Apostle RING token as a reward. The resources mined by the Apostle belong to the hirer. In addition, the Apostle also needs to constantly consume COO resources (FT assets) to stay alive, just like we breathe oxygen.

Combat Apostles (warriors and guardians) can be used in PVE mode and can be equipped or upgraded to improve their combat defense. These weapon items, also similar to Drill tools, improve their stats by constantly synthesizing resources.

In the cave explore mode, you must team your Apostles up to explore while COO will be consumed, and multiple tasks in a day will increase the COO consumption and the cost will double each time. 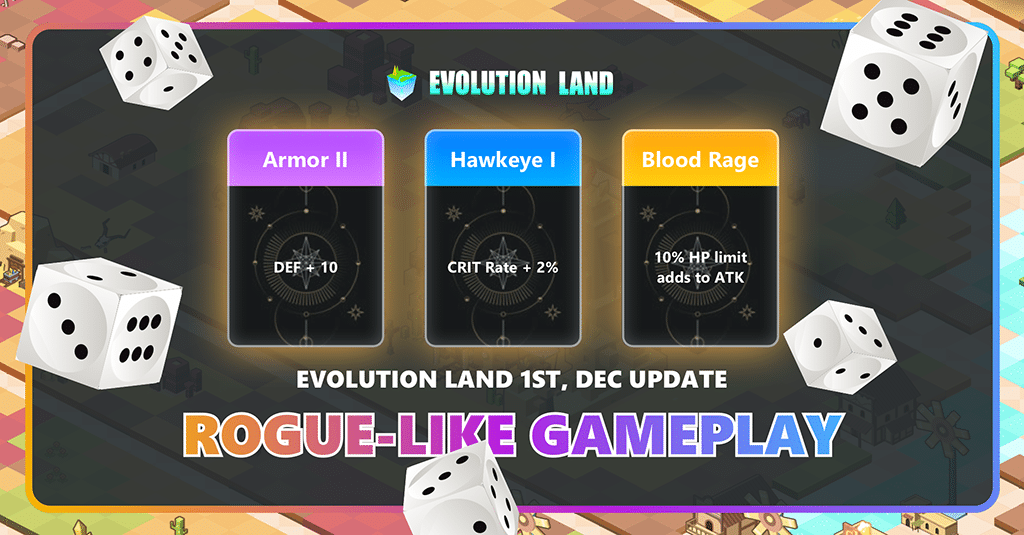 There are three major levels of the Cave Explore (each level contains three stages), and the final stage in each level is the boss with the stronger ability and also, rare materials! Apostle teams could collect Monster Bones from every monster and Monster Spirit from the boss; and use them to forge the basic materials for the equipment. Different bosses have different attributes, and the attributes of the Apostle equipment will likely be easier to defeat the bosses through the restraint relationship.

In addition to the spelunking mode, the Apostle AFK mode also like a similar adventure play, players team up four Apostles to carry out another planet adventure, and can get COO rewards (when the cave exploration mode COO is not enough, you can get COO through AFK mode), and also has Rogue-Like elements.

Evolution Land will also soon launch PVP gameplay, and we will be able to play players against each other in the form of group Apostles, similar to Axie infinity’s strategic battles.

Evolution Land is expected to create a multi-chain ecosystem that encompasses most blockchain ecosystems. Perhaps in the future, you can travel through the continents in Evolution Land without barriers, they will all be a “parallel world” and accommodate most assets. Eventually, it will gradually transition from a chain ecosystem to a meta-universe space, and through the integration of various types of Web3 applications such as DeFi, GameFi and SocialFi as a link bridge and entrance, it is expected to meet most of the transactions and consumption scenarios of users by browsing the continents in Evolution Land.

Up to now, Evolution Land has introduced new elements in each continent, for example, in Atlantis continent access to Polkadot pets, obsessed cats as pets, in Eden continent Polygon ecosystem in NFTrade, Quickswap, Mytrade as a trading hub, Snapshot as a governance platform, Formless as game promotion platform. On the Columbus continent, Snowswap is accessed as a trading hub, Subview and Subscan as browsers. With the further enrichment of elements accessed in the Evolution Land ecosystem, users are expected to experience a one-stop Web3 ecosystem through Evolution Land.

In addition, according to the official disclosure, Evolution Land will soon launch the virtual world construction function, and users could build all kinds of scenarios on the land by themselves. Based on this, it can interface with the cross-chain ecosystem. Therefore, with the business model being further built and extended to all areas, it will become a real metaverse world.