Based on the designed model, Ocean DeFi comprises 3 marketplaces and a stablecoin which will serve as the governance token for the ecosystem.

The crypto sphere has been replete with numerous blockchain-based projects and innovations in recent times. While many of such projects are positively stirring the desired change in the financial ecosystem, a handful of others have been unable to stand the test of time.

The ability of a blockchain project to stay resilient and to transform in the face of challenges, competition, and regulations is a key determinant of its sustainability in the long-term. With many blockchain projects and networks in the crypto sphere, the growing strides of Empow.io are resonating with players in the space particularly those keen on transforming social media using blockchain technology.

Besides Empow’s mission to revolutionize the social media space, the development team is working on Ocean DeFi, the brainwork of months of research and remodeling of extant offerings in today’s Decentralized Finance ecosystem.

From Empow Network to Empow.io and Now Ocean DeFi 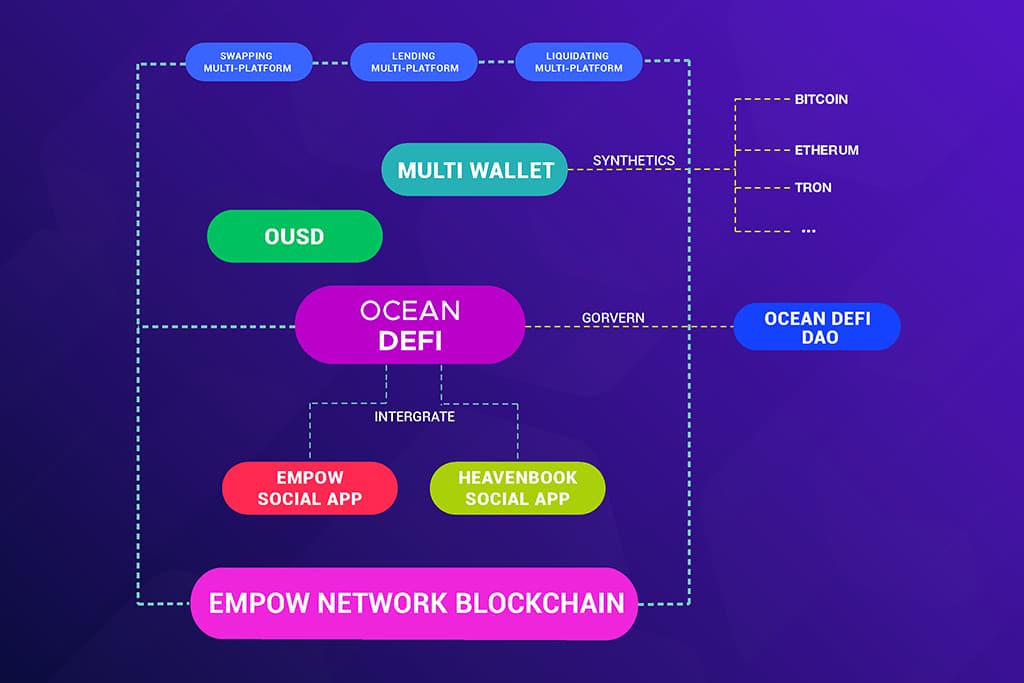 Following the launch of the Empow Network, the social media Dapp Empow.io was unveiled back in February and has been able to gain traction in the blockchain social media sphere.

Empow.io was  described by Bitcoin.com as the first decentralized visual & interactive content social platform in the world. The decentralized social network Empow, built on top of the Empow blockchain tailor-made merely for the social network, aims to be a new data-protected platform for users to not just create interactive & visual images, videos, and GIFs but also earn money for their contributions.

Since both the Empow Network and the Empow.io systems were launched, the former has seen over 50,000 user addresses while the later has nearly 5,000 daily active users.

By following trends in the blockchain ecosystem, the Empow team is delving into the world of decentralized finance with Ocean DeFi, an interchain DeFi platform built atop Empow Network. Through the Ocean DeFi product, Empow hopes to be well suited to mirror the world of traditional financial services in the decentralized world with scalability and autonomy.

More on the Offering

Ocean DeFi is the solution for the interchain DeFi problem by representing all assets on the Empow Network. Based on the designed model, Ocean DeFi comprises 3 marketplaces and a stablecoin which will serve as the governance token for the ecosystem. The first of the Ocean DeFi marketplace is dubbed the swapping marketplace, this swapping marketplace has already gone live and will foster a cross-chain swap of different assets on any decentralized networks by using synthetics and Automated Market Making pricing system.

Whilst still being incubated, the lending marketplace will allow users to lend and borrow at the best rates. The credit score system will be built into the smart contract to ensure an efficient marketplace.

The third marketplace is the liquidating marketplace which will help to liquidate user’s assets particularly those locked in the Ocean DeFi marketplace. The governance token is dubbed oUSD, a stablecoin backed by the Token ODEFI as well as other reserved assets.

Besides the marketplaces, Ocean DeFi utilizes trustless bridges which it uses to create synthetics, thus helping to converge all assets on other blockchains to Ocean DeFi. The Ocean DeFi system also has a unique rewarding system. Liquidity providers at swapping, lending, and liquidating marketplaces are rewarded ODEFI. Users of these 3 marketplaces can also be rewarded by ODEFI for their participation in the platform. The ODEFI is used as the governance token and with it, users can vote on proposals, and for staking to increase their reputation amongst other uses.

The journey from the foundational Empow network down to Ocean DeFi has mirrored the team’s resilience and there’s an expectation of swift integration by the existing users of the Empow Network and Empow.io.

For more information, you can visit Medium or Twitter accounts of Ocean DeFi, or join the Telegram channel.

Origin also says its staking program will help limit its token’s circulation supply, which will benefit the project’s token economics.

As a precautionary measure, Origin protocol has disabled all deposits to its vaults and warned users not to purchase OUSD on Uniswap or SushiSwap.