The Ethereum is going slightly up in late January, reaching around $107.3w on Jan 31, says Dmitriy Gurkovskiy, Chief Analyst at RoboForex.

The Ethereum is going slightly up in late January, reaching around $107.3w on Jan 31, says Dmitriy Gurkovskiy, Chief Analyst at RoboForex.

Overall, however, the crypto is following a downtrend along a steady channel. On H4, after reaching 76% Fibo, which is the round number of $100, the price bounced to the resistance area around $110. While the channel has not been broken out, the downtrend is still here to stay, though. The current resistance is being tested, and the price may well go down to $95 or even $80.86, the low. The MACD is meanwhile converging, pointing out a possible pullback; this would be especially probable if the price broke out the resistance at $110. The target would then lie at the long term resistance, or $125.

On H1, there’s more technical information on Ether. The correctional uptrend supported by the Stochastic is fading out: the indicator entered the overbought territory, while the price tested the resistance area at $110. A black cross formed by the Stochastic may send the crypto lower. 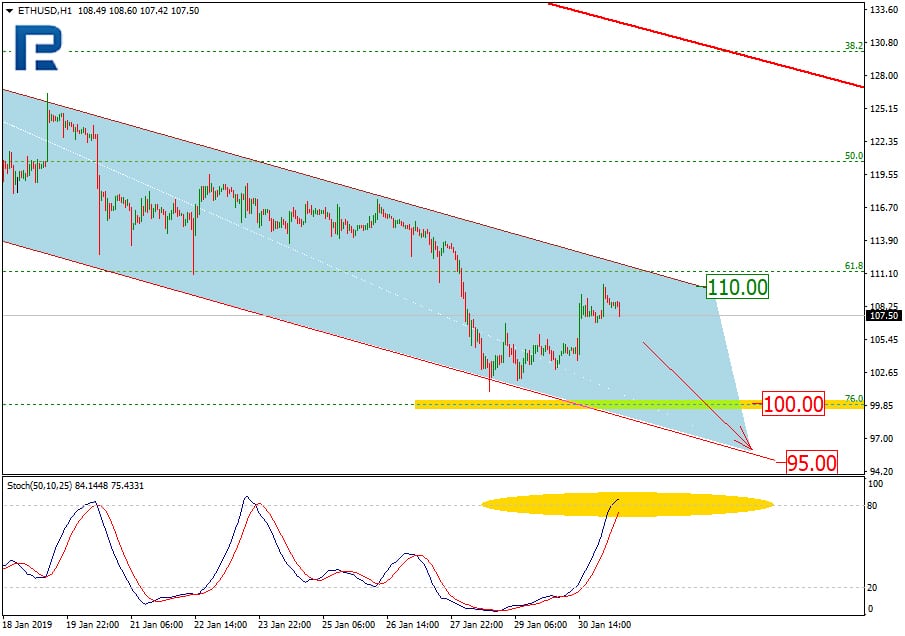 Meanwhile the Ethereum mining compensation went down from ETH20,000 to 15,000 per block, which makes Ether mining less profitable. On the other hand, this is how Ethereum is getting ready for Constantinople hard fork, which should take place on Feb 27. While the mining compensation reduction is a difficulty bomb, which will reduce the numbers even further once the hard fork is ready, the next bomb is only scheduled for next year.

In essence, difficulty bomb lies in increasing the time spent to find every block in the chain. This leads to less Ether mined, and, subsequently, speeds up the network. Sooner or later, Ether mining will not be possible any more.

Ether hard fork should have taken place last year, but was postponed due to a lot of bugs and issues.

The Ethereum gas fee has dropped this low for the first time since July 2021.

Ethereum miners and mining pools continue to mint money despite strong price corrections. The Ethereum (ETH) hashrate has surged to new highs at the block height of 14,770,231.

According to Hayes, the 90-day correlation between Bitcoin and the Nasdaq-100 rose to a new record peak.