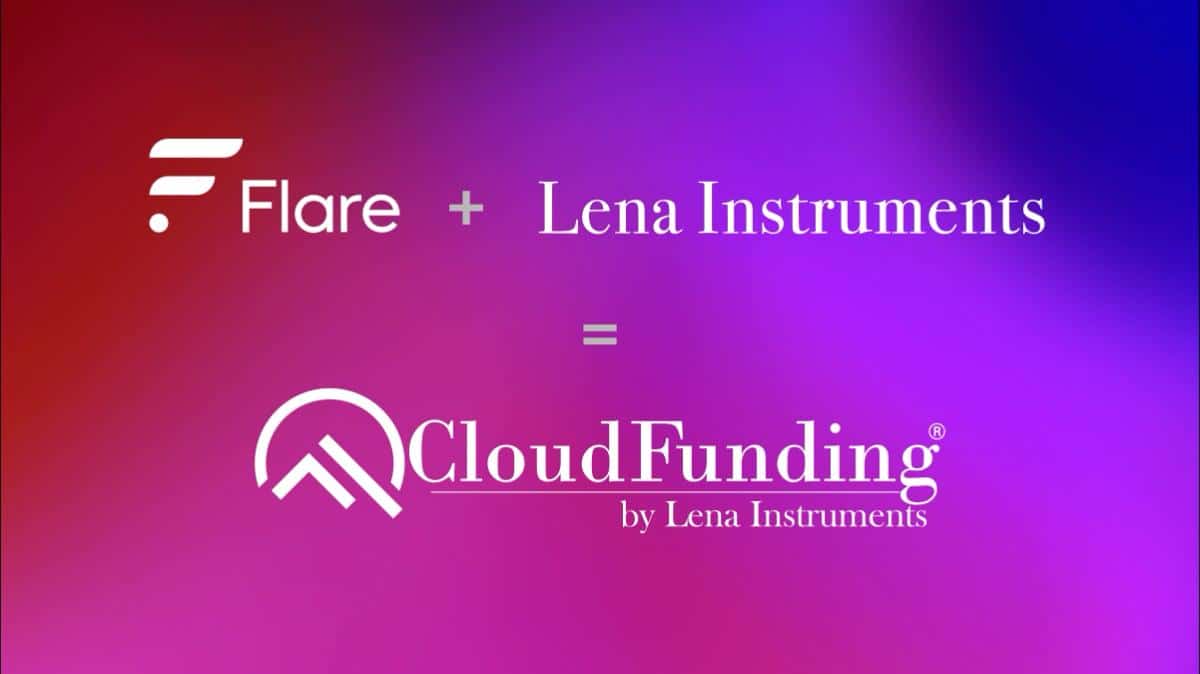 Flare Network, the new blockchain that aims to connect everything, has announced the launch of a novel crowdfunding launchpad in partnership with the Swiss blockchain software and infrastructure firm Lena Instruments.

CloudFunding is a launchpad that’s designed to bring a new dimension to the concept of crowdfunding, with contributors gaining exclusive access to carefully curated crypto projects and unique benefits, while retaining custody of their principal investment. In current crypto launchpads, contributors simply decide how many tokens they wish to allocate in support of the initiative. CloudFunding contributions instead come from the rewards earned by contributors’ wrapped FLR/SGB capital, a model that ensures contributors will always hold onto their principal investment.

Through this unique model, CloudFunding provides one of the most secure and low-risk crowdfunding mechanisms in the crypto industry. Contributors can dedicate anything from 1% to 100% of the rewards their principal generates to fund the projects they believe in, all while retaining their original investment.

In return for their contributions, users will have access to an IOU of the project’s token, available before the token generation event, which will be listed by a number of Flare’s decentralized exchange partners. These IOUs can then be freely exchanged without needing to wait for the project’s native token to be distributed.

For projects launching on CloudFunding, the major benefit is they receive a regular cash flow that comes in at the end of each reward epoch, and for the entire duration of their community’s contribution. Using this cash flow, CloudFunded projects will have a way to pay their bills, fund development, market themselves and create a long-term business plan while keeping their communities up to date on their progress, deliverables and milestones. They can build greater trust with their communities, with backers assured the peace of mind that comes from knowing they retain custody of their initial principle throughout the process.

Uniquely among crowdfunding launchpads, CloudFunding campaigns are divided into two periods: the Raise Period and the Yield Period. The Raise Period is where the community is asked to show its support by wrapping and locking their SGB/FLR tokens in a smart contract, with the aim being to reach a specified Target Amount before a deadline set by the project’s team. Assuming the Raise Period was successful, it will be followed by the Yield Period, during which the rewards generated by the Target Amount will be donated to the project after each rewards epoch. For projects that haven’t yet launched a native token, the token IOUs will be distributed to the community immediately in its place, allowing backers to begin trading it at once. The Yield Period will be specified by the project, and can last for a maximum of five months. At the end of the Yield Period, contributors will automatically receive their original principal plus the project tokens, proportional to the IOUs they hold.

On the other hand, if the Raise Period was unsuccessful, the project will not be able to secure CloudFunding and the principle and rewards accrued so far will be returned to the community.

“CloudFunding is a perfect example of how developers can take advantage of the decentralized data infrastructure built natively into the Flare blockchain. By using the Flare Time Series Oracle as the mechanism for contributing to exciting new projects, CloudFunding creates a win-win-win situation. Flare obtains another FTSO provider that’s highly incentivized to provide accurate price data to the network; new projects get early access to community funding and support; and Flare token holders get the opportunity to join new exciting projects with zero risk to their principal.”

“Flare Network recognizes the value of CloudFunding technology in the blockchain space, and is grateful and excited that Lena Instruments has chosen Flare and Songbird to build its CloudFunding platform.”

“Lena Instruments, being a major token holder in Flare, is of course committed to its long-term success. It is therefore only natural for Lena to utilise its know-how and engineering talent to design new products that we hope will contribute to the development of Flare and appeal to the public. CloudFunding is a modern, decentralised launchpad that will allow the community to support the best possible projects within the ecosystem, having been carefully curated by the platform. Contributors can, without ever having to sell their FLR or SGB, keep up to date with developments, deliverables, and milestones made possible by their contributions.”

“CloudFunding is one of the many products Lena will be releasing over the next few months on Flare and Songbird to improve the public’s, projects’, and institutions’ access to this exceptional Layer 1. We would like to thank our partner Flare Networks for the trust they have placed in our team, and promise to continue delivering smart, necessary, safe, fun and user-friendly products to accompany Flare on its way to success.”

Lena Instruments is a leading Swiss IT company providing sophisticated blockchain infrastructure solutions and software. Lena was founded five years ago as a result of the research done at the Swiss Federal Institutes of Technology in Lausanne and Zürich, and since then has been successfully delivering solutions to the demanding and highly regulated Swiss/European IT and banking industries.