The Return of the God Game – Apeiron Makes 2.5M USD in 4 Hours

Apeiron, the world’s first play-and-earn god game built with NFTs, began its Primeval Planet Presale on 14 April, with more than half sold out before opening to the public, a value of over 900 ETH. For many, this will be their first dive into crypto-gaming, and the beginning of an entrepreneurial journey with a play-and-earn project built on the fundamentals of rich gameplay and strong storytelling.

Players will need at least 1 planet to begin playing the game, with the Planet Presale being the first chance for players to buy their own world. Those who would like to try the game for free will be able to play by joining partnered gaming guilds, while those interested in developing their NFT portfolio may purchase multiple planets.

Apeiron, which has been in development for over six years, allows players to “play god” by taking on the role of Godlings – newborn gods with the ability to control elements such as water and fire to assist cute’n’chubby doods in building their society and going about their daily lives. Players can grow their own planets as well as control their world’s powerful Avatar in exciting real-time card-based battles. One of the game’s most unique features is its Tri-Token system that enhances the value of Apeiron’s NFTs. Apeiron has a fully diluted valuation of $80 million. The game will be launched in Q4 2022.

The Primeval Planet NFT Presale consisted of planets broken into five tiers of rarity, with the Elemental Core planet being the least rare and the Primal Core being the rarest. The rarer the planet, the higher the chance of getting a more concentrated elemental (fire, water, air, earth) distribution, allowing players to access more potent combat skills and planetary development abilities. Prices for the Primeval Planet NFTs were released within the range of 0.1 – 6.66 ETH. 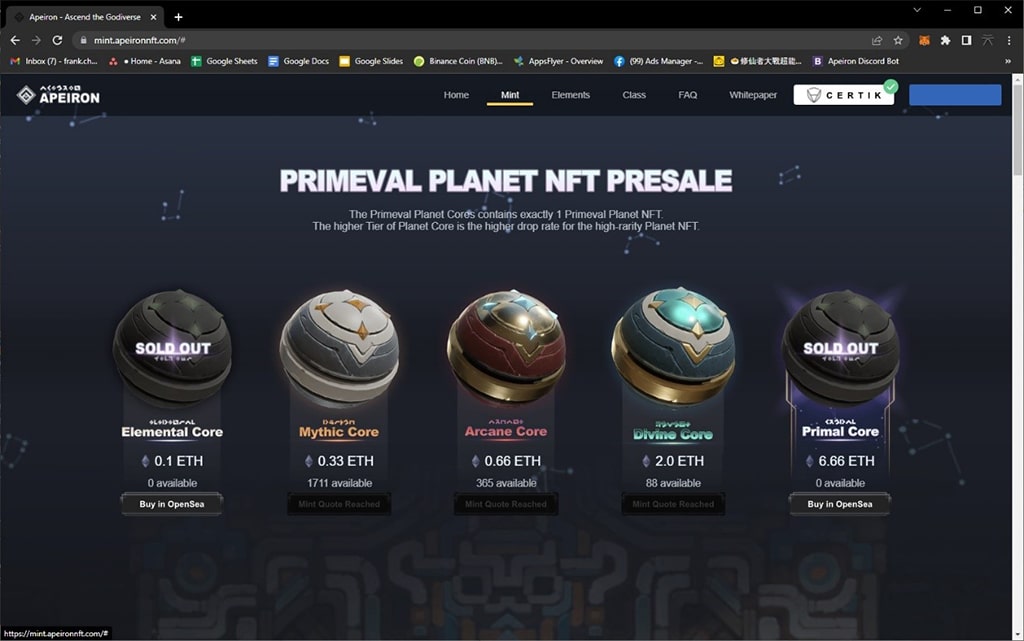 Frank Cheng, Co-Founder of Apeiron, said that “the main draw of these Primeval Planet NFTs is that if you own two, they can be “bred” (we call it Celestial Conjunction), to create a new Planet! Just like Axies [from the blockchain game Axie Infinity], if you have 3, you can trigger an infinite breeding cycle as well.” Cheng pointed out that once players have an infinite breeding loop established “you [can] literally ‘print money’, and with our ingame scholarship tools allowing you to rent out your planets, you can even start your own mini guild or alliance.” In that sense, players who are interested in breeding are strongly incentivized to own more than one planet, with 3 being the magic number.

Cheng also mentioned that “After the NFT presale, Apeiron will be closing its seed round, which has seen some of the biggest T1 investors in the world, who are expecting Apeiron to grow into one of the biggest blockchain games of the year.” Cheng went on to expand on Apeiron’s plans: “Apeiron is going to partner with over 22 gaming guilds, with big ones having in seed round and mid-to small ones in private round. These are hand picked ‘evolving’ gaming guilds that don’t just run on scholarship or f2p models, but with more dedicated and passionate members who seek to evolve into different specialized fields of web3 tech and gaming.” Cheng stressed that Apeiron is not a short term investment, but rather one that will appreciate value in the long term, contributing to the development of a global franchise.

The public minting phase is still ongoing and will end on Apr 18th.

Apeiron is the world’s first NFT-based play-and-earn godgame. Apeiron will feature a unique card-based action-adventure combat system combined with godly simulation gameplay inspired by classic god games like Populous and Black & White. Players can construct planets from above before descending to the ground as an Avatar to solve the mysteries of the universe. Players will grow their planet to the point of developmental stagnation, then reset the planetary cycle to allow for even more advancement and thrilling late-game alliance level GvE and GvG activities. Apeiron will use a tri-token architecture, which means that there will be three separate tokens to navigate their ecosystem: a governance token, a play to earn token, and a premium alliance token.