The gold price has reached all-time highs and breaks new records every week.

The market, investors, central banks, the whole world are all-eyes on $2000. Over the past month, gold added 10.83% in price, which is just 1.28% less than the previous record monthly growth achieved in August 2011. Gold is trading above the all-time high of $1921, ahead of an important resistance at $2000. Let’s take a closer at the latest surge and what should we expect next week.

Why Is Gold Valuable?

In the periodic table, gold is one of the “noble metals”, out of these metals only does not rust, barely reacts with other elements, is a rare metal, has a golden yellow color, other rare metals, with the exception of copper, have a silvery white color, and copper rusts when contacted with moisture. Gold has long been used as a currency, an indicator of wealth was to have gold utensils, gold jewelry in the house, the state treasury mainly consisted of gold coins and gold items. In the modern world, gold is used not only for the manufacture of jewelry, because of its resistance to corrosion and high conductivity, gold is used in astronautics, medicine and in electronics. It’s price and value were always regulated by the supply and demand.

In 1944, a number of countries signed the Bretton Woods Agreement on the organization of monetary relations and trade settlements between countries, which replaced the traditional settlement system based on the “gold standard”. The dollar, which was a currency convertible into gold at a fixed rate of $35 per ounce, was adopted as a reserve currency by member countries. Thus, the US dollar, along with gold, became the currency for international settlements, until that moment, as it was written above, gold was the only asset for international trade settlements. This is how the Gold Dollar Standard arose, and during these years the United States owned 70% of the World’s gold reserves. In the mid-60s, the economic growth of the Western European and other participating countries results in a situation where dollars stored in the central banks of the countries exceeded the gold reserves in the US treasury, the dollar began to lose value. In 1971, the 37th President of the United States, Richard Nixon, adopted several economic reforms, one of which was “cancellation of the international convertibility of the US Dollar to Gold”, thus the US switched to issuing fiat money – not backed by gold and other assets. For the countries participating in the Agreement, this was the announcement of the termination of its operation, which subsequently ensured the transition to a system with a floating exchange rate.

Since then and nowadays, Gold price is calculated in US Dollars, therefore, the dollar index and the welfare of the US economy affect the price. If the dollar index rises, then the gold price falls, if the dollar index falls, then the gold price rises as the demand for the precious metal increases. But not only the US economy is the basis for the rise and fall of the price of gold, there are more fundamental data on world markets that provide the price of the precious metal, such as: supply and demand, economic data of other countries (interest rates, inflation, etc.), gold production, which is becoming more and more expensive.

Is Gold Price Surge Connected to the Covid-19 Pandemic?

Connected, but there is more. There was talk of an impending economic crisis even before the pandemic, and still the economic crisis as such was not announced. Even if we take the 2008 crisis as an example, then a significant increase in the price of gold took place just after it came out of it in 2009, before it lost almost 25% in 2008 thus making it cheaper and more attractive for investors to buy. Over the past decade, more and more countries have withdrawn their gold reserves from foreign vaults, in particular from New York and London. Central banks in 2019 alone gained a total of 650 tons to their reserves. The largest buyers over the past year were Poland, Russia, Turkey, China. But not only that, most countries, including the EU countries since 2012 repatriated most of their reserves from the New York and London vaults. Thus, more and more countries want to move away from the US domination of the world economy, since any confrontation with the US could threaten the imposition of sanctions, which will have a bad effect on the economy, while having gold in its reserves, the country’s Central Bank can, by selling part of its reserves, save the currency from devaluation. 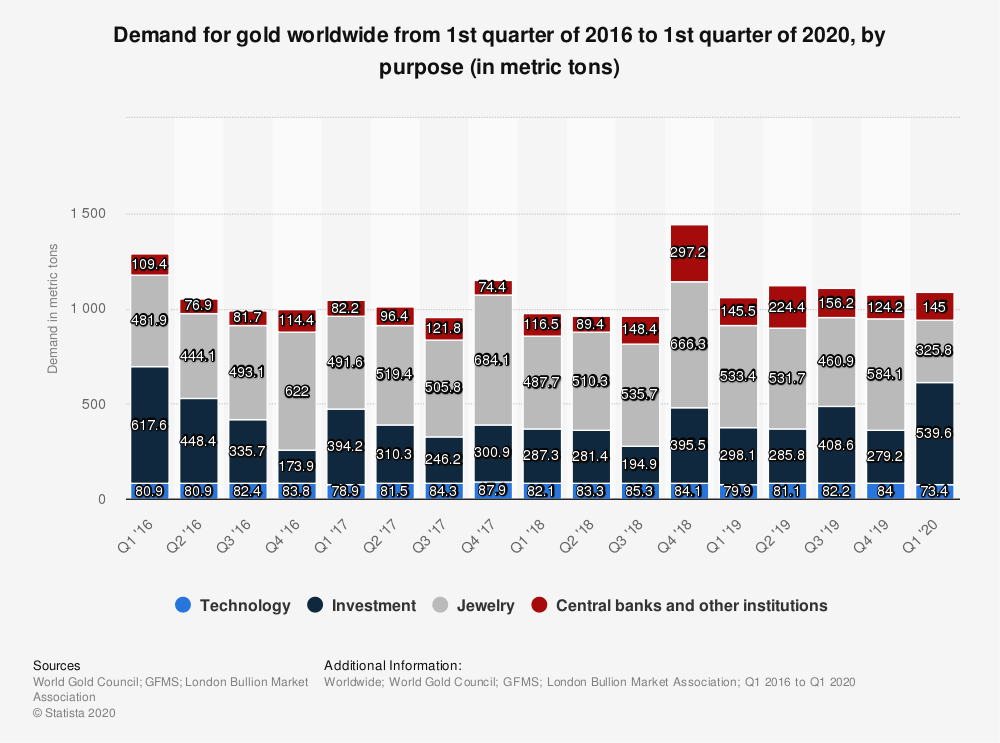 In 2020 the purchase of gold was suspended by the central banks, which are active buyers of gold over the past 4 years, namely, Kazakhstan, China and Russia, Turkey has increased its reserves in 2020 purchasing 170.5 tons of gold up to date, which is 11.5 tons more than for the whole last year. Despite the significant numbers, the largest volume of gold comes from investments. Just like the central banks of states, investors in times of unstable economies use gold to hedge risks. The large number of options for investing in gold makes this metal even more attractive during turbulent times. During the pandemic, large economies launched printing presses to support and stimulate economic growth, which was a signal to buy gold for investors as the more currency a country prints, the less valuable the currency becomes.

The dollar index in relation to other currencies is falling, this is due to the increase in the number of people infected with Covid-19, poor economic performance.

Despite the correlation and direct dependence on the US dollar index, the price of gold rose against all currencies.

And the most popular gold ETF – SPDR Gold Trust – tested the 2011 high.

We have brought these figures in order to indicate the fact that the rise in prices is due only to speculative actions in the financial markets and the $2,000 mark will be decisive. It is obvious that investors who have been waiting for the growth of gold at this level for a long time will decide to get off the train. This can be explained by the last daily candle of this week. 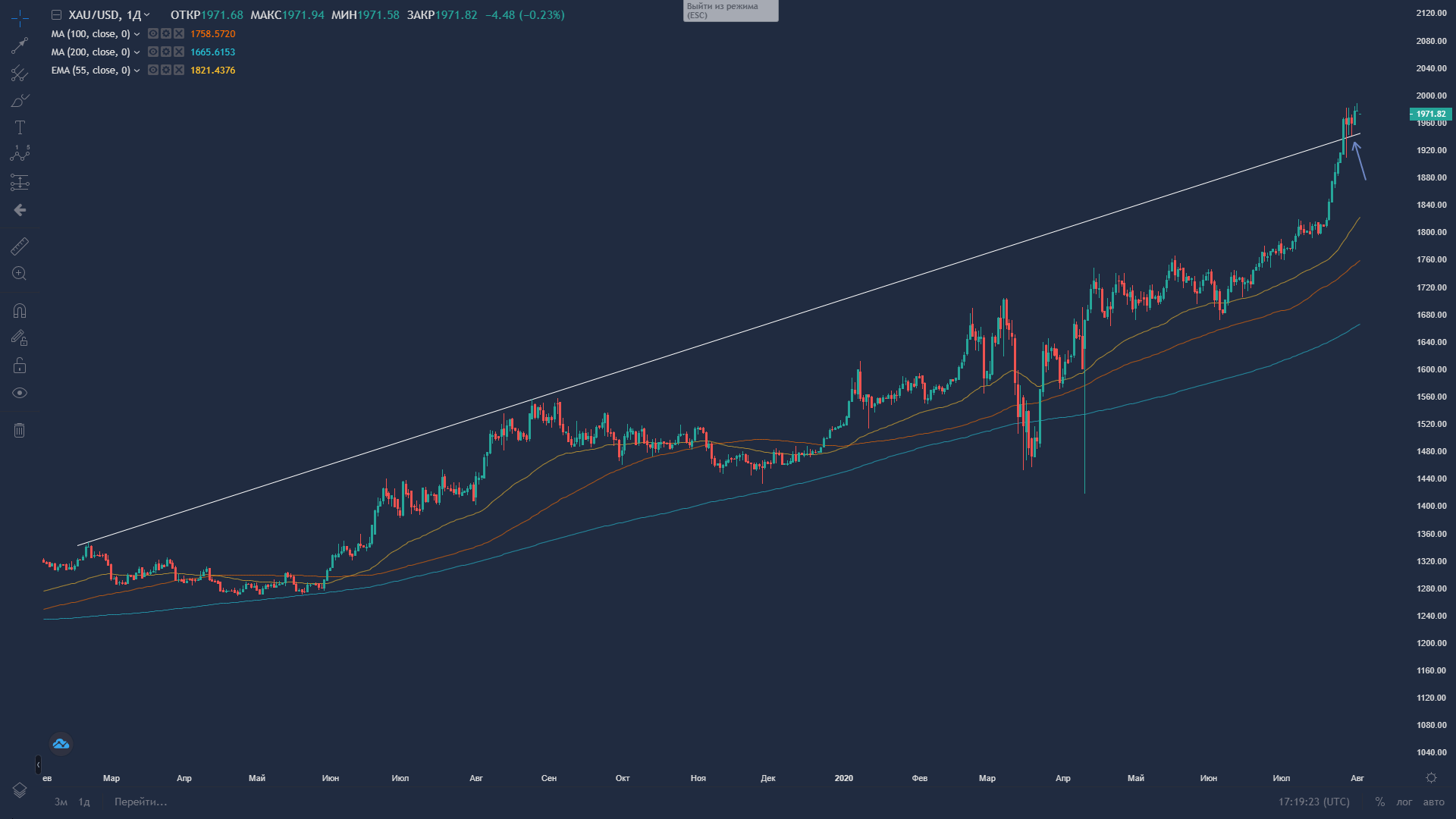 The chart shows that the bulls got a little tired, although the price remained above the dynamic resistance and tested it several times as a support, the candle clearly demonstrates the tiredness of the bulls, which are ready to sell gold at a profit at the slightest opportunity.

Today, we witnessed a slight correction followed by a setup of another record high at $1987.59. The hourly chart is still bullish although there are several barriers that are restraining the Gold from reaching the cherished $2,000 per ounce. 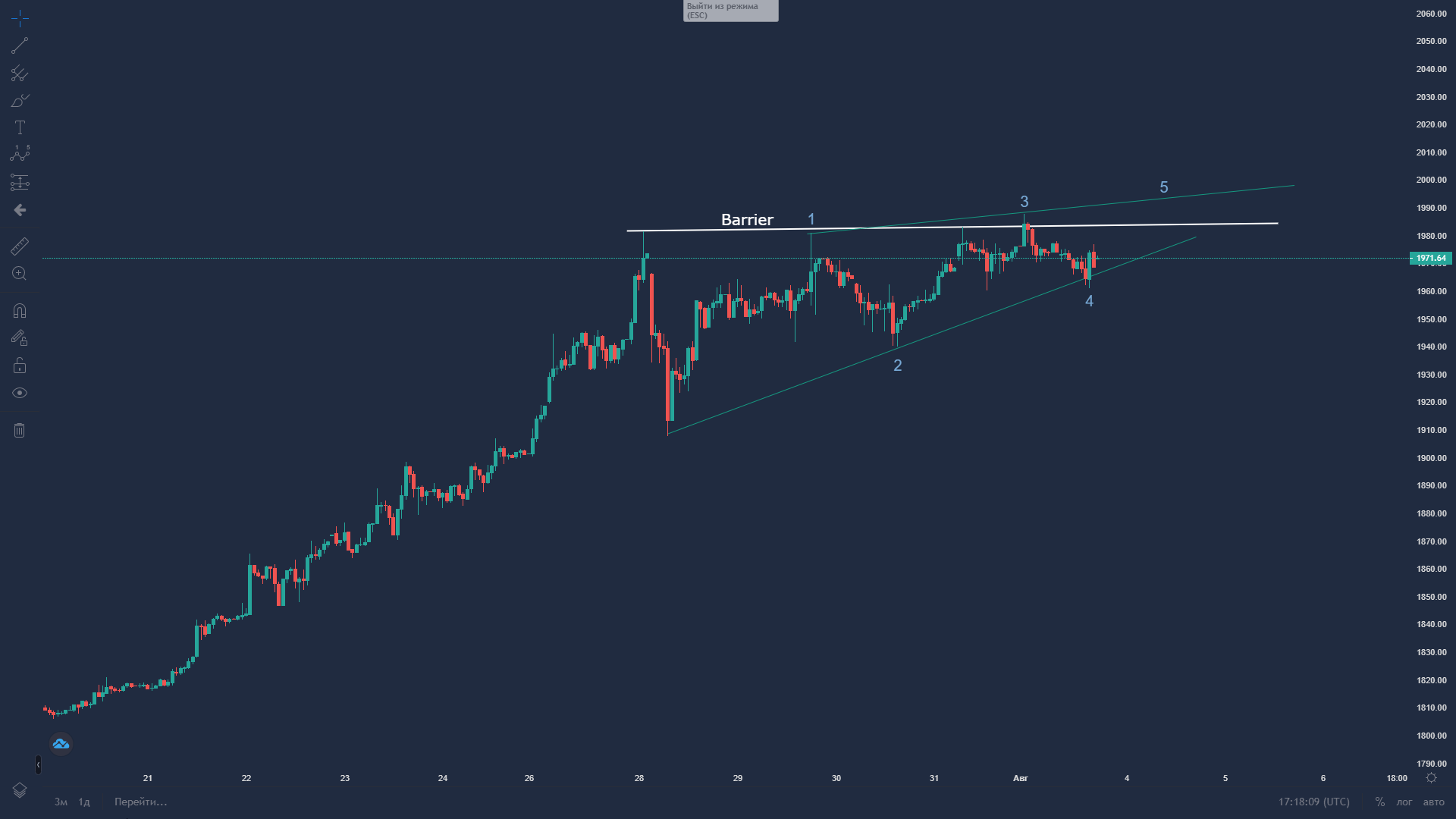 One of the signals for shorts at the levels of $2,000 – $2,100 in gold can serve as yesterday’s movement of digital gold – Bitcoin, the price of which has rolled back to $10,500, reaching $12,100, it is quite possible that the same can happen with gold, namely, investors will want to get a profit on the investment and start selling gold. If the dynamic support is broken then we might see deeper correction, though Gold still looks bullish, most likely after the correction there will be another impulse. 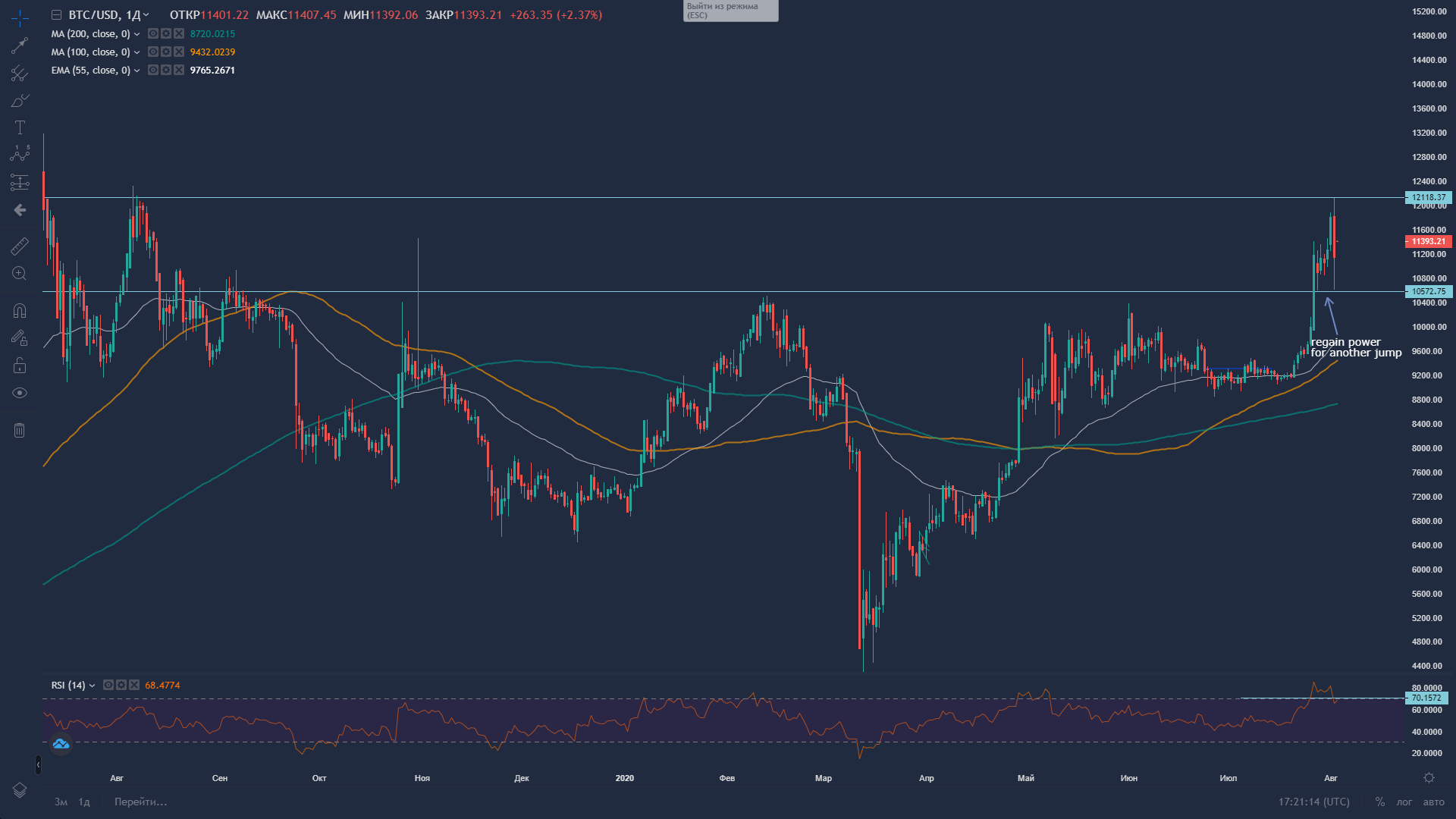 This whole week, US companies will continue publishing their reports on revenue, it is worth keeping a close eye on US indices, as they look positive and Dollar Index was able to regain some value today.

By the way, about American companies, you should also follow the news about Microsoft’s purchase of a stake in the American division of the social network TikTok, owned by the Chinese ByteDance. The US wants to ban the use of the TikTok app as part of the trade war with China, and the two countries have also exchanged consulate closings in Austin and Chengdu, respectively. If the Trade War escalates, the global tension will escalate as well driving the Gold price to new highs.