Cryptocurrencies, or more particularly, Bitcoin (BTC) have been around for a little over a decade and while it quickly became a norm to many of us, those in Gen X and Baby Boomers age range saw the innovation as an excess of technological ingenuity.

I was just getting into college when the buzz around Bitcoin was just making the rounds with the mysterious Satoshi Nakamoto introducing what would soon lead to the birth of many new cryptos and blockchain networks.

Year on year, the digital currency ecosystem evolves with the introduction of new products and innovations. In 2015, Ethereum was launched, recreating the ecosystem such that applications can be built on the blockchain network. This alone opened up the capabilities for various Decentralized applications to be introduced and eventually opened up access to decentralized finance (DeFi).

Last year was arguably the year that DeFi truly came into the limelight. Innovative protocols were launched, and yield farming (liquidity farming) gained massive prominence. In the past year, the major metric for measuring the growth of DeFi is Total Value Locked (TVL) and despite the current market correction, TVL for top protocols as profiled by DeFiPulse has grown from $2.28 billion on July 8, 2020, to $54.56 billion today.

The launch of the governance token of the Compound Finance protocol dubbed ‘COMP’ was a pioneer in bringing yield farming to the limelight. From what I have seen in the crypto ecosystem thus far, the proliferation of protocols with similar fundamentals is not uncommon. However, not all of the launched projects have the fortitude to blossom into an established outfit as many turn out to be a scam.

Amongst the success stories in the yield farming ecosystem thus far include Aave, Maker, Compound, and Alpha Homora amongst others. This piece assesses how I walked my dad from ground zero to a confident yield farmer.

For those new to the cryptospace, it can be a very difficult thing to get involved with farming in all of its facets including liquidity provisions, lending, and staking. While I believe everyone has their uniqueness, I can argue that those who will be more adamant and strong-willed than my father in embracing crypto will be many. With him eventually becoming a crypto believer, I have no doubt that with new platforms building the solutions dedicated to improving user’s experiences, we can get DeFi and yield farming products out to anyone, anywhere.

The Problem with Farming in General

As an offshoot of decentralized finance, yield farming involves some intricacies that often take most people some time to get used to. To understand this challenge very clearly, let me provide a key context and basic understanding of what yield farming is all about.

In yield farming, anyone who supplies liquidity to the protocol is often rewarded in the form of a new digital currency or token. The liquidity supplied is usually in the form of fiat pegged stablecoin which may range from USDT, BUSD, and DAI amongst others. The rewards are paid out either as Annual Percentage Return (APR) or Annual Percentage Yield (APY). While both terms are used interchangeably, it should be noted that the latter takes into consideration the effect of compounding while the former does not.

Decentralized finance applications are often non-custodial. What this means is that the protocols do not keep your funds directly. To begin with, you will need to connect your DApp account with a third-party wallet service provider like MetaMask or Trust Wallet. This connection often poses a small challenge for some, and beyond this, the actual methodologies are not also quite straightforward to grasp.

The Liberation of My Dad

I was born into a family of a very wealthy businessman. You know, those privileged business moguls who were early risers in the retail and consumer subsector? Yes, that’s where my dad made his fortune, and at the peak of his engagements, he began diversifying his assets into traditional assets like stocks, bonds, and gold. If there is a definition of a safe investor, then you can call my dad that.

When I started investing my pocket money into crypto, it brought in a lot of rife between us, and at a time, my dad even threatened to cut my funding. However, some of my early investments were already yielding, so I did not take his threats to heart. Over the years, the success of Bitcoin and crypto in general has not gone unnoticed, even to my dad.

When one of his closest friends came to the house with the tales of how he invested in Bitcoin and the apparent growth, his interest ignited. One day he asked me; “Son, now how do I invest in this crypto thing without losing my money?” A question I have been anticipating for close to a decade.

Of the options to bet on crypto, volatility is always something to watch out for. Since I have tried my hands on almost all the options in the space, including staking, liquidity provisions and yield farming, I can easily recommend yield farming to my dad. Yield farming (or liquidity farming) is the act of locking your digital currency assets to power a wide range of activities on a smart contract-controlled protocol. New tokens are earned for entrusting your assets to these protocols. This way of earning passive income sounded attractive to my dad.

However, the problem of difficulty in getting started persists. This led me to research platforms that have a very simple user interface and provide a good user experience. I found Nominex exchange as the perfect option.

Nominex is a next-generation centralized exchange that offers a lot of decentralized finance (DeFi) capabilities including staking, liquidity incentives, and farming.

Nominex is the first exchange with a utility token and utility farming. This utility farming feature allows trading with a 100% discount. In general, you get the maximum income from a vibrant affiliate program. After the launch of the Binance brokerage program, users can trade on Binance for free and at the same time constantly farm NMX, the exchange’s native token.

With the hassles associated in getting started with the majority of yield farming protocols, I did not even bother telling my dad about them, rather, I pitched the Nominex Simple Farming Mode to him.

What Is Simple Farming Mode?

As a cryptocurrency believer and DeFi user, you probably remember how your immersion into the ecosystem and farming in particular began. Based on the lack of technical know-how, you likely began to do some actions only after a long time, because the first time it was pretty hard to comprehend. Nominex has finally solved this problem by introducing the Simple farming mode.

Just as the name implies, this is a new way of farming, for which you only need to have USDT in your exchange wallet. To activate it, you will only have to press one button and all the other actions will be done by the Nominex system. This type of farming was designed for new users who had no prior experience with DeFi, without taking either the yield rate from them. 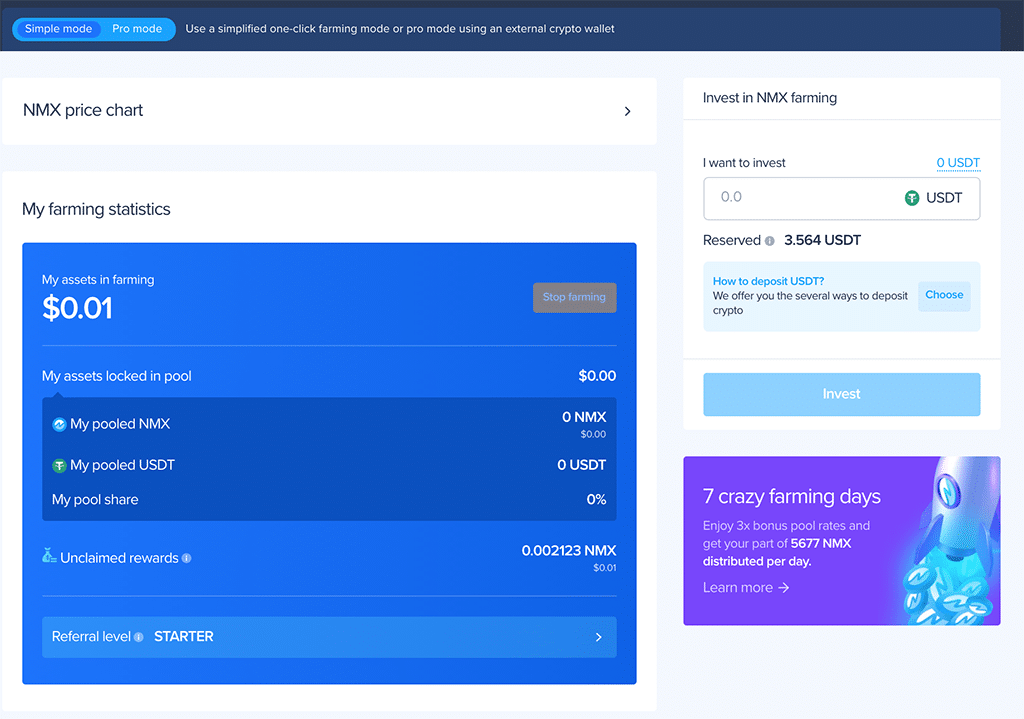 This is the first farming model launched by Nominex and it follows the traditional way of DeFi in which you connect your account to Metamask or other third-party wallets. Now with two options available to Nominex users, it should be noted that choosing Pro mode over the Simple mode will not affect profitability, bonuses, and the host of other incentives attached to the platform.

While the only difference is in the technical and interface parts. You can easily switch between these two modes as needed. The interface for the Pro Mode is shown below with the link to connect to a wallet boldly indicated on the bottom right corner. 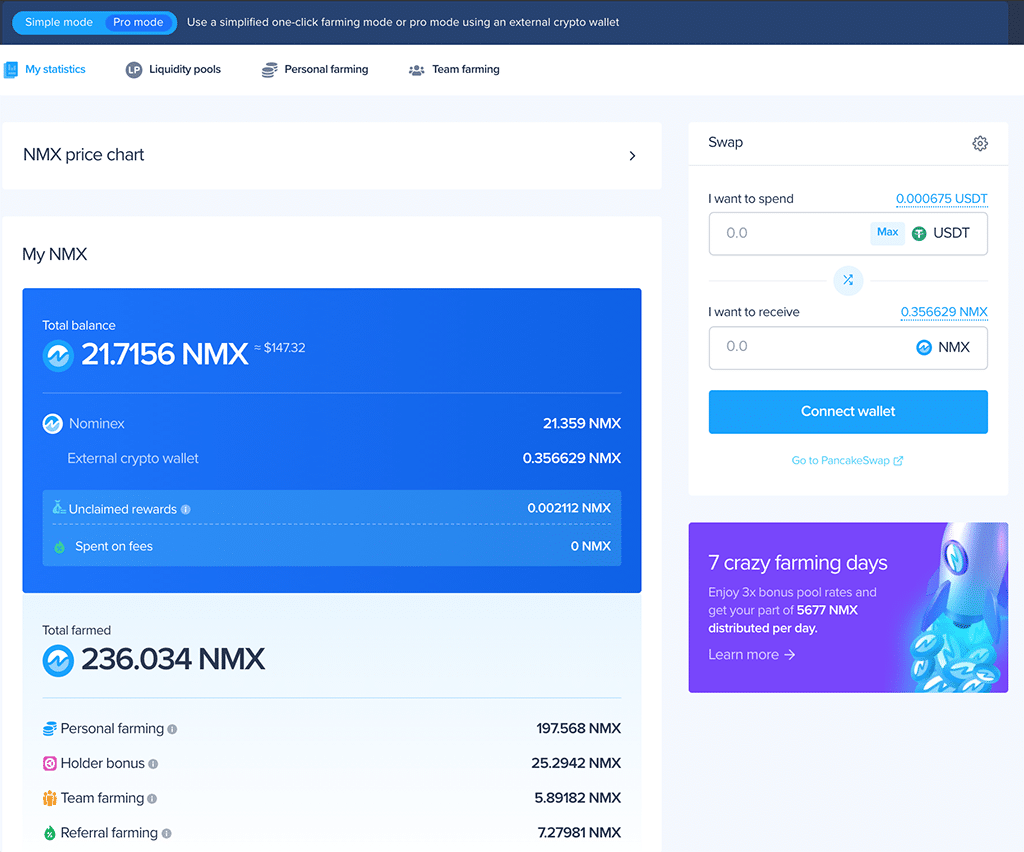 Why Do You Need Simple Mode?

Nominex knows that the technical aspects were difficult for some new users like my father, who would not have even gotten started on farming with the wide array of options available. I was able to walk him to complete his registration, and I recommended the easy to use Simple Farming Mode to him.

Today, my dad actively farms on Nominex with a positive tale of the good yield on his capital, even better than the investment options more native to him. The days of experiencing difficulty with farming and pitching tents with DeFi opportunities in general are now in the past!

Nominex is building an ecosystem filled with easy-to-adopt services designed to attract even more users. This ultimately will make the entrance for people “not from the crypto” to be much easier.

The cryptocurrency ecosystem is very dynamic with new products getting launched on a daily basis. Many of these products are difficult to get engaged with but with platforms like Nominex that strives to simplify engagement models, anyone can now get started with DeFi investments. If my dad could become a liquidity farmer, then I believe anyone out there can also join the train and become one of the pioneers of the digital currency ecosystem.

Guest Posts
Author: Devan Harmon
Devan is a crypto trader and Bitcoin enthusiast. He does his best to keep up to date with all the latest trends and innovations in the blockchain industry and likes sharing his expertise.
Share:
Thank you!

A lot of people still have some prejudges against cryptocurrencies. They believe that cryptos are the roots of financial evil. However, step by step this myth is being broken.

If you are one of these traders who are looking for crypto exchanges, this article is for you.

Nominex is the next step in the evolution of exchanges around the world thanks to its unprecedented affiliate program unlimited referral levels to earn bonuses from.