An upstart innovator pegged to be the hottest ICO this summer, which some say could break the 9-digit mark, made history when it launched pre-ICO options.

ICOs are becoming so hot that one issuer has been able to sell options prior to the funding round. Monkey Capital, a decentralised hedge fund that invests in SpaceX supply contracts, hostile public company takeovers and Blockchain systems, while simultaneously speculating on large blocks of Crypto, made history Thursday by becoming the first ICO to successfully sell options.

The options, called COEVAL, trade on Waves Decentralised Exchange (DEX), and did robust business out of the gate during a discussion in which Monkey Capital’s CEO talked to hundreds of investors in the company’s Slack about valuation premiums. Volume in COEVAL contracts was about 15 BTC on Waves DEX. That’s about a third of Bancor’s total volume on Bittrex and 60 times Chrono’s volume on the same exchange. Bancor and Chrono are considered some of the watershed ICO’s of 2017, so the comparisons are meaningful, say analysts.

“If I have to give Monkey Capital a rating, I give it 6 out of 5 stars,” US nationally-syndicated radio host Chris Waltzek, who has interviewed leading financial names such as billionaire hedge fund managers Jim Rogers and George Soros. Waltzek announced the surprise rating while interviewing the company’s founder and Managing Partner Daniel M. Harrison in a segment late on Thursday. “I haven’t seen a product like this in 12 or more years; it’s something from the future,” he added.

Earlier in the week, Huffington Post labelled Monkey Capital’s ICO “the billion dollar baboon” with senior writer Azeem Khan reporting that “chat rooms already have the offering pegged to raise a billion dollars or more, becoming the first ever 10-digit sum raised in a crowdfunding campaign.”

Reddit and Blockchain social media star blackpete also threw his chips in with the gorilla in a Tweet to followers: 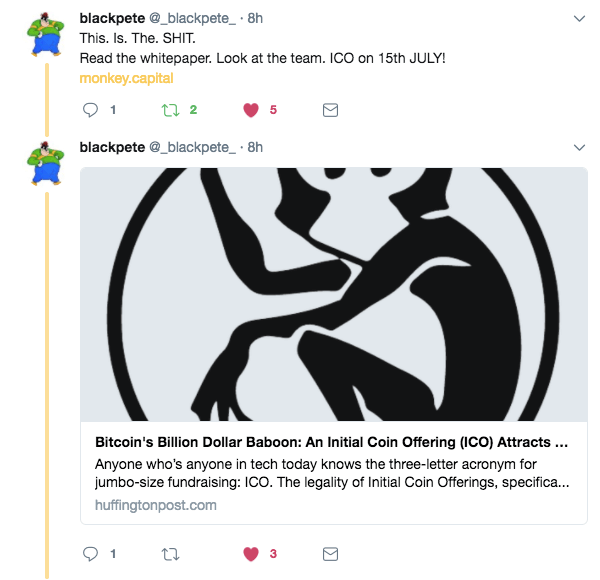 On July 15, Monkey Capital will launch its ICO when buyers will have a chance to subscribe for Monkey (MNY). Some months ago however, the management team distributed tokens called COEVAL out to friends and family, as well as “hot girls” according to Harrison.

COEVAL allows the holder to purchase MNY tokens, which are available at the auction, at a reduced fixed rate. After the company let slip the existence of the tokens, they held an impromptu Slack wherein Harrison explained the functionality and pricing of the tokens to investors, and volumes exploded on Waves DEX.

“We are experimenting here,” Harrison told Coinspeaker in an exclusive interview. “What’s important is that we focus on the MNY ICO coming up and don’t get caught up in speculative pricing events. But certainly, to make history by creating the first ever Crowdfunding Option – that’s pretty satisfying. You can’t help but pat yourself on the back a little bit; after all, what is that if nothing other than innovation itself?”

Goldseek Radio’s Waltzek concurred with the idea that Monkey Capital’s innovation was a breakthrough for crowdfunding campaigns. “It’s a gamechanger on so many levels. Just read the company’s White Paper and find out how incredible their ideas are,” he told Coinspeaker.