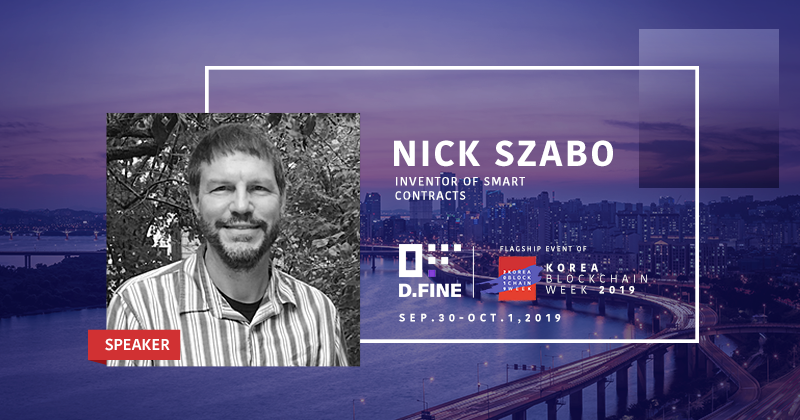 Nick Szabo, who invented the phrase and concept of “smart contracts” in 1994, along with Dr. Adam Back, who invented the “PoW” algorithm, applied in the cryptocurrency mining system, will present themselves for the first time in Korea at Asia’s largest blockchain event, Korea Blockchain Week (KBW2019).

Veterans of Blockchain Technology Industrialization Rise Together on Korean Stage

Korea Blockchain Week, which will be hosted by FactBlock, a blockchain accelerator, is their second annual blockchain week in Korea since 2018. During this week Nick Szabo and Adam Back will both deliver their keynote address during the main conference D.FINE.

Nick Szabo, the ‘father of cryptocurrency’ has rightfully earned this name for being one of the most important figures of the cryptocurrency industry. He first devised the concept of “smart contracts” in 1994, and in 1998, proposed the principles and structures of Bitcoin’s predecessor, and cryptocurrency known as “Bit gold”. By virtue of this information, there has been growing speculation that he may be Satoshi Nakamoto, the founder of Bitcoin, but he has repeatedly denied it. 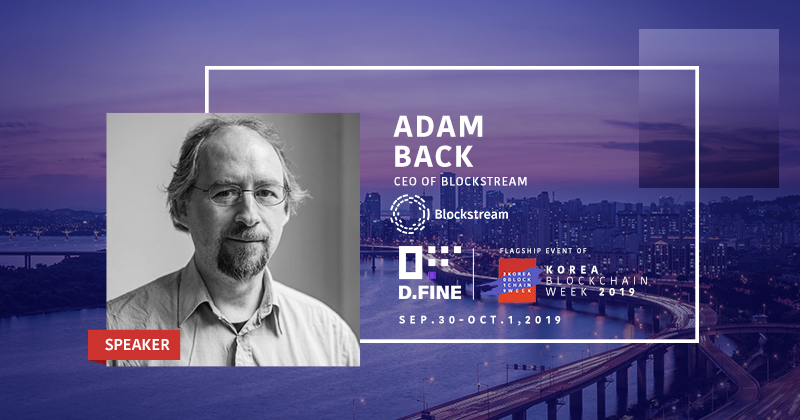 Dr. Adam Back is CEO and co-founder of Blockstream, a company that seeks to further the development of bitcoin and blockchain technology. He is the inventor of the proof-of-work system Hashcash, initially used to limit email spam and denial-of-service attacks in 1997. Since then, the PoW system has been utilized as a mining algorithm for major cryptocurrencies such as Bitcoin and Ethereum.

Nick Szabo and Adam Back, two veterans of blockchain technology industrialization, will present keynote addresses at D.FINE to pinpoint the present state of blockchain and cryptocurrency while talking to the audience on which opportunities the global companies and governments will seek in the blockchain sector in coming years.

FactBlock, the organizer, states that Korea Blockchain Week will be filled with in-depth conferences, various events, meetings and parties, running from the 27th of September to the 4th of October.

‘Blockfesta 2019’, hosted by BlockMedia, a media specializing in blockchain will be held on the 27th at the National Assembly building, while the main conference, D.FINE, will be held for two days on the second and fifth floors of the Intercontinental Parnas Hotel starting on the 30th of September. In addition, the official networking party for D.FINE will proceed on the 1st of October.

What’s more, for a week, the various meetings and networking events to be held will be a revived boost to the blockchain industry.

A crucial factor of D.FINE, held from September 30th to October 1st at the Grand Intercontinental Seoul Parnas, is that it will be the first Korean conference to be hosted by leading Korean media conglomerates such as Korea JoongAng Daily, Hankyoreh, The Seoul Economic Daily, The financial news, and Block Media, alongside co-hosts FactBlock, and Hashed. Moreover, D.FINE is sponsored by major cities, Seoul and Busan.

“Korea Blockchain Week, the second of its year will be Asia’s largest blockchain weekly event.”

“the event will provide a glimpse into the current and future state of the blockchain industry, while providing a useful opportunity for industries, policy agencies and the academic world to interact with each other.”